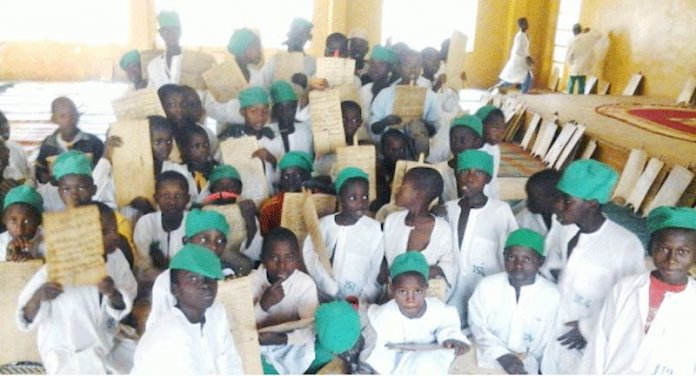 Mother tongue is said to be the brain behind the successes of advanced nations and in their ability to teach with it in schools. Panti Community in Alkaleri Local Government Area of Bauchi State has understood the powers inherent, and in collaboration with DFID/UNICEF, through the Tsangaya mode of teaching and learning, it is positively retelling a story in its reduction of out-of-school children. Kuni Tyessi reports

It was a class of approximately 30 square meters in a rural community known as Panti in Alkaleri Local Government Area, which is a distance of about 200 km from the heart of Bauchi State, North-east Nigeria. It could accommodate a little above one hundred pupils of both boys and girls who sat separately on mats based on gender.

There was no specification of classes as they were aged between eight and 12. They wore no uniforms and majority, mostly the boys, had exercise books in which they copied all that had been written on the blackboard by the teacher, who also doubled as the school facilitator. He defiled English, the acceptable formal language and Nigeria’s lingua franca and spoke in Hausa, the indigenous language of the LGA.

The children paid rapt attention as the teacher whose mannerisms of instilling knowledge proved that he has a passion for the job held sway. He made use of illustrations, jokes, familiar objects, everyday occurrences and even the pupils as live examples in buttressing the points, as well as solving the sums through the eyes of indigenous flavours.

Mallam Idris Sali Barchi as he later introduced himself, said he, alongside others, had been trained on how to teach the pupils in a type of education which is a blend of Quranic and western style of teaching also known as the Tsangaya. This was supported by the Depart for International Development (DFID) and the United Nations Children’s Fund (UNICEF), through the provision of a classroom and two toilets, a gesture which has in turn boosted enrolment from thirty plus to over a hundred with girls being in the majority.

With the provision of toilets which supports, encourages and provides dignity and privacy, a quest in the lives of girls, parents and the girls alike have seen the need to become open minded in the face of acquiring education, even if not for advanced purposes, but for daily interactions which are a necessity in, and for human existence.

In the recent document released by the Universal Basic Education Commission (UBEC) titled ‘2018 National Personnel Audit (NPA) Report on Public and Private Basic Education Schools in Nigeria’, public almajiri/Tsangaya schools in Bauchi State are 10 and the estimated enrolment has been pegged at 1,686, which has reduced the population of out-of-school children in the state which is estimated to be 354,373.

Also, in terms of zonal distribution of teaching staff in Tsangaya schools, the north-east has a total of 778 male teachers as against 273 female teachers, which gives a total of 1,051 academic staff, out of which Bauchi State has a total of 147 males and 26 females, a total of 173. With the daily enrolment of girls into basic education, it is expected that the number of female teachers will be increased for role model purposes and gender parity, among others.

The teacher went down memory lane and narrated how the school started over a hundred years ago and like folklore, had been passed down to generations with the sole aim of teaching only Quranic education to almajiris and with lessons under trees and temporarily built altar-like spaces and without the inclusion of western education. With this, girls were deprived from attending due to lack of exposure and cultural ethics as they would not accept to sit with their male counterparts and be taught. However, they got informal education at home.

The use of Hausa Language to teach in the Tsangaya mode of learning was used to break all barriers and ‘formalities’ that might have been created by the English Language which is borrowed as a result of colonialism, even though one of the most spoken globally. The teacher said with the use of Hausa Language, the children who had already mastered the tongue, are able to first think in their indigenous language before translating it to any other, thereby giving them a firm grasp of what has been taught and the confidence to translate, by way of thinking, into another.
He added that the use of mother tongue was in no small measure responsible for the large turnout in terms of enrolment and for the girls accepting to be taught with the boys with no form of coercion.

“Before DFID/UNICEF intervention, we were using semi-raised platforms. When UNICEF came and observed this, they advised that they would like to see us go modern in terms of acquiring knowledge. So we pleaded with the teacher of this place to give us the opportunity to also use the venue, and so we met twice a week, Wednesdays and Thursdays.

“So we were teaching and learning under a tree. From there we got this building and we are very happy that a school has been built for us and toilets have been provided. This has encouraged enrolment especially from the out-of-school pupils, as well as the almajiris. Some even come from other LGAs as far as from Ganjuwa.

“Tsangaya system of education which accommodates those that are into begging of alms and almajiris is the mode of teaching here. It is a blend of Arabic and western system of education and that is why after the mallams teach them Quranic education, they allow us to come and teach them western education. With this blend, they are able to understand faster.

“This is a language used at home and which they are familiar with. With this, they are able to learn and understand better. Hausa is central even though there are other minor languages. The school had mainly almajiris who were not more than 30 and there were no girls at all as it was not open to them. But today, there are 59 girls as against 46 boys. Today, girls are involved which is a plus.
“Initially, the girls will not accept to stay in the same place with the boys. But now with civilisation and proper understanding, they are accepting to be taught alongside their male counterparts.”

The Head Girl of the school, Aisha Yunusa, explained what she is benefiting from the DFID/UNICEF intervention which she said has attracted her to several women who have excelled and so, she hopes to further her education and end up as a medical doctor.
“We understand what we are taught. Initially, when we started sitting in the same class with the boys, we felt very uncomfortable because we were not used to it. With time, we realised that there is actually nothing to fear.

“Now, the benefit of going to school has exposed us to knowing a lot of things which we didn’t know before. I want to continue because I am attracted to several women whom I have seen have excelled. I want to be a medical doctor and help humanity.”

The Head Boy, Dauda Shuaibu Panti, a witty child of about 11, highlighted the benefits of blending mother tongue into western education, saying that with the mix in the style of teaching, assimilation has become easy and a smooth sail.

He added that with the DFID/UNICEF intervention and in the donors’ understanding of the power that mother tongue wields, parents have continued to release their children and he has been able to encourage others within his neighborhood about the benefits of education, bearing in mind that western education has upheld their indigenous language as the best mode of learning within the community. It is also a way of saying that no language to superior to the other as long as the ends justify the means.

“When we were going to schools which had English Language as the mode of communication, we found it very difficult and tasking to understand a lot of things. But now with Tsangaya system of education, we understand everything we are taught. This is because English is not the language we are used to. But here, with Hausa, learning is fun.

“With this building donated to us, many parents are releasing their children for school and I have been able to encourage many of friends to enrol and indeed, many are here learning along with me.”

With the aforementioned statistics, there is proof that the number of out-of-school children is gradually declining and there is hope that it will in no distant future be a thing of the past.
Furthermore, it resonates with the belief that it is better to move, even though at snail speed than not moving at all. With the unwavering support of international donors, in collaboration with state governments, it is hoped that the 10.5 million out-of-school children will someday be kept on the shelves of Nigeria’s history.