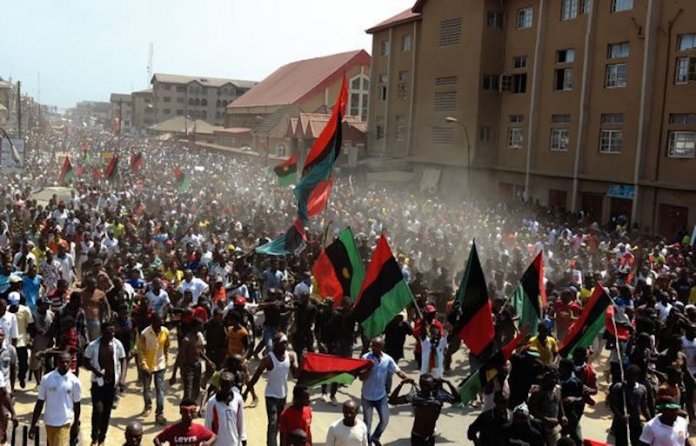 Abia State capital, Umuahia, came to a standstill yesterday as thousands of mourners flooded the city for the burial of His Royal Majesty, Eze Israel Kanu and his wife, Ugoeze Sally, parents of the leader of the Indigenous People of Biafra (IPOB).

The Afaraukwu monarch died early December 2019 barely three months after his wife passed on in circumstances their children linked to the destruction of their palace during the military operation of September 14, 2017, which had forced them into exile.

Biafra freedom songs rent the air as the bodies of the royal couple, who strongly believed in the self-determination struggle being championed by their son Nnamdi Kanu, were conveyed in a long procession through the major artery of the capital city.

The ceremony passed off without any ugly incident despite the huge crowd that took part in the traditional procession. The bodies were conveyed in separate hearses with two horse riders leading the procession which commenced from Madonna Hospital mortuary along Aba Road. From there the procession headed to the headquarters of Umuahia North local government, then to Orie Ogwu Afaraukwu market before they were taken their home and finally to the church.

Before the burial, there was altercation between the Abia State Police Command and IPOB, whose members the police had threatened to arrest should they attend the burial.

There was no government presence from the South-east governors. However many dignitaries graced the occasion, including Senator Enyinnaya Abaribe, presidential candidate of PDP and former governor of Anambra State, Mr. Peter Obi, and Senator Victor Umeh, among a host of prominent traditional rulers.

But there was no denying the fact that the various pro-Biafra groups thronged Umuahia in their thousands, though without displaying their insignias, to pay their last respect to the royal couple they regard as “father and mother of Biafran struggle.”

He called on Nigerians to mend their ways as everyone would give account before God of the kind of life they lived while on earth.

In their tribute read by the second son, Kingsley, the family of Eze Kanu praised their parents for giving them proper upbringing and bequeathed to them “opulence of health, education and a close knit family built on a foundation of love for one another and knowledge of God.”

Recalling the role the couple played in supporting the Biafra cause, the family stated that the lives and death of their parents “was ordained by heaven to usher in an era of freedom not limited to Biafra alone but will extend to the whole of black Africa and even beyond.”

“In that respect they remain immortals to every generation that will ever walk this sacred land of Biafra. That is the greatest legacy, that is their gift to our nation and one which God purposes for them,” the family said.

Senator Enyinnaya Abaribe, in his remarks lauded the Biafra activists for their peaceful conduct, saying that it was a mark of respect to their elders who had come to honour the royal couple.

He said that even in death the names of Eze Kanu and his wife, Sally would never be wiped out in generations to come.

Senator Victor Umeh described Eze Kanu as “a great king” and lauded the federal government for respecting the solemnity of the burial ceremony with the peaceful conduct of the security agents.

“They have done well by allowing us to bury the  monarch,” he said, adding that the tension generated in the run up to the burial ceremony did not deter him as he had in fact, “prepared for the worst.”