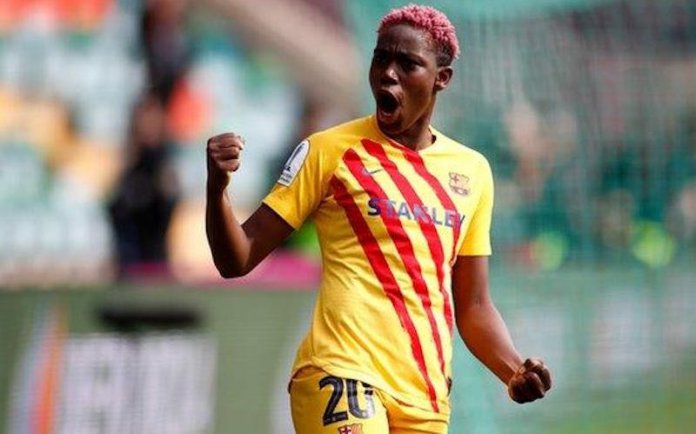 Nigeria’s Asisat Oshoala is hungry for more success with Barcelona Femenino after winning her first major trophy in Spanish football.

The 25-year-old scored a brace on Sunday as Barcelona thrashed Real Sociedad 10-1 to clinch the maiden Spanish Women’s Super Cup in Salamanca.

“But my professional priority is to keep doing well and winning, so I can’t take my eyes off the targets.

“We still have the league, UEFA Women’s Champions League and the Spanish Cup to contest this season as a team.”

Unbeaten Barcelona currently sit atop the Primera División as they seek their first league title in five years and they face Spanish rivals Atletico Madrid in the quarterfinals of the UEFA Women’s Champions League next month.

Oshoala who netted a late consolation for the Catalan club in their 4-1 loss to French side Lyon Feminines in last year’s continental final is keeping her feet firmly on the ground.

“Individual ambition is same as a collective one for the team this season,” she added.

“We do not have the satisfaction yet because we’re challenging for success in all competitions, so we need to keep going.”

The maiden BBC Women’s Footballer of the Year winner scored at the 2019 Women’s World Cup to help Nigeria reach the last 16 in France.

She joined the Spanish outfit initially on loan from Chinese champions Dalian Quanjian in January 2019 before signing a permanent deal five months later.

Oshoala moved to Quanjian in the Far East in February 2017 from English side Arsenal Ladies with whom she won the Women’s FA Cup at Wembley in May 2016 .

She finished as the Chinese Women’s Super League top scorer in 2017 with 12 goals to help her club to the title same year.

Oshoala, who began her European career at Liverpool Ladies, won her third Women’s Africa Cup of Nations with the Super Falcons in Ghana in 2018, scoring three goals as Nigeria lifted the title for a ninth time.