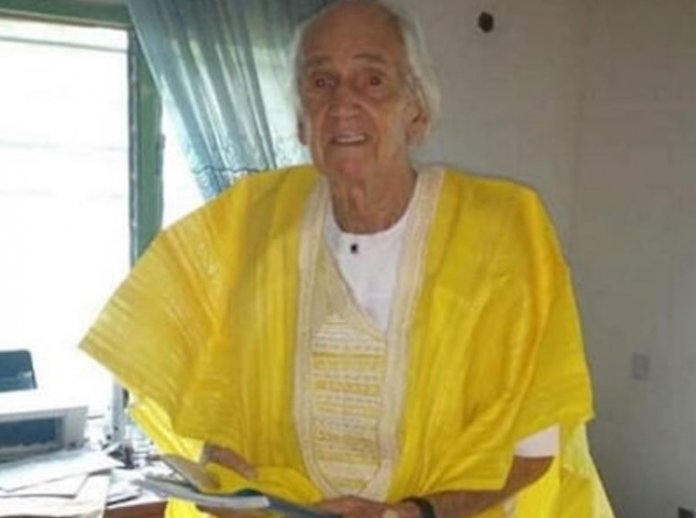 It was flown aboard a British Airways aircraft that touched down at the Murtala Muhammed International Airport, Lagos about 6.00 p.m.

Exactly, 7.01 p.m. the sealed pack containing the ash was cleared out of the arrival hall .

The old students danced as they received and lifted it to the admiration of airport workers and passengers.

There was excitement in their faces amid jubilant drumming and dancing.

It was received by old students association of the school, whom Gargiulo adopted as his children.

Old students of the college gathered at the arrival section of the Lagos international airport to receive the ashes. Decked in T- Shirts bearing many inscriptions, they sang and danced awaiting the arrival of the aircraft.

While awaiting the arrival of the aircraft, old students of the college took time to celebrate the life and times of their former principal.

Speaking in an interview, the President of Ajuwa Old Students’ Association, Rear Admiral Sanmi Alade (rtd) described his five-year stay in the school under the tutelage of the late principal as memorable.

He said the old students were very excited that his wish to be buried in the school after cremation has been achieved.

The burial is scheduled for February 22, 2020 in his house in the school premises in Okeagbe .

“He was a good man, leaving the school in 1978, I remember his high sense of discipline.

“Our moments with him remain eternal. It is a great honour for us; his old students that the ashes is returned to us for burial. We could not have asked for anything greater.

“GG as we fondly called him brought education to our community. He was a good man and brought discipline to the school. We mentored us on the gains of discipline.”

The ash of GG’s cremation was accompanied on British Airways by two former students of the college namely : Mike Fatogun and Kehinde Momodu who are based in the United Kingdom.

Gargiulo, an Anglo-Italian, from United Kingdom, arrived in Nigeria on January 5, 1960, shortly before independence on October 1, 1960. He immediately took up a teaching appointment at Igbobi College, Yaba, Lagos.

He breathed his last in his United Kingdom home and lived for 52 years in Nigeria, touching lives in Okeagbe-Akoko and other communities in Ondo State.

Born on August 13, 1932 in Port Vale, United Kingdom to an Italian father and a British mother, GG attended the University of Cambridge, where he graduated with a Bachelor of Arts (B.A.) degree in Natural Science, Physics/Geology, after which he obtained his Masters of Arts (M.A) in the same discipline.