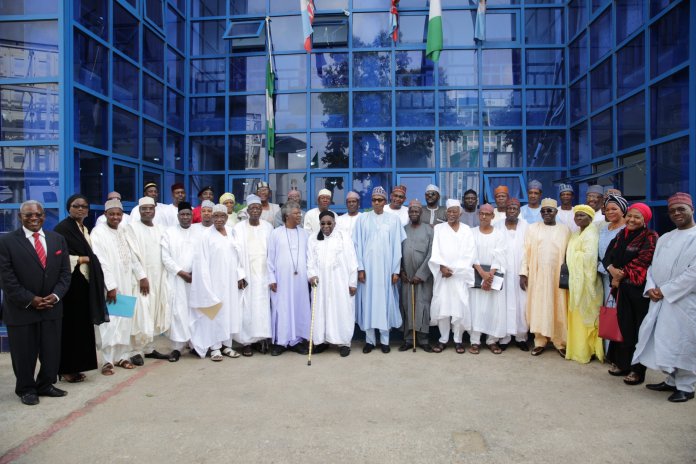 The presidency and the Northern Elders’ Forum (NEF) exchanged brickbats yesterday over the stewardship of President Muhammadu Buhari.

NEF spokesman,  Professor Ango Abdullahi, fired the first salvo when he accused Buhari of failing Nigeria by his inability to tackle the security challenges facing the country.

Special Adviser to the President on Media and Publicity, Mr. Femi Adesina, dismissed the claim, saying contrary to assumptions, NEF is a one-man squad, made up of only Abdullahi, a former vice chancellor of Ahmadu Bello University(ABU),  Zaria.

According to Adesina, NEF,  which cannot boast of credible membership, “is merely waving a flag that is at half-mast” while the president is focused on his job.

He said: “Professor Ango Abdullahi on Sunday signed a long-winding statement on many issues relating to the North, and purportedly to the country.

“The former vice chancellor signed the statement under the banner of Northern Elders Forum (NEF). Hearing that title, you would think the body was a conglomeration of true elders. But the truth is that NEF is just Ango Abdullahi, and Ango Abdullahi is NEF. It is a quasi-organisation that boasts of no credible membership, and its leader is akin to a General without troops.

“Before the 2019 presidential election, the one-man army called NEF had shown its antipathy against President Muhammadu Buhari and its preference for another candidate. They all got beaten together.

“NEF is merely waving a flag that is at half-mast. President Buhari steadily and steadfastly focuses on the task of retooling Nigeria and discerning Nigerians know the true state of the nation. They don’t need a paper tiger to tell them anything.”

Earlier, NEF had flayed the president for allegedly failing to tackle the security challenges facing the country.

It also lamented the pervasive poverty, particularly in the northern region, which it alleged had worsened under the Buhari administration.

The forum in a statement yesterday by Abdullahi, its convener, said the relationship between insecurity and poverty was fundamental, adding that Buhari’s administration does not appear to have any idea on how to provide relief or solution.

Abdullahi expressed regrets that in spite of  consensus among Nigerians that the Buhari administration requires a new resolve, approach and leadership in the fight against the security challenges, the president appeared either totally isolated or in denial over the result of his perceived failures to secure Nigerians.

He said: “The Northern Elders Forum has refrained from comments on major developments relating to management of national security and governance because it is convinced that these times require the highest level of responsibility and circumspection in the manner elders and leaders in the country contribute to the search for solutions to the multiple problems which face them.

“It has become necessary and appropriate, however, to make public the position of the forum on important matters that affect the manner Nigerians live and the future we must address.

“The forum regrets that by any standard of judgement, the leadership of President Buhari has failed the country in the vital area of improving its security.

“Poverty, particularly in the North, and massive social security have worsened under this administration. The relationship between insecurity and poverty is fundamental, but the administration does not appear to have any idea on what will provide relief or solution to the situation.”

He explained that although the group, during the 2019 electioneering, had warned Nigerians that  Buhari could not lead Nigeria into a secure and prosperous future, it derived no joy from the fact that the president had not disappointed.

“It is shocking that in spite of unprecedented consensus among Nigerians that the administration requires a new resolve, approach and leadership in the fight against multiple security challenges in the country, President Buhari appears either totally isolated or in deep denial over the result of his failures to secure Nigerians.

“With this type of mind set, it is difficult to see how President Buhari can accept the challenge to radically improve his handling of our security situation,” NEF added.

The statement urged Nigerians to  continue to raise their voices and organise through all legitimate means to demand that the administration addresses major failings in Buhari’s perception of “our   situation and his response to our demands for our rights to security.”

The group urged the president to overhaul  the leadership of the nation’s security and public safety agencies, and ensure “higher levels of competence, integrity and accountability in the manner our security agencies deal with security challenges.”

It appealed to  religious leaders and Nigerians  not to allow insurgents put them against one another.

It also condemned the “tactic of targeting Christians and publicising their executions by an insurgency seeking to exploit our different faiths.”

“These are times when we must unite and resist a common enemy as well as demand that our leaders protect us all as Nigerians,” it stated.

The forum also noted the comments of the Chairman of the Board of Trustees (BoT) of the Coalition of Northern Groups (CNG), which recently announced the establishment of a northern security outfit and the response to the opinions of the Sultan of Sokoto, Alhaji Sa’ad Abubakar, who rejected the bid by CNG to float a security network for northern states, saying it did not conform with the culture of respect and reverence for leaders, which Northerners are noted for.

“The forum demands that the chairman of BoT of Coalition of Northern Groups should apologise to the Sultan of Sokoto without reservations.