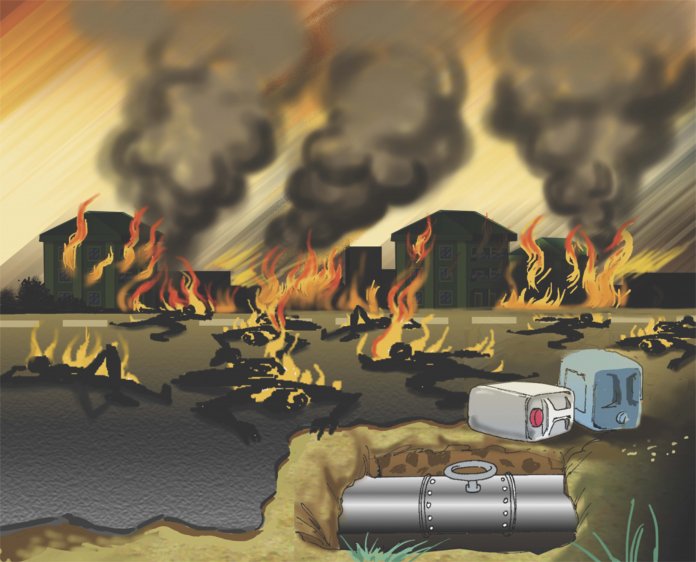 Nothing explains Nigeria’s notoriety with human-induced petrol pipelines’ fires better than absolute greed, collective recklessness and utter disregard for health and safety practices. It is therefore no surprise that the number of fatalities as a result of pipeline bursts and associated fire explosions is simply staggering. And the numbers will continue to rise until lasting solutions are found to the problem.

Before the recent explosion in Ekoro area of Abule-Egba in Lagos on 19th January this year, there have been several others, claiming thousands of lives. In October 1998, no fewer than 500 villagers in Jesse area of Delta were burnt alive while scavenging for petrol from a ruptured pipeline. Two years after that, precisely in July 2000, another 250 people were killed while doing the same thing near Jesse, as well as 100 in Warri in the same month. In November of the same year, no fewer than 60 people died in another pipeline fire that occurred in Ebute area of Lagos. By June 2013, the country reported another 125 deaths from pipeline fire in Umuahia area of Abia State. In May 2006, about 150 people were burnt to death around the Atlas Cove in Lagos and about 500 more in December as a result of similar explosion in Abule Egba area. Following that was an explosion in Ijegun area of Lagos when a bulldozer struck a petrol pipeline in 2008, and then two more in January and July of 2016 in Akulagba area of Warri South and Arepo in Ogun respectively.

While the list seems endless, report on the significant impacts of the recent Lagos’ pipeline fire is yet to come in, but it is certain that there are casualties – already news reports have estimated at least five deaths. Most appalling is that these deaths have become mere statistics in Nigeria such that many would have viewed the number of latest casualties as ‘insignificant’. Yet, every time a Nigerian falls to an avoidable death such as from these pipeline fires, it signifies nothing more than the plain absence of responsibility or to put it clearly, lack of commitment to the welfare of the citizenry.

In reality, petroleum pipeline breakages and related fire outbreaks are regular accidents associated with the oil industry everywhere in the world. They happen in other jurisdictions, including the United States which in August 2019 had one – the Enbridge natural gas pipeline – that ruptured and killed one person while leaving five people injured. The challenge in Nigeria is the sheer disregard for measures to stop a recurrence. The recent Lagos fire was reportedly caused by the activities of vandals, who were said to have cracked into the pipeline of the Nigerian National Petroleum Corporation (NNPC) to steal petrol. It is a familiar story.

The vandals or petrol thieves often resort to crude means of cracking the pipelines which they clearly do not have rights to access and end up leaving them open with products flowing out to an open environment. This subsequently results to explosions as it did in Abule Egba on the night of 19th January. Even when the Lagos State Emergency Management Agency (LASEMA) and the NNPC (which owns the pipelines) report that the situation had been brought under control, the fact remains that these pipelines remain unsafe. Given that the possibilities of third-party intrusions on its pipelines are almost inevitable, we are curious to know if there is a crime map with which to track the repeated break into the NNPC pipelines.

These crimes are heavily influenced by humans, and in an era where crime prevention is greatly aided by technology and additional local intelligence, it is no longer enough for the authorities to throw up arms in the air each time a bust in its pipeline roasts Nigerians. Considering that such crimes are also usually local – that is, they almost never happen successfully without local cooperation – we would also ask if there is a local intelligence database from which to draw up preventive measures. A multi-dimensional strategy to the issue should be pursued by blending technology with local intelligence.

Quote
In an era where crime prevention is greatly aided by technology and local intelligence, it is no longer enough for the authorities to throw up arms each time a bust in its pipeline roasts Nigerians