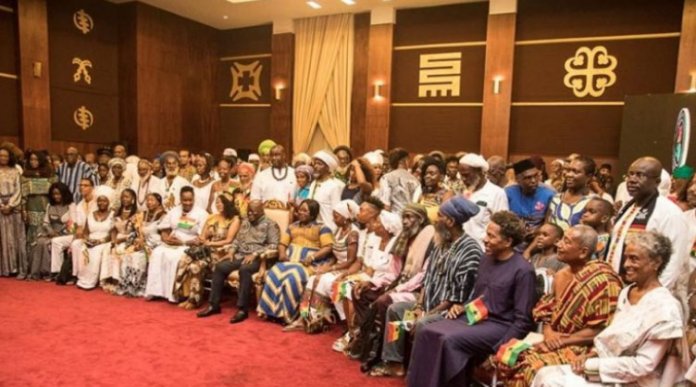 celebrate the holidays with their extended families. Airlines, like British Airways (BA), make a killing on this route by offering return tickets to Accra and Lagos for as much as $2,400 (£1,800).
Observing the persistent seasonal price gouging for a group of consumers without much in the way of choice, a luxury car leasing company in London spotted an opportunity to disrupt BA and Virgin Atlantic’s business model.
The new venture – Black Star Airlines – leased a private jet for ten days over Christmas and New Year, offering return flights to Accra for just $1,850 (£1,399). The offer has been gobbled up, with over 7,000 tickets sold so far.
Update 17 December => Black Star Airlines did not fly this year, as it says “registrations didn’t reach the levels required to fly”, but it claims it will do so next year.
Interestingly, a significant number of buyers are Nigerians who want to spend the holidays in Ghana or save on costs by connecting to Lagos via Accra.
The relative ease of obtaining operating permission from the Ghana Civil Aviation Authority is what makes the entire operation possible. The Nigerian Civil Aviation Authority may not have been as cooperative as their counterparts in Ghana.
The comparison between the two authorities is a moot point because the default destination is Accra – even though, statistically, there is a far greater demand for flights to Lagos from Nigerian travellers. UK census figures from 2016 found 96,000 Ghanaians living in Britain, compared to 196,000 Nigerians.
The Blinkered Giant

While it is used less frequently outside Nigeria nowadays, the term “Giant of Africa” remains a mainstay of Nigeria’s self image.
The Nigerian government’s position on trade, investment, and travel is similar in character to that of a remote, previously-important European province that is not yet over its history, and views outsiders and modern ideas with suspicion.
Statistically, Nigeria is the obvious destination for foreign investment in West Africa – particularly from the English-speaking world – but the anecdote above illustrates a growing economic trend in the subregion.
On paper and in practice, investors and tourists are increasingly voting with their feet and choosing Ghana ahead of Nigeria.

In 2018, Nigeria recorded $1.9bn in FDI inflows, down sharply from $3.5bn in 2017.
Ghana, in comparison, recorded $3.5bn in 2018, up from $3.2bn in 2017 – a remarkable feat for a country with a population six times smaller than Nigeria.
As this trend continues, Nigeria is effectively chasing away much-needed money and expertise while its economy remains beset by austerity measures, runaway debt, and a protectionist policy outlook that seems to be set in stone.
During his first iteration as a military Head of State, Nigerian President Muhammadu Buhari’s economic and cultural idea of Nigeria focuses exclusively on a vision of the country as a completely self-sufficient giant whose massive internal market is the be-all-and-end-all of business in Africa.
By completely ignoring the fact that six people slide into extreme poverty every minute in Nigeria, Buhari’s administration has become dangerously obsessed with the idea of turning Nigeria into the economic equivalent of the mythical perpetual motion machine.
Ghana, on the other hand, with its smaller population and lack of a national superiority complex, is not burdened by such problematic ideas. Ghana’s tourism revenue, currently ranked first in West Africa, shows that it’s reaping the rewards of opening up to the world, while Nigeria closes its borders, both literally and figuratively.
Ghana Seizes the Initiative
Much of the Ghanaian government’s efforts to pitch itself as the alternative to Nigeria in West Africa hinges on its ‘Year of Return’ campaign.

In 2019, the country welcomed more foreign visitors than ever before in its post-independence history. The African diaspora is buying into the idea of visiting or moving to Ghana, with predictably positive trade and investment results.
While Nigeria counts a far greater share of the African diaspora as its descendants – having hosted at least four of West Africa’s biggest slave ports in Badagry, Ebute Metta, Calabar, and Okrika – Ghana has cashed the cheque that its bigger neighbour sat on for decades.
Ghana also grants citizenship to people from the African diaspora, which allows returnees the right to own land.
Despite having access to far more unused land than Ghana, Nigeria is failing to grasp the benefits of attracting more visitors. It also appears content with imprisoning itself within its borders.
The only area in which Nigeria does not engage in this self-imposed autarky is in entertainment – probably one of its best-performing economic sectors. Yet, this is also under threat as Ghana tries to become West Africa’s new cultural leader.
The region’s biggest beach festival, ‘Afro Nation’ was held in Accra instead of Lagos this year.
There is another example of a navel-gazing behemoth that conceded its advantage to a smaller neighbour.
Post World War 2, Japan rapidly overtook China in all economic and human development scores by focusing on technology and productivity, while China pursued ruinous autarky under Mao Zedong’s leadership. Until 2011, Japan had a much larger economy than China despite having nearly a tenth of its population.
Snatching Defeat From the Jaws of Victory
Tunde Ajileye, a partner at SBM Intelligence, a Lagos-based political and economic risk advisory firm, has an explanation for Nigeria’s apparent retrogression.
“Prior to now, what compelled people to come into Nigeria was Nigeria’s large market, but this population has gotten poorer and poorer over the last decade. People’s purchasing power has reduced and it is thus not as large a market as Nigerians have come to believe. When you add to this the current government’s stance on trade and foreign investment, that explains why people are looking at other destinations for travel and investment,” says Ajileye.
He also believes that Nigeria’s hostile regulatory environment, and an atmosphere of insecurity and lawlessness, have spooked investors.
“The issues facing MTN are an example of this, as is the bigger conversation surrounding rule of law. There is also the issue of security, particularly kidnapping which foreigners are very prone to. So it is not one thing, but a number of things aggravated by a government not showing up in terms of trade, culture, investment and travel,” says Ajileye.
He also says Nigeria’s baffling policy of navel-gazing and self-imposed isolationism have handed an easy victory to Ghana.
Nigeria’s Loss, Ghana’s Gain

Ghana has successfully positioned itself as the beneficiary of Nigeria’s puzzling withdrawal from the global investment table. As the next largest English-speaking country in West Africa with favourable travel and trade conditions, Ghana has quietly gone about its business. It has a simple and transparent visa policy. It is also strengthening its passport through a series of bilateral travel agreements, allowing for easier access to more destinations for its citizens.
Ghana’s ‘Right to Return’ campaign has generated huge interest among African-Americans and Afro-Caribbeans who want to visit or relocate to the continent. In 2018, Ghana issued roughly 80,000 visitor visas. Between January and September 2019, 750,000 visitor visas were issued, allowing more money and skills to easily flow into Ghana.
A relatively friendly regulatory policy towards foreign investment is also helping Ghana to reduce poverty.
After emerging from military rule at the turn of the century, Ghana has successfully established the rule of law and deepened its democracy. It also suffers less from internal conflict and unrest than its English-speaking neighbours.
Nigeria, by contrast, has a notoriously long and expensive visa application process and a surprisingly difficult path to citizenship.
While its $385bn economy with nearly 200m population should be the most obvious destination for investment and repatriation from the African diaspora, Nigeria has chosen to scare away investors with corporate shakedowns.
It also bullies its smaller neighbours with unilateral border closures, and generally thumbs its nose at the world.
This has created a perception of a country that is as unfriendly as it is poor, which Ajileye believes, can only end badly.
“In Economics, perception is everything. If people believe that things will get better, they usually do, and if people believe that things are going to get worse, they also usually do,” according to Ajileye.
– David Hundeyin is a writer, travel addict and journalist majoring in politics, tech and finance. He tweets @DavidHundeyin