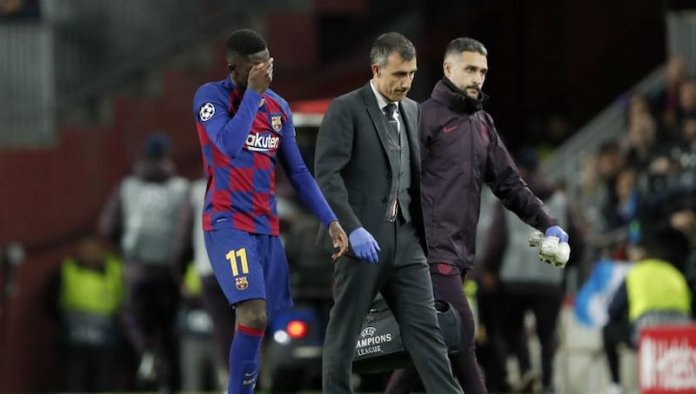 Ousmane Dembélé’s season looks to be over after the winger suffered a relapse of his hamstring injury, tearing the muscle.

The club had put out a short statement on Monday saying that the Frenchman was feeling discomfort in his right leg ‘as a consequence of muscle fatigue’, but subsequent tests have shown the issue to be significantly more severe.

The club’s statement read: “Tests carried out on Ousmane Dembélé today have confirmed that he has a complete proximal hamstring tear in his right thigh. In the next few hours a decision will be made on the treatment to be followed for his recovery.”

Dembélé signed for the Catalan side just two and a half years ago, and his new injury will take him past a full year on the treatment table – having already been injured for over a third of his time at the club.

A variety of muscle injuries and hamstring maladies have, if you’ll forgive the wording, hamstrung the 22-year-old’s career in La Liga, preventing him from getting continuity in the team under Ernesto Valverde and now Quique Setien.

Questions have already been asked about Dembélé’s future at Camp Nou, and those questions will be asked again at an increased volume as the club desperately search for a buyer for the sixth most expensive player of all time.

Barça are already scrambling to monetise some assets in order to make their budget look a little more acceptable, clearing out Carles Perez and Moussa Wague on loans with options to sell while doing their utmost to clear out Ivan Rakitic to any interested party.

The club will make a loss on Dembélé should they sell him this summer, his litany of muscle injuries marking him as damaged goods, but his talent could convince a European rival to take a punt for a reasonable fee.