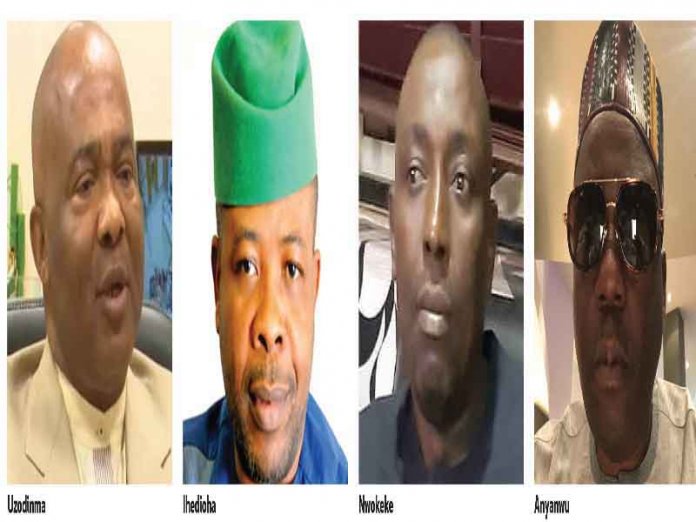 Two weeks ago on January 14, the Supreme Court nullified the governorship election of Emeka Ihedioha of the Peoples Democratic Party (PDP), and declared candidate of the All Progressives Congress (APC), Hope Uzodinma, governor of Imo.

Highly controversial, the judgment catapulted Mr. Uzodinma, who during the March 9, 2019 election had pulled 96,458 votes to settle at fourth place. According to records from the Independent National Electoral Commission (INEC), Ihedioha led comfortably in first place with 273,404 votes to his credit.

Reactions that immediately trailed the judgment on social media shows that Nigerians have lost hope in the judiciary as the last hope of the people. When the government of President Muhammadu Buhari began its onslaught against the equal third and critical arm of government, the judiciary, many were aware of the implication.

In October 2016, officials of the Department of State Services (DSS), bearing what sources said were doubtful search warrants with incorrect names, had in the wee hours of the night, stormed the residence of two Justices of the Supreme Court, Justices Sylvester Ngwuta and John Okoro; as well as two judges of the Federal High Court, Justices Adeniyi Ademola and Nnamdi Dimgba. While Ngwuta, Okoro and Ademola were arrested, the DSS only searched Dimgba’s residence.

Though Justice Walter Onnoghen, who was then in line to become the Chief Justice of Nigeria (CJN), was spared, the events that would follow the illegal invasion of the Justices residence in such questionable hour of day, made it clear for all to see that the DSS was acting out a script and being puppeteered by the presidency.

Following in the footsteps of sister agency, the Economic and Financial Crimes Commission (EFCC), the DSS moved to conduct media trials of the arrested Justices, especially in the case of Justice Ngwuta which the DSS in court alleged had stored N27 million in one of his houses, but then claimed they couldn’t find it.

So far, the case brought by the DSS against Justice Ngwuta has been dismissed twice; first by a Federal High Court in Abuja, and second by the Code of Conduct Tribunal (CCT). The court and tribunal relied on an earlier judgement by the Court of Appeal in which the appellate court held that by virtue of section 158 of the 1999 Constitution, the powers to try judicial officers for misconduct lies on the National Judicial Council (NJC).

For Justice Okoro, the same DSS three years later, in December 2019, cleared him of any wrongdoing. The sum of $38,000 and other items that the secret police carted away from his house were reportedly returned.

The dismissal of Justice Ngwuta by both the Federal High Court and CCT, and the clearance of Justice Okoro by the same DSS that illegally raided his house, portrays the DSS as highly unprofessional. The raid was not only illegal as have been proven by the courts and admitted by the DSS by letting Justice Okoro go, it mirrored the fact that it was a political witch hunt that had the presidency written all over it.

The onslaught against the judiciary was the beginning of the end to when Nigerians lost all hope in the Supreme Court, vis-a-vis the judiciary. The attack on the judges at the dead of night instilled fear in the heart of other justices. Those who had some courage left in them, lost it when later Justice Walter Onnoghen was removed as the CJN, and Justice Tanko Muhammad, sworn in in his stead.

Presently, several persons see the Supreme Court as an extension of the presidency, and the Justices are viewed as being in obeisance to the president. To think of it, not many people found the ruling on the Imo state governorship matter surprising. Judging by the accuracy with which a self-styled prophet, leaked the judgment, many are of the opinion that the “prophet” and Apex Court were playing from the same script.

A coalition of civil society groups recently alleged in a press statement released in Abuja on January 26, 2020 that there were discrepancies between the oral judgment given on the case, and the written judgment which they (Supreme Court) released to the public. According to the group, this discrepancy points to a cover-up by the Apex Court.

The coalition is not the only group of persons to find the judgment questionable. Social commentator, Dr. Chima Amadi, better known on social media app, Twitter, as Mazi Gburugburu, ran a Twitter thread on the controversial judgment.

According to him, the Supreme Court failed by basing its judgment on what he termed “a clearly contrived ‘Oluwole’ result” presented as evidence by the APC’s Uzodinma. “The ‘fakeness’ in the results was so obvious that judges at the tribunals during one hearing, in open court asked INEC lawyers why they had not approached the police to prosecute Hope for forgery,” he tweeted.

“Note that Hope’s results does not have any results for the remaining 68 parties that fielded candidates in the election. Parties like AA, SDP, APGA etc who won seats in the State House of Assembly had no single vote in Hope’s Supreme Court 388 polling units results. What happened?” Chima queried.

If any man was to blame for the loss of hope in the Supreme Court, it would be President Buhari. When the DSS had violated the law in raiding the residences of the justices, and also flouted previous judgment that says the power to discipline a judicial officer was that of the NJC, the DSS lawlessness was sanctioned by Buhari.

The President, through his Media Adviser, Garba Shehu, had waxed lyrical, saying the raid was an assault on corruption and not on the judiciary. However, with the judgment on Imo, Nigerians are of the opinion that the assault had more implications far beyond the judiciary. Having lost hope in the judiciary that should naturally be the last hope of the people, they consider the attack against them; a sad conclusion.

Presently, several persons see the Supreme Court as an extension of the presidency, and the Justices are viewed as being in obeisance to the president. To think of it, not many people found the ruling on the Imo state governorship matter surprising. Judging by the accuracy with which a self-styled prophet, leaked the judgment, many are of the opinion that the “prophet” and Apex Court were playing from the same script. A coalition of civil society groups recently alleged in a press statement released in Abuja on January 26, 2020 that there were discrepancies between the oral judgment given on the case, and the written judgment which they (Supreme Court) released to the public