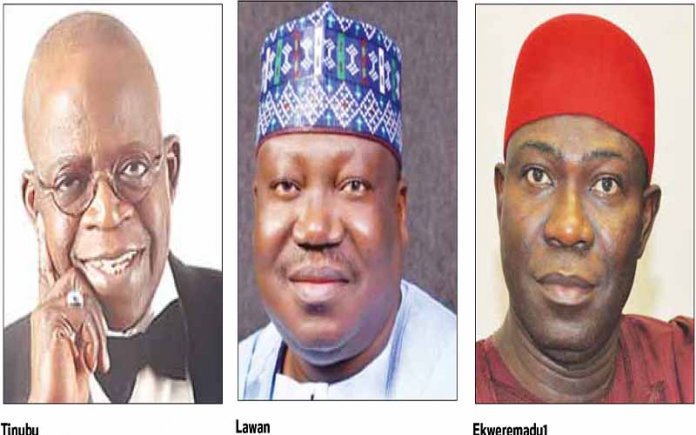 Last Wednesday’s nominal support of Operation Amotekun, the Western Nigeria Security Network by a former governor of Lagos State, Bola Tinubu, might have reinforced the need for the National Assembly to reintroduce the Bill on multi-level policing. Deji Elumoye reports

As the National Assembly resumes from its six-week long Christmas and New Year break this Tuesday, one of the issues that will be up for debate by the federal legislators is the security situation in the country and moves being made at all levels of government to address the issue.

Of note is the recent launch of Operation Amotekun, a security initiative by the six states of Southwest, which generated a lot of controversies, when the federal government first declared it illegal, while groups like Afenifere as well as Southern and Middle Belt Leaders Forum lauded it and even enjoined the Southwest governors not to be distracted in the onerous task of securing the geo-political zone.

The latest reaction to the initiative came from a former governor of Lagos State and National Leader of the ruling All Progressives Congress (APC), Asiwaju Bola Tinubu, who called for dialogue between the federal government and the Southwest governors to resolve the grey areas.

Lending his support to the security outfit, Tinubu, whose position was largely considered politically ambiguous, recalled that similar outfit, the Neighbourhood Watch, was set up during his tenure as governor of Lagos between 1999 and 2007 to complement efforts of the Nigeria Police in combatting crime in the Centre of Excellence.

The former Lagos governor also revisited the need for the establishment of state police across the nation’s six geo-political zones to address the security challenges facing the nation.

Just like Tinubu, a ranking member of the National Assembly, Senator Ike Ekweremadu, had in the past been consistent about the need for the creation of state police.

Ekweremadu, who has been a Senator in the last 17 years, had at various fora in the past spoken about the need for the establishment of state police to complement federal government’s efforts towards stemming the security challenges facing the nation.

As Deputy Senate President in the Eighth Senate and while reacting to the June, 2018 rsacking of 11 Plateau State communities by suspected armed herdsmen resulting in the loss of over 100 lives, Ekweremadu, put the blame squarely on unitary policing, which he described as a misnomer in modern policing especially, federal states.

Contributing in 2018 during Senate’s debate on the Plateau killings on the heels of another carnage in Zamfara, Ekweremadu, who had during an interactive session with Fulbright Scholars, Exchange Scholars, and Graduate Students in his maiden lecture as Professor at the Nelson Mandela School of Public Policy and Social Sciences, Southern University, Baton Rouge, Louisiana, USA, a few days earlier, vowed to sponsor a Bill for the creation of state police in Nigeria.

The Constitution Amendment Bill to Provide for the Establishment of State Police and Other Related Matters 2018” sponsored by Ekweremadu and 74 other members of the Committee on Constitution Review was consequently accorded First Reading in April, 2018.

The Federal Police, according to the Bill, shall be responsible for the maintenance of public security, preservation of public order and security of persons and property throughout the federation to the extent provided for under the constitution or by an Act of the National Assembly.

The State Police, on the other hand, shall be organised and administered in accordance with such provisions as may be prescribed by a Law of the House of Assembly of a State, but subject to the framework and guidelines established by an Act of the National Assembly.

To address the fear of abuse expressed by opponents of State Police in the present dispensation, the Bill provides that the Commissioner of Police of a State shall be appointed by the Governor of the state on the advice of the National Police Service Commission, subject to confirmation of such appointment by the House of Assembly of the State and shall be in office for a period of five years only or until he attains a retirement age prescribed by law, whichever is earlier.

The decision of the State Police Service Commission shall be final and shall not be inquired into by any court.

Meanwhile, a Commissioner shall only be removed by the Governor upon the recommendation of the National Police Service Commission praying that he be so removed on any of: misconduct in the performance of his official duties; serious breach of policing standards; conviction of any offence by a court of law or tribunal, including administrative tribunals set up by the police authorities for internal disciplining of police officers.

It could be as a result of indictment by a judicial body or tribunal for corruption, fraud, embezzlement or other unacceptable conducts in office; bankruptcy; mental incapacity; and participation in political activities of any kind either within or outside the state, including sponsoring or giving aid to any political group of movement.

However, such removal shall be subject to approval by two-thirds majority of the House of Assembly of the State. Importantly, an Act of the National Assembly may prescribe a bi-annual certification review of the activities of State Police by the National Police Service Commission to ensure they meet up with approved national standards and guidelines of policing and their operations do not undermine national integrity, promote ethnic, tribal or sectional agenda or marginalize any segment of the society within the state.

Also on board are six retired police officers not below the rank of Assistant Commissioner of Police representing the geo-political zones (to be appointed by the President subject to confirmation of the Senate), a representative of the Nigerian Bar Association, a representative of the Nigerian Union of Journalists, and the Attorney General of each of the States of the Federation.

The NPSC shall be responsible for the appointment of persons to offices (other than office of the Inspector-General of Police) in the Federal Police; exercising disciplinary control over members of the Federal Police; recommending to the Governor of a State the appointment of the Commissioner of Police, Deputy Commissioners of Police and Assistant Commissioners of Police of the State Police based on a list submitted to it by the State Police Service Commission of the relevant state and subject to confirmation by the House of Assembly of the State

Other responsibilities include the appointment, discipline, and removal of members of the state police below the rank of Assistant Commissioner of Police as well as other functions and powers as may be specified either in the Constitution or a Law of the House of Assembly of a State.

However, in recommending the appointment of a Commissioner of Police, the Commission shall propose three qualified candidates to the National Police Service Commission. The Bill could, however, not make progress beyond the First Reading until the Eighth National Assembly expired. While some blamed it on limited time to undergo the cumbersome constitution amendment processes, other analysts were of the opinion that the body language of the Presidency and ruling party might not favour state police.

Ekweremadu had shortly before the expiration of the Eighth Senate last May emphasised that reintroducing the bill upon the inauguration of the Ninth Senate was one thing, a change of attitude and political will by “critical quarters” was yet another. He regretted that there were still concerns “in some quarters” ranging from funding to possible abuse, and misuse as regional militia, noting that most of the fears were already addressed by the State Police Bill, while the rest could further be addressed by legislation.

With the possibility of the Senate leadership announcing the membership of the Senate Ad-hoc committee on Constitution Review this week, the coast will be clear for the amendments to the 1999 constitution of the Federal Republic of Nigeria in 2020 to begin in earnest.

From indication, it is not unlikely that the State Police Bill may be reintroduced either by Ekweremadu or another ranking Senator, who was part of the 2018, botched exercise.

This much was confirmed at the weekend by a Southwest Senator, who exclaimed: “Yes, we are looking at the reintroduction of the state police Bill once we are back at plenary, at least, we are all witnesses to recent security happenings across the country and the need to beef up security. This why the State Police Bill is being revisited and we are consulting with Senators of like minds with a view to getting the Bill through this time around”.

Hopefully, the leadership of the Senate would provide the necessary platform for the Bill to fly. Time will definitely tell.