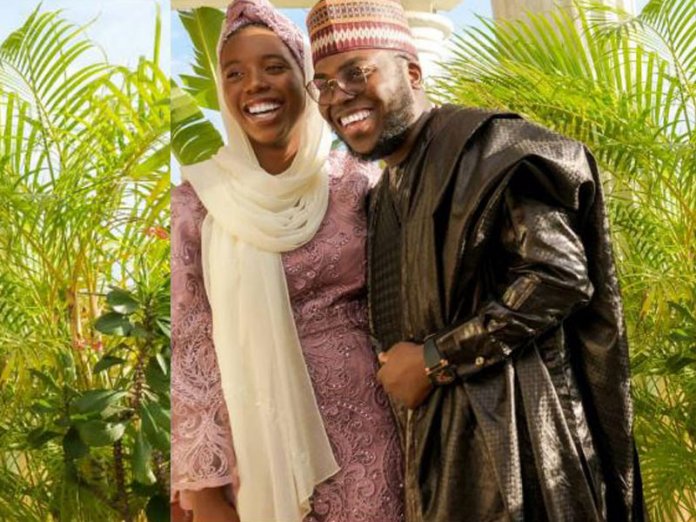 Don’t get it twisted, the Nigerian artiste and music sensation, D’Banj said, love is a beautiful thing. He had it right. Many a man has been known to trek across the fiery Sahara, many a man known to traverse the Atlantic Ocean, all in search of a heartthrob and life partner. Some find this treasure; others are not so lucky. From all indications, Abdul Hamid Ayomide, son of Ogun state darling, Hajia Modele Sarafa-Yusuf, is one of the lucky few.

Did he cross an unforgiving landscape to find his heartthrob? He sure did!
Hamid, the bridegroom, is an IT Systems Administrator with an Investment Bank and a Masters degree holder from the prestigious Royal Holloway, University of London. He is from the indomitable families of the late Alhaji Suleiman Garba-Nuru of Chinade, Bauchi State, and of Hajia Modele Sarafa-Yusuf, a native of Iperu-Remo, Ogun State. The bride, a graduate of Business and Management from Brunel University is from the family of Sheikh Muhammed and Hajia Mariam Mansur-Williams of the Akinsemoyin Royal Family of Lagos.

Nobody can say that this is not an auspicious union of the young couple and their giant family trees. The Akinsemoyin Royal Family is a family of prestige, and is celebrated as the first royal dynasty of Lagos State. Take note that this is the Royal Family that effectively shuts down the city of Lagos when the annual event of Akinsemoyin Day is celebrated: religion, culture and tradition are commemorated in a week-long celebration of the genealogy and dynasty that is reportedly older than the city itself. But that is only the family of the bride.

Abdul Hamid’s mother, Modele Sarafa-Yusuf, is the award-winning media practitioner who has about 33 years of experience in Journalism and Marketing Communications and has remained a pacesetter in the Media. The first woman sportscaster in Africa, former Head of Sponsorships in Globacom Ltd, former Director of Marketing at the American University of Nigeria & Honorary Special Adviser on Information to the Ogun State Governor; Hajia Modele is a quiet achiever and weighty personality while Hamid’s late father, Alhaji Suleiman Garba-Nuru, was an entrepreneur and much loved philanthropist who enjoyed a lot of goodwill during his lifetime.

Needless to say, this union is a promising bond for the two families. According to reports, the wedding is slated to hold at the Landmark Event Centre, Lagos, on the 2nd of February. Pomp and pageantry is expected to accompany this purple matrimony, as men and women of repute emerge en masse to celebrate the couple and felicitate with their families.

To AbdulHamid and Aisha, a most pleasant time to look forward to, in wedding and wedlock.