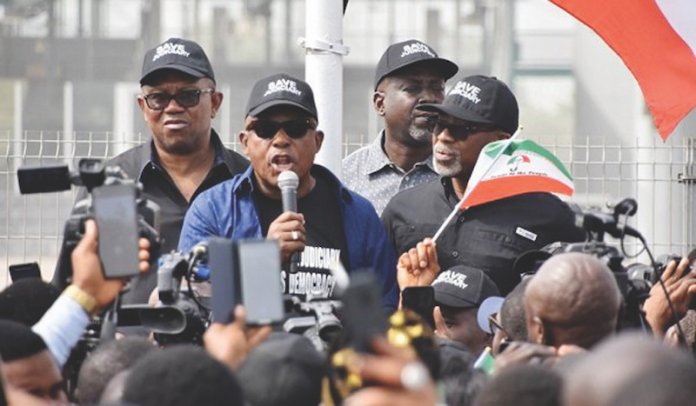 Is it uhuru yet in Imo State? Amby Uneze asks

Since the January 14, 2020 controversial judgment of the Supreme Court, which sacked Chief Emeka Ihedioha of the Peoples Democratic Party (PDP) and installed Senator Hope Uzodinma of the All Progressives Congress (APC) as the Imo State governor, the centre has refused to hold not only in the state, but also throughout the country. There are serious agitations from different spheres of the country as people of diverse opinion and upbringing continue to criticise the justices of the Supreme Court for allegedly dishing out injustice.

The problem or peoples’ concern was not only that the PDP candidate was the victim of the judgment, but the manner in which the justices unmindfully threw caution and merit to the winds and gave “their” own type of ruling, which was alien to the Nigerian legal system.
Granted that the Apex Court is the final arbiter and deemed “infallible” even as it is generally regarded as the last hope of the common man, from the judgment, the same common man the courts are there to protect turned out to be the one being trampled upon with unpopular judgment.

One good thing about the whole issue is that the clamour for a judgment review transcends one political party. Indeed, some members of the very party that is enjoying the judgment are objective enough to find error in the very ruling. No wonder, a majority of Nigerians are protesting and speaking with one voice that the right thing needs to be done.
Ordinarily, court judgments especially, Supreme Court ruling are supposed to be sound and somewhat error-free, but when ruling is found to contain deliberate errors, then, the people would agitate for a review., so to far. It was not only in Imo State that people came out to protest, many parts of the country witnessed massive protests, condemning the apex court’s ruling on Ihedioha versus Uzodinma governorship matter.

Protesters, who were clad in black attires, bore placards with inscriptions like: ‘Reverse the injustice now’; ‘Ihedioha won landslide’ and ‘Tanko must go’, amongst others. They were also singing sorrowful songs to explain their agitations.
Not unexpectedly, the following day, supporters of Hope Uzodinma held their own protest in the state. State deputy chairman of the APC, Ugochukwu Nzekwe, said the supporters were on a solidarity rally to show that the people of the state were happy with Uzodinma as their new governor.
In the same vein, the Concerned Church Leaders Forum, which has as convener, Dr. Cosmas Ilechukwu and co-convener, Bishop Chidi Oparaojiaku, said the general public and indeed Imo residents would like to know how the Supreme Court arrived at the decision, which seems to implant injustice.

Reading from a prepared text, Bishop Oparaojiaku said, “We are deeply worried at what will be the fate of future elections in Nigeria if the courts are allowed to use technicalities to subvert the will of the electorate. Any democracy where the people are made irrelevant in elections cannot be said to be a democracy. The general public and especially Imo people will like to know how the Supreme Court arrived at the decision which implants injustice”. The clerics maintained that the Supreme Court judgment of January 14, 2020, runs counter to the facts on ground and raises a lot of questions.

“It is recognisable that INEC declared accredited votes to be 832,743 but the total votes declared by the Supreme Court run in excess of 127, 209 votes. How come? It is not that Christian leaders hate the newly sworn-in Governor of Imo State, who is undoubtedly an Imo son, but the judgment has raised a lot of unanswered questions. “Where there is therefore any perceived act of injustice, we are morally authorised to speak out and question the modalities for the injustice.”

The statement added: “In view of the above, we join millions of Nigerians to call on the Supreme Court of Nigeria to review that judgment. While calling on the Supreme Court to do so, we urge Imo people and all interest groups to ensure that only the way of peace, maturity and godliness is employed in handling this sensitive matter. We have firm confidence and unflinching faith that the Almighty God, who is the Supreme Judge of all the earth has the final verdict in this matter.”
However, the Anglican Bishop of Enugu, Archbishop Emmanuel Chukwuma, who claimed that he was speaking the minds of other Anglican bishops, described the ruling as “wicked and corrupt.”

According to him, “I am speaking the minds of most of the Bishops of the Anglican Church that we are very much discontented and very much in disagreement with the kangaroo judgment of the Supreme Court on what has happened in Imo State. We sincerely feel disappointed with the Chief Justice of Nigeria, who has not got his facts correct and we feel that the judgment is wicked and corrupt,” he said.
He therefore called for the “immediate resignation of the Chief Justice of Nigeria, Justice Tanko Mohammad,” saying “he is not qualified to head the nation’s judiciary.”

But Reverend Father Charles Osuji of the Catholic Diocese of Okigwe took exception to Archbishop Chukwuma’s comments, insisting that Uzodinma’s emergence was not only divine but one that has shown that there would be light at the end of the tunnel for all Imo indigenes.
In his reaction, a former governorship candidate in the state, Hon. Ike C. Ibe, observed that in seven and half short months, Ihedioha broke away from the past norms.

Not satisfied with the Supreme Court judgment on Imo governorship, Civil Society Organization (CSO), Coalition in Defence of Nigerian Democracy and Constitution (CDNDC) have advised the apex court to apply a judicial doctrine of necessity to review the judgment.
The CSO said judicial doctrine of necessity had become necessary on the judgment following the backlash it had attracted, while the Convener of CDNDC, Ariyo-Dare Atoye in Abuja said the Supreme Court judgment was erroneously premised on 388 polling units results, when indeed only 366 polling units’ results were admitted in the Tribunal before being expunged on very solid grounds by both the Tribunal and the Court of Appeal.

“It is our candid submission that the Supreme Court is left with no other option than to review and reverse this anomaly, even if it means applying a Judicial Doctrine of Necessity (borrowing from the intervention of the National Assembly, when Nigeria was in a big fix)”.
Another group of legal experts under the aegis of Partners for Justice and Equity (PAJE) said the Supreme Court could decide to review the facts of the case with a view of ensuring that justice is not only done, however, seen to have been done.

In a statement issued after their meeting in Abuja on Thursday, PAJE, which is made up senior lawyers, also advised Ihedioha to make a formal approach to the Supreme Court through legal application for the apex court to look at the facts in issue once more.
The statement signed by Uwajiogu Ikeokwu Udemba, National Secretary of the group said, “There are several reasons for the Supreme Court to look at the case involving the March 2019 governorship election in Imo State with a view of ensuring that justice is given to those that deserve it. Because of time, we will only provide seven of the grounds as follows:

“The sum total of votes added by Supreme Court exceeds accredited votes. This is in violation of Section 53 of Electoral Act 2010 (As Amended) and Section 8 (b) of INEC Guideline for 2019 election. The Acceptance of Results from 388 polling units by Supreme Court without certification is a violation of Section 89 (e) and (f) and 90 (c) of the Evidence Act 2011, which requires all public documents to be certified before it can be tendered in evidence.
“The results from the disputed 388 polling units were neither certified by INEC, who are the issuers of the document nor Police in whose custody they claimed the documents emanated.

“The Acceptance of Evidence of a Police Officer, who neither made the document nor knew anything about the document is in violation of Section 37, 38 and 126 of Evidence Act 2011,” the statement said.
Continuing, PAJE said, “The Acceptance of the 388 results by the Supreme without any evidence from polling agents or INEC officials is a clear departure from the existing judicial precedence on the proof of election results as established by Supreme Court in long lines of cases including most recently Atiku vs. Buhari, Alex Otti Vs. Ikpeazu.

“The Supreme Court judgment was erroneously premised on 388 polling units results, when indeed only 366 polling units results were presented to the court. Who knows if the exclusion of the 20 added results could have, if not wipe out the margin, make it impossible for the APC candidate to make spread requirement?” It also pointed out that the Supreme Court should have ordered INEC to conduct election in the said 388 polling units since the margin of registered voters in those polling units are such that could affect the outcome of the election.
Pix: PDP leaders led by its national chairman, Uche Secondus protesting the Supreme Court decision. With him are former governor Peter Obi and Senator Eyinnaya Abaribe.jpg