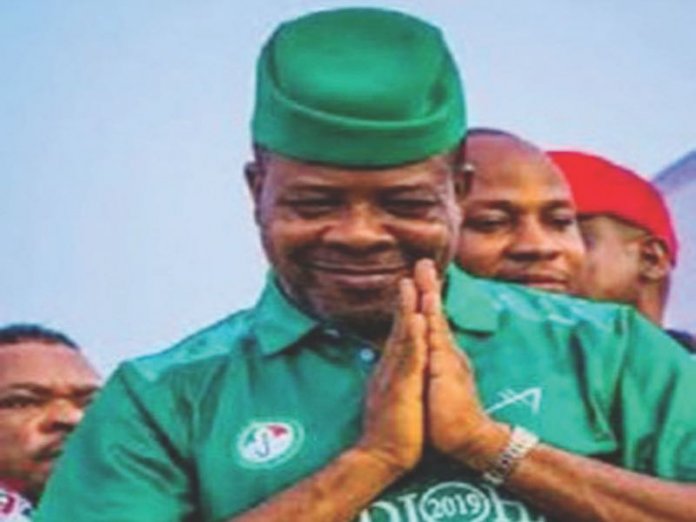 The release of the judgment of the Supreme Court sacking Chief Emeka Ihedioha and replacing him with Hope Uzodinma as the governor of Imo State has given experts the opportunity to properly dissect the decision of the apex court, writes Davidson Iriekpen

Twelve days have passed since the Supreme Court sacked Chief Emeka Ihedioha of the Peoples Democratic Party (PDP) and replaced him with Hope Uzodinma of the All Progressives Congress (APC) as the governor of Imo State. But the controversy trailing the judgment has refused to subside.

Last Monday and Tuesday, not only did the court’s decision spark off huge protests in Abuja and various state capitals in the five South-east states, where members of the PDP, their supporters and some pressure groups trooped into the streets in their large number to demand that the judgment be reversed, but political and legal experts have continued to ask questions, deriding the judgment as a great injustice and a slap on democracy.

What a majority of those protesting and analysing the judgment still cannot understand, is not only how a candidate who came fourth in the governorship election held on March 9, 2019, could be declared winner, this is why virtually everybody, who spoke during the protests alleged that the apex court, as presently constituted under Justice Tanko Ibrahim Muhammad, has become heavily compromised, lost its credibility and is now annexed to execute the agenda of the APC-led federal government against the Nigerian people.
They concluded that the judgment was not only a judicial heist, but also a provocative product of executive manipulation, which should not be allowed to stand.

They were further taken aback that the court would ignore the evidence and testimony of the agency responsible for the conduct of election in the country, INEC, and relied on that of the police.
INEC after the polls had declared Ihedioha winner with the highest number of 273,404 votes. The three other candidates coming behind him were credited as follows: Uche Nwosu (AA) 190,364, Ifeanyi Araraume (APGA) 114,676 and Hope Uzodinma (APC) 96,458.

But the Supreme Court in its unanimous judgment upturned the victory and held that the concurrent judgments of the lower courts, which had upheld the election, erred in law when they excluded votes totalling 213,295 from 388 polling units from the total scores at the election, raising questions such as: Does the Supreme Court have powers to formulate and allocate votes as election results?

Is the Supreme Court saying that all the votes from the alleged 388 polling units were for the APC alone in an election that was contested by over 70 candidates? Does the Nigerian Police have no powers to organise elections in Nigeria? Can the results tendered by a police officer be admitted in any court as exhibit, when he is not INEC officer?

Pundits wondered if there was any law that permits the Supreme Court or anyone else to unilaterally increase the total accredited votes by any margin after the accreditation and or the election? They want know where the apex court got the numbers to declare Uzodinma/APC from a paltry 96,456 votes over Ihedioha/PDP votes of 276,404.

They also pointed out that the victory of Ihedioha/PDP was confirmed by two concurrent judgments of both the tribunal and the Court of Appeal and that the tradition is that the Supreme Court hardly tampers with such decisions except it was found to be perverse. “What was the evidence of perversity?” One of the analysts asked.

Attention was also drawn to other elections conducted by INEC same date – the governorship and House of Assembly – with only one accreditation for the two elections and the APC did not win any of the 27 seats in the House of Assembly which were won as follows: PDP won 13; AA won 8; APGA won six; APC won 0: Total 27.

This again has reaffirmed the salient question, how then did the Supreme Court arrive at its decision to allocate results to void a lawful governorship election and impose an unelected person as governor?
Those who spoke with THISDAY wondered how the Supreme Court, which annulled Ihedioha’s victory, in a number of cases, the latest and most celebrated being Atiku v Buhari & Ors, consistently decided that for a petitioner to succeed in an allegation of infraction of any provision of the Electoral Act, especially one complaining about malpractice, as in this case, wrongful exclusion of votes, the petitioner must call witnesses polling unit by polling unit.

Therefore, how many witnesses did Uzodinma/APC call from the 388 polling units from where the Supreme Court allocated votes to him?
They further contended that the results from the 388 polling units were rightfully rejected, in line with several decisions of the Supreme Court, by the tribunal and Court of Appeal as it was merely dumped on the tribunal in a Ghana Must Go bag, by a policeman who had no mandate of the police to testify at the tribunal.

They added that the tribunal did not even open the Ghana Must Go bags, as there was no basis to do so, wondering how the Supreme Court opened the bag, counted the results and added them to only the APC candidate.
What is more perplexing to them is the fact that INEC, whose duty it is to conduct election, produced a schedule of reasons why results were not produced from the 388 polling units but was ignored.

“None of the candidates or their counsel, except perhaps APC, is aware of the number of votes scored by each party from the 388 polling units. The tribunal or Court of Appeal did not mention or ascribe any figure from the units to any party in their decisions.
“In fact, in the cross-examination of the APC candidate, Uzodinma, he could not read any figure from the results. He said that the figures were not clear. And so it beats our imagination where the Supreme Court conjured and manufactured the figures it used in declaring Uzodinma/APC as duly elected,” revealed Sam Avuru.

He referred to case of Buhari v. INEC (2008), where the apex court decided that, “Weight can hardly be attached to a document tendered in evidence by a witness, who cannot or is not in a position to answer questions on the document. One of such persons the law identifies is the one who did not make the document. Such a person is adjudged in the eyes of the law as ignorant of the content of the document.”

It was argued further that if from the Certified True Copy of the evidence/testimony of PW54, which the court relied upon to give its final judgment, there is no evidence of the votes scored in Exhibits PPP1 to PPP366, or PPP1 to 368 or 388, where did it get the 213,695 votes it added to the scores of Uzodinma? And from where did the it get the evidence that results from 388 polling units were excluded when PW54 testified that he brought only 366 or 368 Forms EC8As?
Since DCP Rabiu Hussaini (PW54), tendered forms 366 and not 388, where did the apex court get the 213,695 votes it added to Uzodinma? Or did it merely copy the pleadings of Uzodinma and regarded it as evidence? It is trite in law that averment in pleadings or address of counsel cannot take the place of evidence.

From the 20 or 22 EC8As forms PW54 admitted that he omitted to tender at the tribunal from the 388 he was subpoenered to produce, how many votes did it contain for each candidate? What is the spread? These are questions the court must answer, since their judgment did not cover these issues but contained unbelievable gaps.
It is their view that the court relied only on the submission of Uzodinma without any reference to the records of proceedings of the tribunal/Court of Appeal or otherwise, it would have realised that even though Uzodinma claimed 388 polling units, he only dumped 366 discredited polling units results through the police, yet, the court unilaterally credited him with figures from the 388 units, which did not remove the 20 or even 22 polling units that were in fact not tendered before the tribunal.

They concluded that the court judgment was erroneously premised on the results of the 388 polling units, when indeed only 366 polling units’ results were admitted in the tribunal before being expunged on very solid grounds by both the tribunal and the Court of Appeal.
Many have also argued that Uzodinma was never the candidate of APC and was not a candidate of any party in the March 9 governorship election in Imo State based on the judgment of the same Supreme Court on December 20, 2019. They said Uche Nwosu was declared as the rightful candidate of APC and AA and that the APC couldn’t have produced two candidates in one election.
Based on the salient facts, which were ignored when the judgment was delivered, Ihedioha and PDP have been inundated with pressure to apply for a review of the case. While many think it would be a tall request, others feel otherwise.

While those who feel it is an impossible mission based their decisions on the recent judgment of the court, others referred to the decision of the late Justice Chukwudifu Oputa, also known as the Socrates of the apex court, who while delivering the lead judgment in Adegoke Motors Ltd. v. Adesanya (1989) 13 NWLR (Pt.109) 250 at page 275A, thus: “We are final not because we are infallible, rather, we are infallible, because we are final. Justices of this court are humanbeings, capable of erring. It will certainly be shortsighted arrogance not to accept this obvious truth. It is also true that this court can do inestimable good through its wise decisions.

“Similarly, the court can do incalculable harm through its mistakes. When therefore it appears to learned counsel that any decision of this court has been given per incuriam, such counsel should have the boldness and courage to ask that such a decision be over-ruled. This court has the power to overrule itself (and has done so in the past) for it gladly accepts that it is far better to admit an error than to persevere in error.”