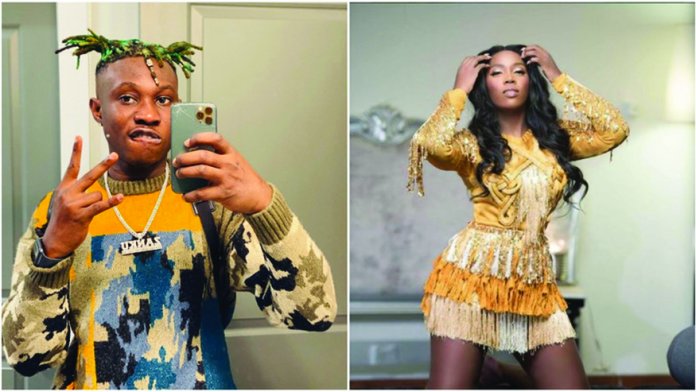 Popular hip-hop artiste, Omoniyi Temidayo Raphael, better known as Zlatan Ibile was in red hot form last Sunday night at his “Zanku to The World Concert” held at the New African Shrine, Lagos. He performed his first single for the year – Quilox – as fans and lovers of the music star almost squawked down the roof. One of the highlights of the night was the surprise performance by Tiwa Savage.

Zlatan brought the self-acclaimed Number One African Bad Girl on stage for a joint performance. They both performed their hit single “Shotan” to the admiration of the crowd.

It was all fun and excitement as the singers jointly thrilled their fans. But before her performance, Tiwa took a tour of the legendary Shrine, looking simple and cute in a black gown and rocking her chic haircut.

The 39-year-old singer and mum of one gave an electrifying performance alongside Zlatan.

A number of artistes showed up to support Zlatan on the night. Zlatan later took to his Instagram page where he announced that the show was sold out.

He went on to thank all his fans for their support. “Sold Out Again. Another tremendous way to begin the year, thanks to my supporters and team for always making this a magic. #ZTTW,” he wrote.

On January 1, Zlatan announced the kickoff of his record label, Zanku Records, on his social media handles. On Twitter, he shared the news with the label’s logo and the caption: “I’m a different breed, say hello to CEO of Zanku Records”.

He went on to write, “I have the best fans on earth,” he wrote on Instagram. Continuing, he said: “The love at the #ZankuLive was amazing! It was totally Zankufied and in appreciation, I want to give another experience to my people on the Mainland. Get ready to experience the night of your lives at the ‘Zanku to the world concert’ – Mainland Invasion!  January 19, at the New African Shrine.”  Indeed, the January 19 show was great.

Zlatan is popularly known for his Zanku dance steps which have been the most trending dance in the country since last year. And the logo of his new record label clearly portrays the dance.

The Nigerian singer, songwriter and dancer, had gained  exposure following his collaboration with Chinko Ekun  and Lil Kesh on the 2018 hit single “Able God”.

Shortly afterwards, he dropped “Zanku”, a song that was accompanied by a dance routine of the same name. In November 2019, he released his debut studio album Zanku, an acronym for Zlatan Abeg No Kills Us.

The music star’s first concert in Lagos, titled, ‘Zlatan Live’ was held at Federal Palace Hotel, Lagos on December 19, 2019. Some of the upcoming acts who performed before Zlatan were Blaqbonez, CKay, Picazo Rhap, Yomi Blaize and so forth. Big names who performed were Naira Marley, Peruzzi, Mayorkun, Styl Plus, Yonda, Dremo, Lyta, CDQ, MOJO and Bella Shmurda.