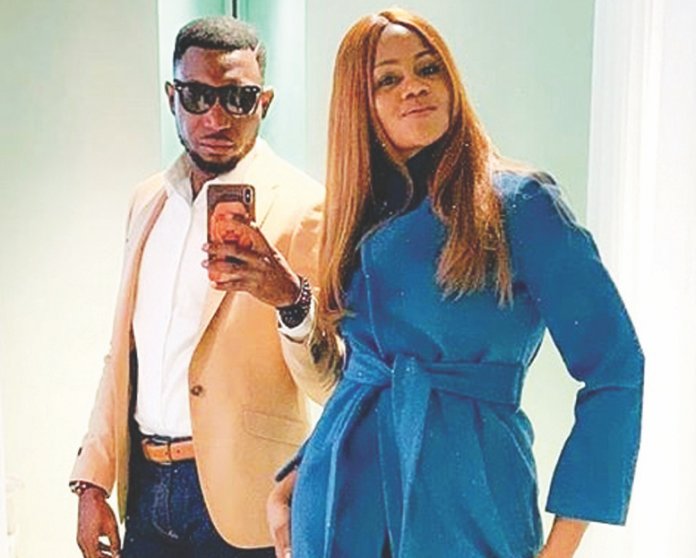 It was a special day for popular Nigerian singer Timi Dakolo on Monday January 20, 2020 as he marked his birthday. The award winning singer who clocked 39 is appreciative of life. To mark the special day with him, his wife Busola took to social media to celebrate her husband and wish him a happy birthday. For the birthday wish, the celebrity photographer took to Instagram to shower the father of her children with sweet loving words.

Busola Dakolo described the soul singer as her jewel of inestimable value. While sharing a studio photo of her husband in her post, the beautiful wife and mother of three wrote: “Happy birthday to my ride or die @timidakolo. My jewel of inestimable value. #worldTimiDay.” In his own post, to celebrate his special day, the inspirational musician acknowledged being grateful for a lot in life.

Dakolo, in his caption, explained all the beautiful things he would be doing in 2020 and promised to be crazily creative with his music and “will make sure to laugh a lot in the New Year.” He wrote: “Happy birthday to me. I will laugh a lot this year. So if you see laughing hard just remember I said so. I would sing my best songs yet. I would travel a lot. I would know God more. I would be creatively crazy. I would make me proud.”

Busola, who tied the knots with her sweetheart, Timi in 2012 has had the best of marriage. For followers and fans of the couple, this will not come as a surprise as the Dakolos have often depicted a beauty in what Nigerian families and marriage values should depict.

In more ways than one, Timi also showed a different side to Nigerian men as he stood by his wife during the viral rape saga with COZA pastor, Biodun Fatoyinbo.

The ‘Iyawo Mi’ crooner spent the past year fighting for justice on behalf of his wife, Busola. On his career side, it would be recalled that Timi emerged winner of the inaugural season of Idols West Africa in 2007. Soon after winning the singing reality TV show, Timi hugged limelight. Accompanying his victory was a recording contract with Sony BMG, in addition to other prizes.

Last year, barely weeks after signing a record deal with UK based Virgin EMI Records, a subsidiary of the prestigious Universal Music Group in November, his new album of the deal was featured on the BBC Radio 2 playlist for the month of December, which also featured holiday/Christmas songs from other top music stars. The singer was acknowledged for his recent holiday theme album, “Merry Christmas, Darling,” which has award winning British singer/songwriter, Emeli Sande as guest artiste.

“Merry Christmas, Darling” is an impressive eleven tracks record featuring collaborations with prominent artistes from different regions of the world including Eric Benet, Kenny G, Laura Bretan and The Eben Voices of Gabon Choir. Timi Dakolo was also recently interviewed in The Times, a UK newspaper for his Merry Christmas Darling album. The singer recently shared the album titled track accompanied with the visuals. Every fan of the soul singer recognises him as a top talent in the music industry.

The singing star has proved to be a bundle of talent, hard work and consistency. Timi Dakolo released his first single comprising three songs in October 2009. In 2011, he released the song There’s a Cry.

From releasing the Beautiful Noise album in 2011 and having popular songs like Iyawo Mi, The Vow and Wish Me Well, he went on to become a judge on The Voice Nigeria singing competition, where he took on the challenge to mentor Idyl – the 2017 winner.