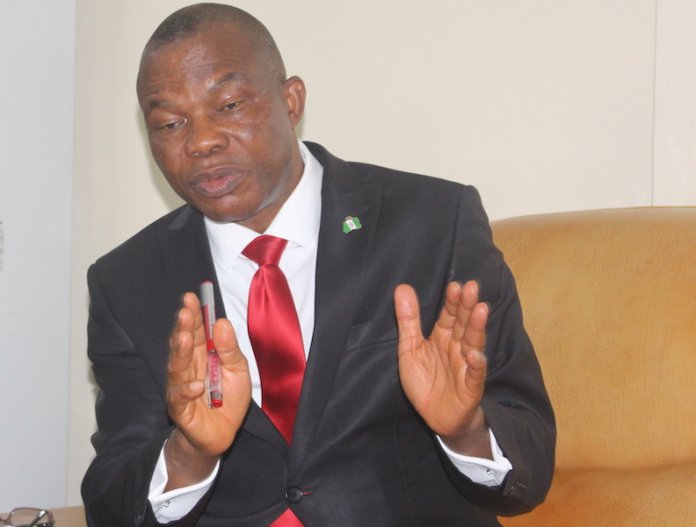 All is not well at the Michael Okpara University of Agriculture, Umudike in recent times as the Vice- Chancellor, Professor Francis Otunta faces accusation of sexual harassment which has led to a libel suit against his alleged crony, Dr. Philip Nto by a female lecturer. Ambrose Nneji reports

The trending issue of sex-for-marks in tertiary institutions may not be targeted at students only, but it also might be extended to the management and staff of such institutions, possibly for unmerited rewards and favours. This act may not have been uncovered in the past, even though there may be a growing concern among the disciplined ones in the system, but they could not summon the courage to pour out their vituperation against the cankerworm.

But when a courageous, disciplined and virtuous personality decides to blow the whistle to the attention of the world, such person should be commended instead of name calling and castigation by those who might be benefiting from the amorous behavior. Whatever be the case, the issue of sexual harassment in any clime is an offence and should not be treated with levity.

When a women, especially one who has risen to the position of a professor in a university cries out to the world that she was severally harassed by a university vice-chancellor, such allegation should not be swept under the carpet. Therefore, the Ministry of Education should take it upon itself as a priority to investigate the matter to determine to authenticity of the allegation, before the trend takes over higher institutions in the country.

Professor Patricia Mbah’s claim that her present ordeal in the hands of her university’s Vice- Chancellor, Professor Francis Otunta, which made the VC to stop her salary for several months, demote her to associate professor and other manners of maltreatment in the university were because she refused the VC’s request for sex is a serious one. She also stated that the matter was reported to the relevant authorities but nothing tangible was heard.

The allegation against the vice- chancellor by Mbah, a former head of department in the university, prompted a third party, the Provost of Abia State College of Education, Arochukwu, Dr. Philip Nto, who until his recent appointment, was a lecturer at the College of Applied Food Sciences and Tourism in the Department of AgriBusiness and Management of MOUAU to allegedly write a piece against Mbah, which she considered libelous. Nto is currently on secondment.

In her letter to some bodies, including the university Governing Council, Ministry of Education, Independent Corrupt Practices Commission (ICPC), among others, Mbah said the vice- chancellor stopped her salary since April 2019 because she refused to yield to his sexual advances and had made good his threats of making her stay in the university hell if she continues to reject his advances by stopping her salaries.

The Professor of Home Economics stated that it all started shortly after Otunta was made the vice-chancellor, having served as one of the panelists that interviewed and certified him as being qualified. “Upon assumption of office, Otunta proposed my name as the Deputy Vice- Chancellor and when that could not work out, he approached me and requested that we become lovers, a request I politely turned down and told him that I am a married woman, a grandmother and devoted Christian.
“I had expected a man of that status to respect my decision having politely rejected his amorous advances, but he had gone ahead to intimidate, harass and afflict me with all manners of wickedness and at various times, had tried to force me into sleeping with him.

“On one occasion, Otunta invited me to his office pulled down his trousers and tried to force himself on me right inside the office, I resisted and push him down, opened the door and ran away.
“A similar incident also happened when I came back from the hospital after my treatment and discovered that my salary had been stopped despite obtaining all the necessary approvals from my HOD and other relevant authorities with documentary evidence to be away on medical vacation when I came back, I was told that the VC had ordered that my salary be stopped,” she alleged.

In a statement of claim filed at the High Court of Abia State, holden at Umuahia dated 13/01/2020, solicitor to Professor Mbah, Chief Sam Nwadighoha is claiming N500 million as special and general damages on the footing of aggravated or exemplary damages against Nto.
The basis of the claim is anchored on the article titled: ‘Patricia Mbah: Tales from a Drowning Woman’ suspected to have been written by Nto in defence of his boss, Otunta.

Parts of the alleged write-up read: “Facts are sacred. Comments are free. Propaganda has a short life span. Lies soon evaporate. But truth is immutable. Like pregnancy it can never be hidden. And it is only truth that heals the conscience. But because the conscience of Dr. (Mrs.) Patricia Mbah (sic) of Home Economics Department, Michael Okpara University of Agriculture, Umudike is dead, she no longer can decipher between truth and lies or even between right and wrong.

“If she had any modicum of conscience, she would not have resorted to authorising the defamatory statement against the Vice-Chancellor of MOUAU, Prof Francis Otunta. If Patricia had shame left, given the ignominious role she and her lover and partner-in-crime Prof Hilary Edeoga played at MOUAU, she would have long resigned from the university.

“But because she is benefit of shame; because she has lost respect even among her colleagues in the Department, Patricia Mbah wants to re-invent her sagging image by falsely accusing Prof Otunta of sexually harassing her. Since she claimed to be an internationally recognised scholar, I wonder why she didn’t raise a petition to the minister of education, accompanied by solid evidence, against Prof Otunta instead of resorting to media trial and character assassination.

“But because Patricia Mbah, a serial liar, adulteress and certified criminal, has no evidence of sexual harassment, she went berserk on social media with the sole agenda of assassinating the character of a first class scholar and astute administrator. Her game plan back-fired, hence her crocodile tears of lamenting the stoppage of her salary and demotion to associate professor.

“As a high-ranking member of the Edeoga’s gang that raped MOUAU to a state of coma, Patricia Mbah had dreamt of continuity with Prof Otunta as their puppet. When Edeoga attempted to foist her as Deputy Vice Chancellor under Otunta, and her stunted academic records and blemished character sold her short, Prof Otunta naturally became a victim, when her incompetence could not earn her the respect of even a cleaner in her department and they revolted against her, Prof Otunta became the scape goat. And when almost the entire university rose against the ‘cHINA PROFESSORS’ and the governing council approved their demotion, who else to blame but Prof Otunta?”
The claimant (Mbah) avers that she swallowed hard in the face of injustices meted to her, but when it became unbearable, she had to write to the Chairman of the university Governing Council concerning her ordeal, unmerited punishments and continuous witch-hunting by the vice-chancellor and the Chairman of the Board who is said to be in the favour of the vice- chancellor, refused to take any action against the VC or even protect her possibly to shield the image of the institution from such scandal.

She claimed that when her ordeal persisted unabated, she took the bold step to write petitions to several bodies and non- governmental organisations such as the Ministry of Education, Ministry of Agriculture, Ministry of Women Affairs, ICPC, National Council of Women Societies, Federation of International Women Lawyers (FIDA) not neglecting writing to the Minister of Education, who invited her, the vice- chancellor and the Chairman, Governing Council to Abuja recently and equally berated the duo before her as to the extent of the laxity and lukewarm attitude of the chairman of the board in treating such issues she raised with such levity.
The claimant said she is now looked down on, avoided by people of all walks of life, friends and foes alike and currently the talk of national and international communities to which she belongs in opprobrium and contempt.

She claimed that she has been nationally, and internationally certified, accredited and awarded several honours and recognitions respectively, some of which include: By Ben University of Applied Science Switzerland in 2015; Appointed as ETTC Chairperson as a Professor by MOUAU in 2015; served as a member of National Universities Commission ad hoc Accreditation Panel in 2016, 2017 and 2018; won several awards for MOUAU as the Best Exhibitor in 2014; Best Innovation-tech in 2014, and the Best University with High Content in 2014.

When contacted on telephone, Nto said he had not received any court notice regarding the matter, but noted that if such notice reaches him, his lawyers would respond accordingly. However, all efforts to reach the vice-chancellor proved abortive as his phone line did not connect.

Also the former Vice- Chancellor Professor Hilary Odo Edeoga told THISDAY on phone that Otunta was making sure he drags his name to the mud, but denied ever travelling out of the country, including Dubai since he handed over to Otunta as his successor. He, said he felt insulted as his administration was described as unsuccessful, but noted that time shall judge between him and Otunta at the expiration of Otunta’s tenure.