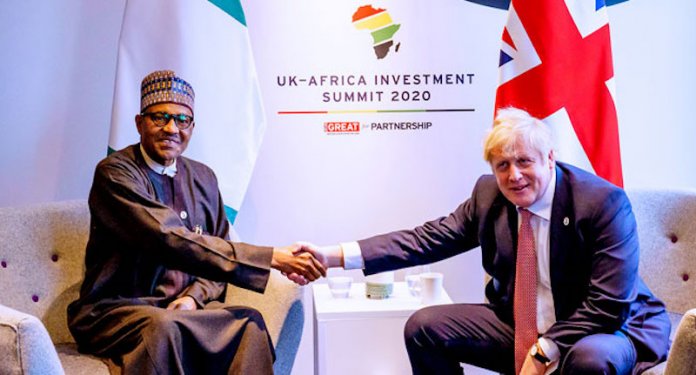 President Muhammadu Buhari yesterday briefed British Prime Minister, Mr. Boris Johnson, on efforts he and his team have made to develop Nigeria since 2015 when he assumed office.

The president, at a meeting with Johnson in London on the sidelines of the one-day United Kingdom-Africa Summit, told the premier how strides in agriculture has made Nigeria almost self-sufficient in rice and other grains, saving the country billions in foreign exchange.

A statement by presidential spokesman, Mr. Femi Adesina, said Buhari also spoke on the war against insurgency, informing Johnson that things were a lot better, more so with the minds of Nigerians assuaged of wrong perception of the true philosophy of Boko Haram.

Buhari identified the main challenge from the insurgency as resettling displaced people, which he said was being addressed head on, adding that “we have a long history with the British military and we are collaborating.”

Buhari also spoke on the anti-corruption war of his government, which the administration is winning despite some challenges.
He sought the cooperation of the National Crime Agency of the United Kingdom, especially in the area of the investigation of fugitives from Nigeria who find refuge in the United Kingdom.

The president also spoke on climate change, describing it as a challenge to Nigeria and neighbouring African countries, notably “with the shrinkage of the Lake Chad to a minuscule of its original size.”

In addition, he told the British prime minister that Nigeria was focused and making progress on education, particularly that of the girl-child.
In his response, Johnson urged Buhari to ensure that he keeps “the national autonomy” of Nigeria intact, predicting that Nigeria will not only be a continental force but also an international power.

He promised to support the anti-graft war through the National Crime Agency and thanked Buhari for being a regional leader whom he said strongly encouraged the West.

He also congratulated him on job creation in agricultural sector, while advising him to do more.
“The British PM pledged to cooperate with Nigeria and other African countries in the inter-basin water transfer, which could solve the Lake Chad problem and enhance security in the sub-region,” the statement said.

Besides, Johnson praised the Commonwealth Free Trade Area initiative, pledging a careful consideration of the plan and commended Buhari “for what he calls the ‘social and economic benefits’ that have accrued to the country since he emerged.”