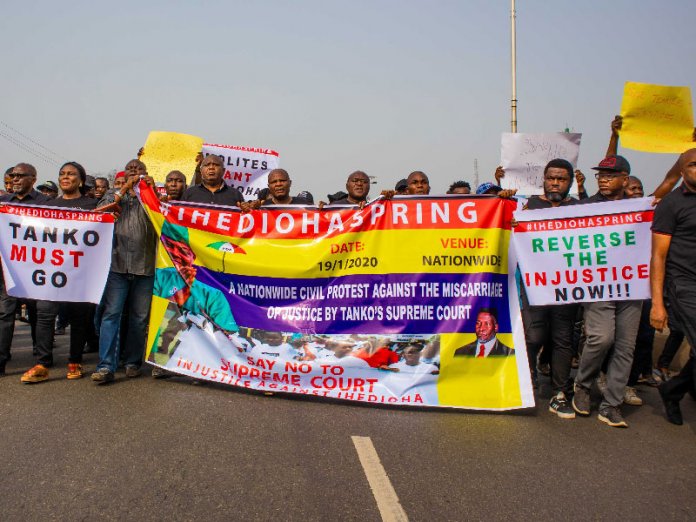 Thousands of protesters thronged the streets of Owerri, the Imo State capital on Sunday to peacefully send warning signals against what they termed injustice against Chief Emeka Ihedioha, who was removed from office as governor of the state by the Supreme Court.

The protest against the judgement was called by the people of the state, including that the Peoples Democratic Party (PDP), who were obviously injured by the outcome of the Apex Court’s verdict.

Protesters, who wore black attires, carried placards with various inscriptions such as ‘Reverse the injustice now’; ‘Ihedioha won landslide’; Tanko must go’, amongst others.

They were also singing sorrowful songs to explain their agitations.

The protest shut down the state capital for hours while security forces were on ground with over 15 truck loads of policemen accompanying the protesters to forestall breakdown of law and order.

Speaking to journalists, one of the protesters and immediate past chief of staff in the government house, Chief Chris Okewulonu said the people of the state were in shock to hear the Supreme Court remove Emeka Ihedioha as the governor of the state, after he won decisively during the March 2019 governorship election.

“We were all in shock when on the 14th of January, the Supreme Court reversed the judgement and awarded victory to APC candidate.

“We discovered that initially, that the Supreme Court did not devote much time to hear the matter. We deduced that there were some funny movement. Our fears were confirmed when on the day of judgement, the Supreme Court went on break and resumed about 4 pm.

“The judgement was not in consonant with the arguments in court and the judgement did not reflect the election that took place in Imo State on March 9 last year. We are all Imo people and participated in the election and noticed that Ihedioha clearly won the election”, Okewulonu said.

He described the judgement as highly compromising, adding that the people of the state decided to embark on the protest because they did not want to resort to violence.

The protesters therefore called on the Apex Court to reverse the judgement on the grounds that it had made a mistake.

“The Supreme Court must reverse the judgement. It has happened in the past. They should quickly reconvene and do justice. There are a number of instances where the Supreme Court realized it made a mistake and reconvened to do justice to the matter. The most important thing is the interest of the people of the state”, he said.