YOU are welcome to this edition of our weekly language tonic: “Akinjide, others lash Ibadan elders” (THE NATION Headline, December 22) The elders were not flogged, but cautioned hence lash out (at somebody/something—with words/blows)

“Music stars of yesteryears” (Source: as above) ‘Yesteryear’, just like ‘heyday’, is uncountable.

“The privileged invitees, who showed up to rejoice with this well-connected individual….” Social scene: privileged guests (not invitees), which is a warped Nigerian creation.

“Police arrest 51 over post-election violence” Replace ‘over’ with ‘for’.

“It is antithetical to democracy for the minority to have its say and wants to have its way.” (Source: as above) The minority cannot have their (not its) say.

“…to that extent shall we congratulate its authors for (on or upon) hearing the deafening cry of Nigerians for an affective legislature.”

“…were simultaneously a continuation of the power-bloc struggle in Nigeria and unanticipated fallouts from that struggle.”  ‘Fallout’ is uncountable.

“AU has always been a helpless on-looker as other do-gooders from Europe and America flock to these troubled (trouble) spots with relief materials.…”

“The reduction in the number of road accidents and casualities….”  “This way: casualties.

“Why fight, especially since we all are groping in the dark.”  A poser: can we grope where there is light? So, why not just groping?

“…ask questions or demand for their credentials.” Delete ‘for’ from the extract.

“…never mind that ‘saboteurs’ have since done their worst by returning Nigeria back to darkness.” Yank out  ‘back’ in the interest of morphological sanity.

“The readiness of the President and his vice to acquiesce to (in) Senate’s decision.…”

“The time when one ethnic group and the multi-ethnic political prostitutes and the favoured can walk roughshod over the rest of the country have (has) gone forever.”

“Security reports indicated that the strategy of vicious robbery operations are (is) hatched at the chambers of hotels.”

“Specifically, the crisis in the community bothers (borders) on the refusal of majority (a majority) of the people….” (THE GUARDIAN, December 27)

“The committee has since submitted its report, while the public awaits the government’s white paper on it.”  Education: simply the white paper.

The next four improprieties are from VANGUARD of December 27: “As a result (a comma) Nigeria’s role in (on) the continent has been a critical one.”

“Instead we saw belated efforts when the chicken has (had) come home to roost.”

“Someday when the history of Nigeria, with regards (regard) to its bureaucracy….”

“Dignitaries at (on) the occasion included….”

“For that, you need an experienced sailor, not an oars man with an ‘L’ plate number.” From the master: number-plate

“So we now gathered in my house at (on) Victoria Island….”

“Western delegates have stabbed us at (in) the back.”

“You better (had better) come to Jos, Plateau State”

The next five faulty lines are from THISDAY of December 27: “Most observers are agreed that the national question has become more aggravated under the present regime.  ‘More aggravated’ sounds illiterate. ‘Aggravation’ means to make worse.

“That calm has returned to the troubled spot is superficial…” When the bell tolls: trouble spot.

“The tendency in most of the analysis is…” Singular, analysis, plural: analyses.

“I cannot handover (hand over) All Progressives Congress (APC) to INEC….”

‘…the combatants are expected to sheath their swords and fall into line.” (THE GUARDIAN ON SUNDAY, January 12) Noun: sheath; verb: sheathe.

“They equally advocated for a national conference….” Delete ‘for’ in the interest of lexical orderliness.

“Unions, others commend FG over payment of NITEL workers’ entitlements” (National News Bold Headline, November 25) ‘Commend’ takes ‘for’ (not ‘over’).

Wrong: “Give me meat”; Right: Give me some meat

Wrong: “You know Chidi now”; Right: You should know Chidi.

WITH the plethora of faux pas by users of English language, can you through your column inform readers that a dictionary is not the sole authority on usage of words. Can the curfew in Kaduna be from “6 in the morning to 6 in the evening” as repeatedly read on Radio Nigeria? Is this not another goof? (Tony Ike Okoh/08097872801/PH) Yes. 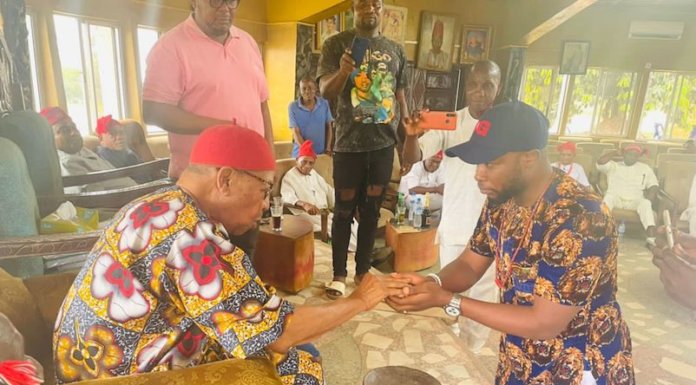