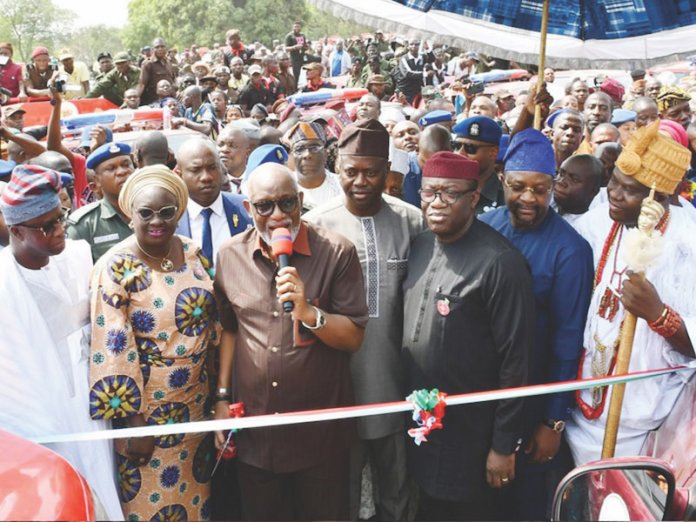 Apparently reacting to the South-west security outfit, code-named Amotekun, launched last week, the National Security Council presided over by President Muhammadu Buhari rose from a meeting at the State House, Abuja, yesterday, with an appeal to states, local governments and other stakeholders to join hands with it and avoid creating separate security platforms for citizens’ protection.

Speaking with journalists at the end of the meeting, the Chief of Air Staff, Air Marshall Abubakar Sadique, who was clearly alluding to Amotekun, said creation of separate security outfits in the country might run contrary to both the national security policy as well as the proposed community policing already approved by the federal government.

“I think our appeal is for all Nigerians and other stakeholders to join hands with the Armed Forces of Nigeria and other security and intelligence agencies to ensure that our country is secured rather than looking at other methods that are likely going to negate the national policy and community policing policy that the federal government has approved.

“What we expect is for all stakeholders, local governments, state governments, other stakeholders to join hands with us. Let us work together to ensure that our country is secured,” he said.

Sadique who said the meeting was called to review the activities of security agencies in the country and also to examine security situations in the North-west and other parts of the country, claimed that the meeting found the level of progress made so far to be satisfactory.

According to him, some of the military equipment for which orders had earlier been made have started arriving Nigeria, promising that more will arrive the country at the end of February.

While attempting to convince Nigerians to have faith in the ability of the federal security operatives, the Air Force boss listed the military equipment which had arrived the country to include two helicopter gunships.

Emphasising that more deliveries will be made at the end of February, he added that the Nigeria Police Force had also been acquiring equipment to fight insecurity, assuring that community policing, which had also been approved by the president, would be well funded with a view to ensuring that security of Nigerians is guaranteed.

He said: “We also looked at the emerging situations in some of our areas particularly acts of banditry in some of the North-western states and other parts of the country and we have critically looked at everything and we are satisfied with the progress we are making.

“We are satisfied with the support the federal government is giving the armed forces and other security agencies in terms of procurement of platforms. Substantial number of these equipment are expected by the end of February. Some of the equipment we are acquiring have started arriving for the Nigerian Air Force. Two helicopter gunships have arrived on the 15th of January and we are now in the process of putting them together which will add to whatever we have.

“We are equally expecting other equipment, like I said, that are meant for the Armed Forces of Nigeria, which we are hoping to get by the end of February. I am sure you are also familiar with the equipment acquisition by the Nigerian Police Force.

“I am sure you are also aware of the policy on community policing that was approved by Mr. President and it is going to be funded. The whole idea is to ensure that Nigeria is secured and Nigerians can go about pursuing their legitimate aspirations without any hindrance.”

He assured Nigerians that both the armed forces and other security agencies in the country would work assiduously to ensure that Nigeria is secured, pointing out that security operatives would also strive hard to ensure that the country’s sovereignty and its territorial integrity are not undermined.

The Air Force chief also promised that with the current delivery of a new set of equipment, there will be closer security monitoring adding that challenges hitherto faced on war fronts by troops would be largely curtailed.

Sadique also said all hands were on deck to end terrorist activities by Boko Haram in no distant time with the cooperation of neighbouring countries with Nigeria.

“I think basically that is what this meeting is all about and what we want to do here is to reassure Nigerians that the Armed Forces of Nigeria and indeed security and intelligence agencies in Nigeria are going to continue to work round the clock to ensure that our country is secured and to ensure that nobody undermines the territorial integrity and national sovereignty of Nigeria.

“We are going to keep a very close watch on what is going on and with the equipment that we are getting, definitely, the challenges we are facing in some of the theatres of operation particularly the North-east will be addressed adequately.

“We are doing everything with the other sister countries in the Lake Chad Basin working together to ensure that the Boko Haram terrorism is brought substantially to an end as quickly as possible,” he submitted.