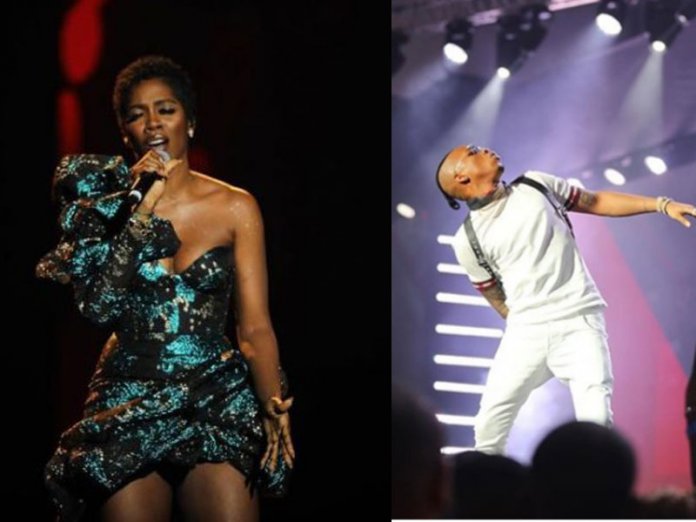 Tajuddeen Adepetu is a showbiz man even if his modest looks barely betray his penchant for glitz and glamour. However, his works speak volumes for his ingenuity. For instance, the X100 festival last yuletide season which he spearheaded was a spectacular display of artistic beauty. From the stage to the seating arrangement, Adepetu knows how to put together a world class show. The same was recently seen in the fourth edition of the Soundcity MVP Awards, a music show that is named after his music channel Soundcity and celebrates the creativity and excellence of music stars across the continent.

For three days, Adepetu and his crew camped at Eko Hotels and Suites, setting the stage for the grandest musical event in Nigeria that will set the tone for another musical year.

Artisans could be seen hammering on woods or carrying artworks throughout the period, ensuring that every detail was done with precision. The ad-hoc staff donning customised t-shirts of the awards were also on ground to assist with logistics.

The outcome of their labour was a continuum of grandeur and splendor. Take for instance, the hallway leading to the Convention Centre where the show was held. It was carpeted from beginning to end while the walls were adorned with messages that convey the reputation of the award as well as advertorial display from sponsors of the event. Inside, the glitziness was in full display. The stage covered the breadth of the hall such that every guest had a better view of the performances. About 12 screens were used as the backdrop, including the entry and exit way. The screens were often times used to display nominees and other promotional messages.

Most award shows often turn out rowdy due to poor crowd control but not with Soundcity MVP Awards. There were bold signs at the venue indicating direction and ticket exchange for the various tiers. The ushers were also on ground to guide guests and announcements were made at intervals for further guidance.

Though punctuality is not a strong trait of most award shows, Adepetu and his team found a way to keep the teeming crowd entertained. The red carpet was transformed to a pre-show performance before the main event. Situated at the poolside, up and coming artistes entertained the guests with their music while they posed for the cameras.

The guests were later ushered into the main hall where Shoddy the Hypeman and DJ Neptune warmed them up with good music.

At exactly 00:40 am, the show finally kicked off with some dance and music performances, almost three hours behind the scheduled time. In quick succession, music artistes like the Ugandan rave of the moment Big Tril, Nigerian JoeBoy, Skibii performed. Their set did not go beyond two songs. The main awards ceremony kicked off at 01:18 with South African host Bonang Matheba welcoming the guests.

Without much ado, the first award of the night Viewer’s Choice was presented to Naira Marley. It was the only award he won for the night as the ‘boys’ dominated the awards.

Burna Boy who scooped the most awards at last year’s show maintained his winning streak at this year’s event. He retained the coveted title of African Artiste of the Year while clinching the Best Male MVP in the continent. Last year, he took home the trophy for Song of the Year for his song ‘Ye’. This year, the winning song for him was his collaboration with Zlatan ‘Killin Dem’. The category also had very competitive hits such as ‘Jealous’ by Fireboy DML, ‘Soapy’ by Naira Marley, ‘Zanku (Legwork)’ by Zlatan, ‘Dumebi’ by Rema alongside hits from South Africa and Ghana.

Though Burna was absent at the awards, he sent a strong message to his fans. His representative told the crowd that the Grammy nominated singer has only two words for them: Thank You! But he disclosed that Burna’s mum who represented him last year at the event was enthused by the recognition and reward and asked fans to expect more madness in 2020.

The Soundcity MVP Awards was also a big night for Fireboy who took home the award for Listeners Choice. It was a welcome feat for the young dreadlocked artiste who was also absent at the show. The category had heavyweights hits such as Burna’s ‘Killin Dem’, Ghanaian DJ Mic Smith’s ‘Jama’, Rema’s ‘Dumebi’ as well as Joeboy’s ‘Baby’. It was the only win for the Olamide signed artiste.

Of the four categories he was nominated in, JoeBoy only clinched one award. He emerged winner in the Best Pop category that had Congolese singer Innoss’B, Tanzanian artistes, Nandy and Rayvanny, Kenyan Otile Brown as well as Nigerian music stars Marley, Teni and Kizz Daniel. Unlike the other boys, JoeBoy was available to pick up his plaque.

Other male winners of the night include Davido (Digital Artiste of the Year), DJ Spinall (African DJ of the Year) and Khaligraph Jones (Best Hip Hop).

Last edition, the organisers introduced a special recognition award for achievement outside music. Recipients of this year’s awards include DJ Cuppy who was recognised for her philanthropy. The daughter of billionaire businessman Femi Otedola while accepting her award took the opportunity to encourage the youths to aspire for greatness. Also toeing that line was the recipient of the Excellence in Social Entrepreneurship and Digital Influence, the CEO and Founder of iCreate Africa, Bright Jaja who despite the cold reception, spoke passionately about how he was able to create five million jobs in five years. He challenged celebrities and admonished the trend of youths spending more time on social media than in the classroom.

Other recipients of the excellence awards include the British-Nigerian professional boxer, Anthony Joshua for his excellence in sports; media entrepreneurs and political activists, Adebola Williams and Chude Jideonwo for their excellence in community and socio-political development; and musician 2Baba for excellence in music.

As much as award shows celebrate triumphs, quite a number of the awardees were absent at the event. Only few like Rema, JoeBoy, Savage, and Jones, the Kenyan who boldly announced that he was the best rapper in East Africa, were available to pick their awards. Weighing into the recent trend, Adepetu opined that some of the artistes lack requisite confidence.

“They are so afraid of the competition that they run into a hole during awards ceremonies. They can’t stand to be truly judged. Perhaps, if they are told they would win or they can rig it to win they will be there,” he says.

He further admits that in a normal setting, the artiste would never miss a platform that celebrates and rewards creative talents but in a situation where artistes lord over managers, the reverse is the case.

“In an industry where you have professional artistes, they will inform the organisers on time about their intended absence and make a clip of an acceptance speech but over here , you have management that can’t even manage their artistes. So, we have people who a little stardom overwhelms their reasoning and their place in the general mix of things. It is quite unfortunate when an artiste can even begin to imagine that they don’t need a platform. But you know they always come back to beg. After a failed year or two, that’s when you hear ‘Baba please help your boy’.”

He concluded by advising young millennial stars to be humble.

“Whatever stardom they may think they have, it still does not equal any of the legends of the music industry today and they should check out those ones and learn from their humility. That humility is the reason they are still relevant today and will continually be relevant until they answer the call of the Almighty.”

Apart from the earlier performances, other artistes like Tekno, Ghanaian dancehall star, Stonebwoy performed at the show. For Savage, who debuted her new low cropped hair style, she chose a mellow performance which ended with her declaring that “she doesn’t need a yeye boyfriend in 2020.” Who could the rumoured love interest of Wizkid be referring to?

Of all the performances however, it was Tanzanian Diamond Platnumz that stole the night. He raised the tempo of the awards with his stagemanship. He commanded every move and beat with his presence, whether he is moving his body to the pulsating beats of his music or following the moves of his dancers, he was a spectacle to watch. And when he resumed singing, he was still in control. The crowd need not understand his language, they only needed to flow with the rhythm of his songs to be intoxicated. Apparently, Platnumz had fun on stage and the crowd joined in the excitement, imitating his dance moves. Before he even concluded his set, the crowd gave him a loud applause.

The awards show marked the climax of the X100 concerts for 2019. It kicked off the Detty December programme with a four day festival that saw the best of fashion and lifestyle curated events as well as African music talents entertaining music fans at the Eko Atlantic Energy City in Lagos. The 2019 edition of the music awards show was sponsored by Nigerian Breweries Plc brands, Star Lager Beer and Star Radler.