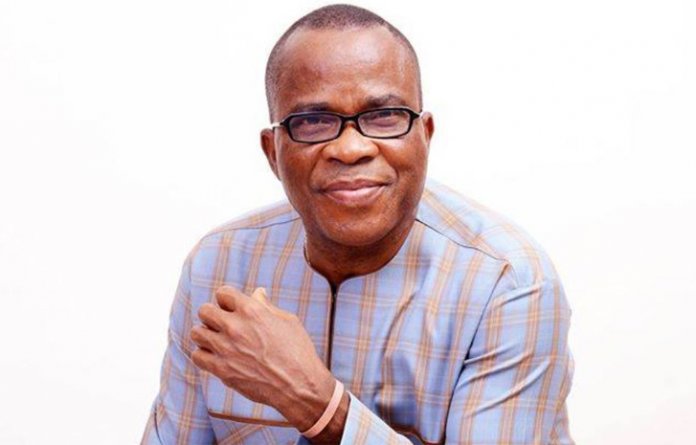 Nseobong Okon-Ekong scrutinizes the recent switch of political party loyalty by Chief Godwin Ezeemo, from the Peoples Progressive Alliance to the Peoples Democratic Party and concludes that the two-time governorship candidate in Anambra State still has many rivers to cross

Chairman/CEO Orient Group of Companies and two-time governorship candidate in Anambra State, Chief Godwin Ezeemo recently met with the Ndubisi Nwobu-led state executive members of the Peoples Democratic Party (PDP) at the party’s secretariat in Awka, to declare his intention to contest the 2021 governorship election in Anambra State on the platform of the former national ruling party. The declaration makes it the third time that Ezeemo is making attempts to be Governor of Anambra State, having done so in 2013 and 2017 on the platform of the defunct Action Congress (AC) and Peoples Progressive Alliance (PPA) respectively.

Perhaps, the Umuchu-born businessman-turned politician is the first to officially indicate his interest to run the 2021 race under the umbrella of the PDP. Others are yet to officially intimate the party of their intention to contest the next governorship election in Anambra on the platform of the erstwhile ruling party christened the largest political party in Africa. Analysts say Ezeemo is a good material for PDP considering the fact that he is substantial in terms of exposure, experience and quality of programmes geared towards

good governance for the state. Again, the gentle, disciplined, cool-headed Ezeemo is a highly popular politician and philanthropist in Anambra State.

Speaking on the intention of Ezeemo also known as Achinagbaroha, a political analyst, Comrade Vincent Ezekwueme said, “Ezeemo’s intention to contest the next governorship election with the PDP flag is okay by me. First, he has made name and a good one for that matter because his popularity is built on his struggle to lead Anambra State for the purpose of good governance. In fact, Ezeemo is now a household name, which makes him more salable in the state. Others are going about buying chieftaincy titles and awards to be popular, but Ezeemo is well known to Ndi Anambra already.”

“Second, he is a good man with deep passion for the wellbeing of humanity hence his interest to serve the good people of Anambra State,” Ezekwueme added. “Based on his passion to serve, I am sure he will guarantee a transparent and accountable governance devoid of corruption. So, with Ezeemo, it is as good as saying that PDP has presented us (Ndi Anambra,) with a dream choice for the job in Government House. Third, he has the capacity to lead Anambra State going by his achievements – assets and investment in Nigeria and other countries as an international businessman and that is a huge advantage for PDP.”

Sitting atop chains of businesses, Ezeemo emerged on Anambra political scene in 2013, indicating his interest to run for governor on the platform of AC, now defunct. He got a baptism of fire from the leader of AC in the person of the current Nigeria Minister of Labour and Productivity, Dr. Chris Ngige who after promising to give him the ticket of the party went ahead to contest the governorship election himself. Ngige, eventually defeated the Achinagbaroha at the primary to emerge the candidate of AC prompting Ezeemo to pitch tent with PPA where he secured the ticket as candidate for the 2013 race.

Both Ngige and Ezeemo lost the 2013 race to the incumbent Governor Willie Obiano who contested on the platform of All Progressives Grand Alliance (APGA). In 2017, Ezeemo again entered the governorship race riding on the PPA train and, again, he lost, taking a distant fifth position or so. Still much interested to serve Ndi Anambra as CEO of the Government House at Agu Awka, the Umuchu-born businessman has once again come out to try his luck this time through PDP, which, according to analysts, is a much bigger party with higher stakes than PPA.

The question now is, how far can Ezeemo go buoyed by the PDP? The answer to this question lies in how the Achinagbaroha would handle the issues and hurdles he faces as an aspirant on the platform of the party. The good, the bad and the ugly associated with party politics are waiting for him in hitherto Africa’s largest political party. The good side of it is that the PDP is capable of winning the election as a political party, so whosoever becomes the candidate of the party can emerge as the governor of Anambra State. The PDP has enough people -faithful followers– to win the 2021 governorship election in Anambra State.

In his previous campaign as candidate of the PPA to govern Anambra, Ezeemo has expounded a manifesto with the acronym; SHAPE, which captured his vision in Security, Health, Agriculture, Power/Policy and Education. He announced an intention to develop first class healthcare facilities by partnering the private sector to improve healthcare and services.

He promised to run an administration that engage the youths in meaningful economic activities as well as reinventing the community policing system, while deploying CCTV cameras across the state.

As a successful farmer, Ezeemo presented a set of developmental programmes for Anambra that put agriculture in a pivotal position. Apart from the strategy to encourage private investors in agriculture to make Anambra State a food sufficient, another strategy on this wise is the proposed relationship with higher institutions to develop agricultural research centres.

With Ezeemo as governor, the people of Anambra can be assured of capacity building and continuous training for teachers, a robust library system and skill acquisition centres; sports and arts academies.

Arguably, Anambra will become the first state in the country to take seriously the development of cleaner sources of energy that are eco-friendly, articulating policies for effective waste recycling, waste management and erosion control.

Political pundits are of the opinion that if PDP can harness the popularity and acceptability of leaders of the party such as former Governor Peter Obi, Senator Ben Obi, Chike Obidigbo who is being wooed by the leaders of the party for support ahead of 2021 polls, Dubem Obaze, Alex Obiogbolu, Osita Chidoka, Uche Ekwunife, Stella Odua and the rest of them with Ezeemo as candidate, the party would easily defeat others at the polls. A marketable candidate and a united PDP is all that the acclaimed largest political party on the continent of Africa needs to reclaim Anambra State in 2021.

The bad side of the show is that an aspirant could face betrayers in the party, those who speak from two sides of their mouth and end up doing more harm than good to someone that put hope in them. Third is the ugly such as imposition of a candidate on others. Some can use thugs and even security agents to cause mayhem all in a bid to have their way. Records show that party primary election in Nigeria is never a smooth exercise and nobody can safely trust a political party when it comes to the conduct of primary election. Party primary is not a gentleman’s affair. Ezeemo being a gentleman has to beware of the good, the bad and the ugly associated with party primary elections.

One more hurdle that lies ahead of Ezeemo is the issue of zoning. If PDP sticks to its earlier stand against zoning, then his chances of emerging the flag bearer of the party could be jeopardized. A group rooting for Ezeemo to be governor known as Friends of Godwin Chukwunaenye Ezeemo (FOGCE) is making frantic efforts to draw the attention of PDP to the issue of zoning as, according to the group, PDP stands a better chance to win the 2021 race if the party concedes its ticket to the southern senatorial district.

Director General of FOGCE, Hon Ibuchim Ezekwelu in an encounter with journalists stated that PDP is as good as coasting home to victory if the party yields to the clamour for zoning by relevant stakeholders in Anambra State.

He said, “All relevant stakeholders such as the traditional rulers, town unions and market leaders including church leaders are of the opinion that it is the turn of Anambra South to produce the next governor of Anambra State and I think zoning the ticket to the South will largely work in favour of the PDP.”

Hon Ibuchim added, “I have been in the system since 1999 as a grassroots politician so I know how things work in Anambra State. The impression is that the Central Senatorial Zone has taken 12 years with Ngige and Peter Obi respectively and the North senatorial zone likewise would take eight years under the incumbent Govrenor Willie Obiano by 2022, so it is justifiable to say that it is the turn of the southern senatorial zone to occupy the Government House at Agu Awka and that is where the minds of Ndi Anambra are going, so PDP has to go with the people by zoning the ticket to the South.”

According to Ibuchim, zoning the ticket to the South and the popularity of Ezeemo are all that the PDP needs to reclaim the Government House at Agu Awka because Ndi Anambra know what they need and will identify such when they see one.

The question now is, how far can Ezeemo go buoyed by the PDP? The answer to this question lies in how the Achinagbaroha would handle the issues and hurdles he faces as an aspirant on the platform of the party. The good, the bad and the ugly associated with party politics are waiting for him in hitherto Africa’s largest political party. The good side of it is that the PDP is capable of winning the election as a political party, so whosoever becomes the candidate of the party can emerge as the governor of Anambra State. The PDP has enough people-faithful followers-to win the 2021 governorship election in Anambra State

Omo-Agege: Uzodinma’s Electoral Victory a Plus for Democracy