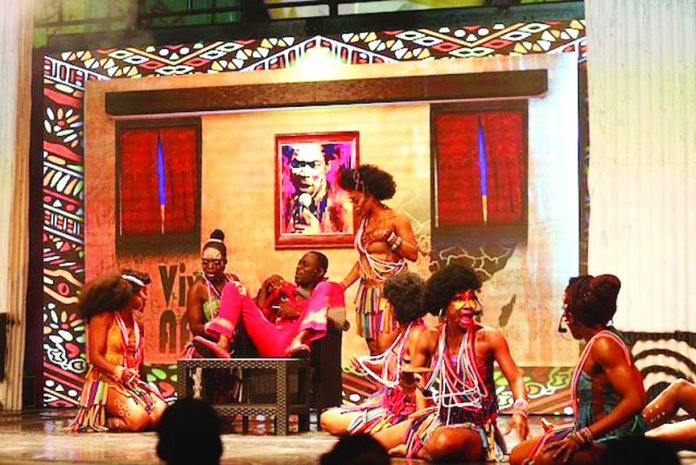 An updated version of the Bolanle Austen-Peters Production’s musical about Fela’s women, who eventually became his wives, revisits their unalloyed loyalty to Fela and his protest music against all odds. Okechukwu Uwaezuoke reports

DRAMA
Perhaps, it is high time someone created a buzz around the Kalakuta Queens! For, indeed, no anecdotes about the legendary Fela Anikulapo-Kuti’s “Republic” would be deemed complete without an – albeit tangential – allusion to the women around him? Hence, credit goes to the Bolanle Austen-Peters for dredging up the memories of the Nigerian music scene’s recent history.

For 10 days, Austen-Peters’ production outfit – Bolanle-Austen-Peters Productions (BAP) – regaled the Lagos theatre-going audience with an electrifying musical, whose storyline swirled around these women, who eventually became his wives. Precisely, the musical production, which for the greater part of its 10-day run held at 3 pm and 7 pm daily at the Terra Arena in Victoria Island, ran from Saturday, December 14 to Sunday, January 5.

Actually, the current musical production, Fela’s Republic and the Kalakuta Queens was a slight tweaking of an earlier version, which for the past two years had won the hearts of not only audiences in Lagos, but also in Abuja, the Egyptian capital city Cairo and South Africa. Nonetheless, the pivotal theme remains the same: the Kalakuta Queens’ commitment to Fela and his protest music and their unwavering loyalty during the Afro-beat legend’s frequent run-ins with the establishment.

For the habitués of the original Fela’s Shrine, the Kalakuta Queens have become virtual mythical figures, whose exploits many would liken to those of the legendary Scythian Amazons. These were women, who could not have existed outside the anti-establishment world of the Kalakuta Republic. Cocooned as they were in this delusional world, details about their lives before the Shrine is still shrouded in the mists of time. This should explain why the production makes their years with Fela its focal point.

Of course, it is not unlikely that the musical owes its full-house attendance to the mystique surrounding the personality, Fela. Indeed, more than two decades after his demise, his name still elicits awe beyond the circle of his dewy-eyed devotees and even extends to such high-profile figures as the French President Emmanuel Macron and Nigeria’s vice-president Yemi Osinbajo.

So, what indeed could have been so special about this reefer-smoking maverick? Many allude to his revolutionary rants and jeremiads, which they liken to prophecies. Even Femi, the jumpsuit-sporting legend’s eldest son, once said in an interview with THISDAY: “Most of what Fela used to say in those days have come to pass today.”

Perhaps, attendees should focus on his potent message and ignore his free-flowing profanity and his decadent lifestyle. Besides, the hypnotic rhythms of his patented musical idiom, which had been known to teleport otherwise sober adults into a state of delirium at his gigs, wouldn’t let anyone lapse into prudish whims. Such an audacious one would immediately be silenced and scorned for his old-fashioned ideas. Prudery has no place in this delusional state of befuddlement. After all, Fela’s half-clad and pelvic-gyrating female dancers were only part of his overall message to mankind.

Meanwhile, the BAP’s intervention, meant to engrave their names in history, is the first of its kind. It is hailed by the two of the surviving Kalakuta Queens Laide and Lara, who watched the musical on its closing day, for its faithful reproduction of their years around the late Fela.

Concede it to the musical icon. He was one of Nigeria’s most influential figures of his time. Also, a personality cult that developed around him inevitably rubbed off on his musical progenies. As for his bequest to humanity, Afro-beat, its frenzied rhythms and anti-establishment lyrics have extended its appeal to the present long after his demise. As Fela in the musical, the first-time actor Laitan Adeniji – a.k.a. Heavy Wind – has earned himself a seat of honour among the latter-day thespian greats. The multi-instrumentalist musician, who had been weaned on Fela’s music from as far back as when he was only five years old, though the role was both physically and mentally challenging. Of course, becoming Fela was only a part of his brief.

The real challenge was reenacting the appeal of the icon’s “Yabis” sessions, which featured alternately light-hearted and vitriolic anti-government tirades. His pivotal role in the musical is the most intriguing. Kudos to his deft interpretation of the legend’s persona, first as a revolutionary and then as a philanderer and a mediator in his wives’ disputes.

Talking about his wives, the musical leaves no viewer about the unflinching support of these women, whose chatter livened up the dank recesses of Fela’s Republic. With their husband and idol, they survived those turbulent periods of incessant raids by the military and the police and the eventual burning down of the Shrine. They also relished their sunnier moments of solidarity, which pitted them against interlopers like Malaika (played by Osas Ighodaro and Uru Eke).

Yet, Fela’s Afro-centric ideology, which is not quite consistent and coherent in its expression, sometimes leaves even these faithful consorts confounded. For, what could have been so special about Malaika as to make the legend succumb so easily to her charms? And why did he have to wait for so long to legitimise his union with them?

Their collective lamentations apparently restrain the Grim Reaper’s sickle from prematurely harvesting Fela’s soul after the burning down of the Republic by the rampaging soldiers. Fela awakens to the reality of the devastation around him, the most painful being the excruciating physical separation from his mother, Funmilayo Ransome-Kuti (played by Inna Erizia).

Beneath the screen of eccentricity ironically lurks some kind of mind-liberating philosophy. Yet, these women have long after Fela’s demise been left to their own devices. Understandably, the life they built around the central figure Fela had to come to an abrupt end with his unexpected demise on August 2, 1997.