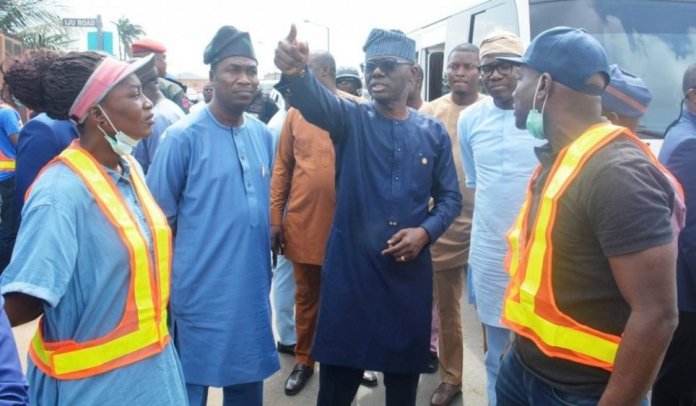 Government’s investment in transport infrastructure is a big factor in people’s quality of life. It is the backbone and chief driver of socio-economic development, which every country strives to achieve. Roads and bridges, in particular, change the face of landscapes; increase connectivity, bring societies closer to the outside world, and attract investment from far and wide.

Rightly, one of the cardinal programmes of Mr. Babajide Sanwo-Olu’s administration is the provision of world class infrastructural facilities to support the growing population of Lagos State and serve as the development driver of a vision of being Africa’s model smart city, a global economic and financial hub which is a fundamental ingredient for economic growth and development.

The commitment to infrastructural renewal, expansion, upgrading and regeneration is borne out of the fact that it is a prerequisite to an efficient and integrated transportation, health, waste management and education system. Hence, the strategic role of the Ministry of Works and Infrastructure to the overall performance and delivery of the major pillars of the development agenda of this administration tagged: THEMES.

Thus, it really goes beyond routine that the first assignment of the governor to the state’s special adviser on Works and Infrastructure upon her assumption of duty was to conduct assessment tour of some critical roads across the state. The special adviser, Aramide Adeyoye saw first-hand the trauma the people suffer on some of the roads and reported her findings to the governor who felt the pains of the people and directed that palliative measures should be carried out to alleviate the sufferings of the people immediately.

Many people who mostly don’t understand what is involved in road rehabilitation wanted all the roads in the state to be fixed instantly. There was dissonance of noise and cynicism from different parts of the state and on the mass media. The social media was abuzz, but narrative is changing very fast now that evidence of the government resolve to tame the monster of bad roads is becoming manifest.

Not that the governor did not prepare or understand what was to be done from the outset. Far from it, but the main objective of the government is simply to apply the right treatment at the right time to achieve the desired level of service.

Lagos residents now attest to increase in the speed of work on road infrastructure across different local government areas of the state which is in line with the promise to commence extensive road rehabilitation and construction once the heaviness of the rain subsides.

The ongoing massive programme of road repairs, which the state has tagged ‘Zero Tolerance for Potholes Initiative’ amply attest to the determined drive of the administration to make road infrastructure a vehicle of its greater Lagos journey.

As part of the roads repair programme, there is a Junction Improvement Scheme to resolve bottlenecks at critical junctions. Sixty of such junctions have been identified, and in the first phase, upgrades have begun on four of them.

Guided by the aphorism that says good roads make crucial contribution to economic development and growth, the government has recently completed and commissioned a whopping 31 roads in Ojokoro Local Council Development Area, marking a watershed in Mr. Sanwo-Olu administration’s stride to bring the dividend of democracy to the good people of Lagos and most especially the dwellers of Ojokoro LCDA, who are the direct beneficiaries of the 20.216km network of roads project.

The Pen Cinema flyover is another massive infrastructural project the government is very keen at completing very soon. As at Friday, January 3, 2020 when the governor went on inspection of the Lagos-Badagry Expressway and Pen Cinema Flyover, the Agboju to Trade Fair section of the former had been completed while there is assurance that pen Cinema Bridge will be delivered in six months’ time.
The state is also doing rehabilitation/ upgrading of the six-kilometer phase one of the 11-kilometer long Ijede road andupgrading of Oniru network of roads under a public infrastructure improvement partnership (PIIP) arrangement.

It is now certain that the proposed 38Km Fourth Mainland bridge project which has been dominant on the to-do-list of the state strategic transport master plan will soon see the light of day. Following the request for expression of interest (Request for EOI) issued on 27th November, 2019 and the public bid opening ceremony held on 18th December, 2019 at the Bagauda Kaltho Press Centre, no fewer than 39 construction companies across the globe expressed interest in the construction of the bridge. Some 32 companies have subsequently crossed the first hurdle in the jostling for the construction of the proposed bridge.

From the explanation of the special adviser the proposed project comprises of road and bridges with a design speed of 120 kilometres per hour. It will starts at Abraham Adesanya in Ajah, on the Eti-Osa-Lekki-Epe corridor, and traverses to the North West direction towards the lagoon shoreline of Lagos-Ibadan Expressway via Owutu/Ishawo in Ikorodu.

Though Mr. Sanwo-Olu is paying similar attention to other sectors, it is interestingly that, going through different parts of the state, one will see Public Works Corporation, High-tech,Chinese Construction Company (CCECC), Metropolitan Construction Company, Arab Contractors, Messers Julius Berger, and other contractors working on different parts of the state roads. This is not just happening without a proper grounding. It is so because the government had focused on engaging stakeholders for collaboration and done its home work properly when the complaints were on.

It could be recalled that the Ministry of Works and Infrastructure recently issued a statement that Lagos State Government will henceforth insist on Standard Operating Procedure (SOP), spelt out in all construction projects.

This was not only in line with The THEMES Agenda of the administration, it was as a result of the ugly experience of incessant failure of newly constructed structures before their lifespan expires. The experience confirms the fact that some contractors do not conform to the standard procurement process.

Sanwo-Olu has demonstrated leadership, unusual passion and unmatched pragmatism. The governor has kept the hope of a greater Lagos alive. In a sum, it is a fact that government do not have unlimited resources, and also cannot do everything at once, but Lagosians can be rest assured that the Sanwo-Olu administration has a robust plan in place to ensure every part of the state benefits from this exercise as quickly as possible.
––Ogundeji & Musbau wrote from Lagos State Ministry of Works & Infrastructure, Alausa, Ikeja.