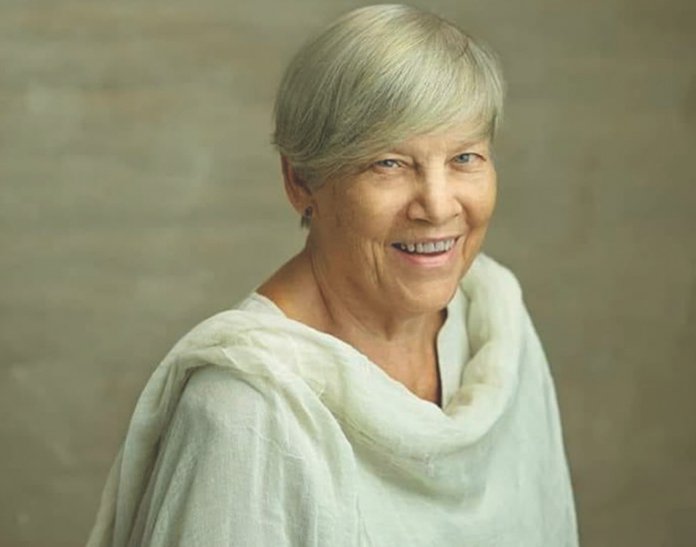 Shock waves rippled through the local art community when the news of Chief Aino Oni-Okpaku demise filtered in. In an ensuing outpouring of tributes, friends, family and associates extol her lasting legacies. Yinka Olatunbosun reports.

TRIBUTE
She had lost the battle to cancer since Thursday, December 26. But, the sad news about her demise filtered into Lagos on Friday, January 3, a day after her 81st birthday. Chief Aino Oni-Okpaku – just recently conferred with the title Yeye Afonasola of Ogotun-Ekiti – had departed this life in the Swedish town of Gothenburg, surrounded by her loved ones.

Hers was a deeply fascinating story. It was a story of endless love and commitment. A textile art graduate of the School of Arts and Crafts, Gothenburg in Sweden, she was in the U. S. on an American-Scandinavian Association scholarship, studying for her Master of Fine Arts degree from the University of California. This was where and when she met her late husband, Gabriel Olusegun Oni-Okpako.

Together, the couple had returned to Lagos in 1973 to settle down. Quintessence was created in 1975 in Falomo Shopping Centre, Ikoyi, Lagos after her two-year stint Legacy, an architectural firm.
With the sudden death of her husband from injuries sustained during a polo game in Lagos, she kept running the shop, which sold electronics, but directed its focus more to the arts and crafts as well as to supporting indigenous artists.

“To better appreciate her, we need to recall that she was only in her late 30s when her husband, Gabriel Olusegun Oni-Okpaku died, yet she refrained from remarrying,” the renowned Lagos-based art collector, Omooba Yemisi Shyllon said. “I never met her husband, but OYASAF has owned an 8ft × 5ft of his oil painting for some 20 years.”

Aderemi Adegbite, an interdisciplinary artist who had once collaborated with her in one of her charity projects recalled how he met her. According to him, the Old Falomo Shopping Complex was to be demolished and replaced with a new one. So, he chose to document this iconic landmark architecture in Ikoyi not only because of the beauty of its architecture, but also because it housed Quintessence.

“During my research and documentation, I went from shop to shop everyday for a month before the demolition of the complex commenced,” he recalled. “For some reasons, a lot of owners were not interested in talking about the issues that led to the hasty decision of the state government to bring down one of the city-centre important architecture but Chief Aino Oni-Okpako and Mr Moses Ohiomokhare gave their time to me. They had paid their rent and other charges up to date. I documented the pre-demolition and the demolition process until there was nothing to photograph. I will say this was my first encounter with the Oyinbo woman, who was soft spoken and knew so much about the Nigerian art scene.”

Tributes also poured in from artists like Kolade Oshinowo, Chinwe Uwatse, Lekan Onabanjo as well as from the gallery owner Olaseinde Odimayo. Odimayo, in his tribute had attributed the attraction of art collectors, enthusiasts and other clients to Quintessence to the “fine and high quality items stocked [at the shop] and the fact that Aino and her late husband were fine artists with fine taste.”
“Over time, art gained more prominence in the gallery’s actvities and art exhibitions of the works of local and foreign artists started holding there,” Odimayo recalled. “Book readings also started featuring there … In addition works of old masters such as Ben Enwonwu and Ben Osawe and emerging artists were being routinely stocked.”

The artist Adegbite, who worked also with Chief Oni-Okpaku on her charity project, recalled the selflessness with which the initiative was executed.
“I think it was in 2014 or 2015 that I received a call from Mr Moses Ohiomokhare,” he recalled. “For the first time, I was told about the Eruobodo Foundation and its operations. Few days later, I was taken to Ijebu-Ode, where the foundation have its home where children with physical challenges are housed and taken care of. I was indeed, touched. I had to wait longer to photograph some of them and also had to play and smile before some could allow me to photograph them. In some cases it was singing that did the magic. It was an experience that will Iinger for a long in my memory.”
The photographs taken by Adegbite were used for a calendar and a big banner mounted at the entrance of Quintessence, where it remained for years.

In his eulogy, Shyllon acknowledged the contributions of this legendary art connoisseur to the development of arts and humanity. “The most enviable legacy of Mrs Oni-Okpaku, which calls for appreciation and celebration, is in her long years of selflessness of sponsorship and management of the Eru Obodo Foundation. This foundation of hers, for helping poor and abandoned babies, has for decades, been busy growing and giving succour and promise, to the abandoned babies on our streets, including those deformed and afflicted.

Through Eru Obodo House, she has for decades picked and taken care of such babies and organised numerous plastic surgeries and cure to many of them, within Nigeria and at her country of origin, Sweden. By the time of her death, some of such abandoned babies have been old enough to inter marry with many of them, having become part of the management of her Eru Obodo Home, which is located on about six acres of land in Ijebu ode. In addition, she has thrice responded positively to my requests for assistance for art workshops and market opportunities in Sweden, for three Nigerian artists.”

In 2013, Quintessence had to be relocated to Parkview estate gate in Ikoyi, where it found a bigger space and a new home.
An endless list of artists had since benefited from Quintessence, through exhibitions, residencies and workshops both locally and internationally.
Beyond the art scene, Chief Mrs Oni-Okpaku had planted her footprints in urban beautification. She was a long time treasurer, Lagos Horticultural Society, and a former executive member of the Lagos Polo Club and member, Ikoyi Club.

Survived by two children, Jude and Tina, she will be buried in Gothenburg, Sweden, on Monday, January 20. Meanwhile, a condolence register has been opened in Quintessence, Parkview Estate, off Gerard Road, Ikoyi and Eruobodo House, 1, Stadium Road, Ijebu-Ode. A long-time curator at Quintessence Gallery, Moses Omohiokhare revealed that a memorial service will also be held in her honour in Lagos in February.