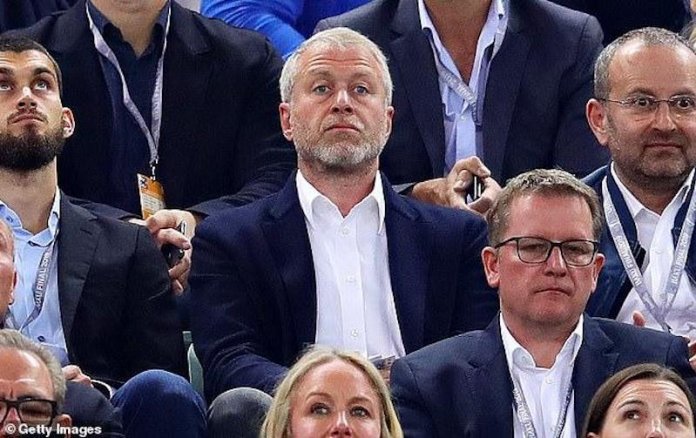 Roman Abramovich pumped £247million into Chelsea in 2018-19 it has emerged, despite barely being seen at Stamford Bridge in the last two years.

Abramovich has continued to invest heavily despite running the club from abroad due to ongoing issues over his UK visa amid a souring of diplomatic relations between the British government and Russia.

The Premier League club’s latest accounts also show they paid a total of £26.6m in compensation after sacking former manager Antonio Conte and his backroom staff.

The club’s wage bill went up by £41m in 2019 despite not playing in the Champions League.

And there were also big-money moves for new players including Kepa Arrizabalaga, Christian Pulisic, Mateo Kovacic and Jorginho.

Chelsea have now spent an eye-watering £90m on sacking managers since Abramovich took over in 2004.

Former Italy midfielder Conte steered Chelsea to the 2017 Premier League title but was dismissed a year later with 12 months left on his contract as the Blues finished fifth and failed to qualify for the Champions League.

Conte also led Chelsea to victory in the 2018 FA Cup, with a 1-0 win over Manchester United in the final.

“Exceptional items in the current year of £26.6m relate to changes in respect of the men’s team management and coaching staff, together with associated legal costs,” read Chelsea’s latest set of published accounts, for the year ending June 30, 2019.

Abramovich, 53, is the most successful owner in the club’s history.

The Blues have won the Premier League five times, the FA Cup five times, three League Cups, the Europa League twice and the Champions League under his ownership.

He was once a regular fixture in the directors’ box at Stamford Bridge, but a visa dispute has kept him largely out of the country since early 2018.

Abramovich withdrew an application for a British visa in June 2018 following reported delays in his application.

His previous tier-1 visa, which allows people who invest more than £2m in the British economy to stay for 40 months, had been granted before more stringent regulations were introduced in April 2015 as relations between the British and Russian governments soured.

The British government launched a crackdown on wealthy investors coming to the UK after the poisoning in Salisbury of Sergei and Yulia Skripal in March 2018.

Former Russian double-agent Sergei Skripal was left in a critical condition when his home was contaminated with nerve agent Novichok. His daughter, Yulia, was also poisoned in a suspected attack by Russian spies.

Abramovich instead secured an Israeli passport. Israeli citizens may visit the UK as a visitor for a ‘maximum period of six months’ but are required to obtain a UK visa if they want to ‘live, work or study’ in the UK.

His appearance at the Europa League final in Baku in May, in which the Blues beat Arsenal 4-1, was the first time he’d watched his side in action in over a year.

Reports suggested the visa row had led Abramovich to put the club up for sale, but no buyers were willing to pay the £2.5billion price tag.

Chairman Bruce Buck told the UK’s Guardian last November that Abramovich still helped run the club as much as ever, despite having to keep his distance.

“He talks to Marina (Granovskaia) – the board member who supervises the football operation – several times a day, every day. Marina has been doing that for seven or eight years; that hasn’t let up or changed at all.”