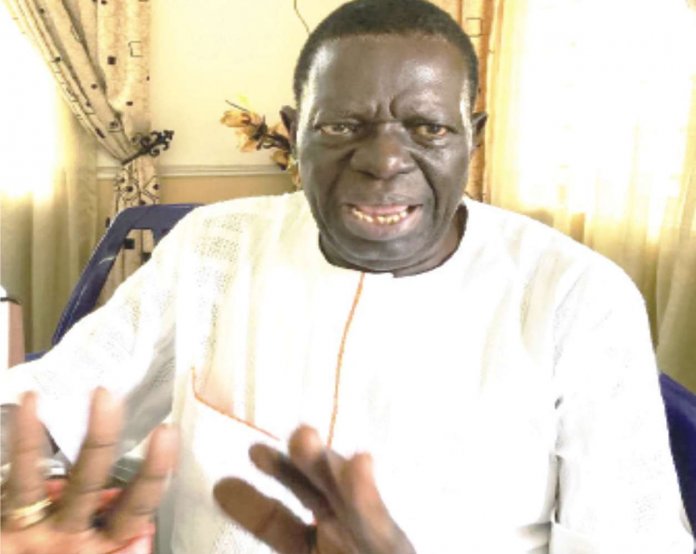 A former Chief Whip of the Senate, Senator Roland Owie, has stated that power should remain in the northern part of the country at least for another four years after 2023 for equity and fairness.

Speaking to journalists at his residence in Benin City, the senator, who represented Edo South Senatorial district between 1999 and 2003, however, posited that should power shift to the south pole in 2023, it should be ceded to the South-east geo-political zone of the country.

Defending his position, Owie said the south has had more time at the presidency than the north since 1999, a situation he said was occasioned by the death of President Umaru Yar’Adua and the decision of President Goodluck Jonathan to contest after he finished the tenure of Yar’Adua against reasonable advice.

He said: “The problem we have in Nigeria particularly those of us from the southern part is that we are sometime not realistic and we forget that if we are going to equity, we must go with clean hands.

“Presidency came from South-west with President Olusegun Obasanjo even though he lost his polling unit, he lost his polling booth, he lost his local government and lost the entire zone. But he became President of Nigeria and did eight years. Then power shifted to the north and produced Yar’Adua, one of the best presidents Nigeria has ever had. May his soul rest in peace. The man who agreed that his election was flawed, and brought peace to Niger Delta died and the then Vice President Goodluck Jonathan took over.

“You can see the wisdom of Abacha in his constitution that was not used where he made provision for a second Vice President from the zone that produces the president. If we had adopted that constitution, it means when Yar’Adua died, the Vice President from his zone would have taken over and we would not have been where we are today talking about doctrine of necessity.

“When Yar’Adua died and Jonathan took over and finished the remaining years of the tenure and took another four years. If there were no greedy leaders, I remember what I said in our South-south leaders meeting that Jonathan should allow somebody from the north run for the presidency, explaining that age is on his side. I said when it rotates back to the South-south, he can still run but those who felt that they owned PDP, who were not there when PDP was formed lured the man and pushed him to go for a third term.

“Today, when you calculate after President Muhammadu Buhari’s tenure expires in 2023, the north will have four years, 244 days to complete their own quota of the presidency. So, it is not the turn of the south yet. When there is no justice, there can’t be peace. The slot for 2023 is for the north and when that term comes to an end, the presidency will come to the south and then should go to South-east.”

On why it should then be South-east, Owie added: “It is the South-easterners that are making this country remain united. Go to every part of the 36 states of the federation, after the indigenes, the next most populated group are the Igbos. When presidency comes back to the south, it should go to the South-east, not South-west, not South-south.

“However, the only thing we are going to talk about is that power should now return to the south after the next four years post-2023 so whichever party is fielding a candidate in 2023, that candidate must be willing and ready to sign that party and its candidate will do four years and then the 244 days can be sorted out through a doctrine of necessity probably by compensating them with appointments.”

Owie said as far back as 1983, there was already a plan that the presidency should go to the South-east after the second term of Alhaji Shehu Shagari before military truncated the second Republic.

“Our second generation founding fathers, late Alex Ekweme and co. after all the hustle finally agreed on the six zonal arrangements and the civilian regime started in 1999. Quite frankly, I was Edo State coordinator for Ekweme ahead of the PDP presidential primaries. It was clear that power was going to shift to the South-east because when Shagari came in 1979 and did four years and he came in 1983, it was not negotiable that by the time he finished his second term, the presidency will go to the south, and go to the South-east.

“By all standard, everybody was looking up to late Ekweme that he will take that slot but unfortunately, the evil carriers, the military came and truncated that regime in 1984 and so all those plans could not materialise.

“A civilian regime again came in 1999 and it was clear that the presidency will start from the south and for me I supported that it should go to South-east. But at the end of the day, my mentor, a man I respect, President Ibrahim Babangida and some others thought otherwise. When myself and late Chuba Okadigbo visited Babangida in the build up to that election, he made a veiled reference to the presidency going to South-west. One night, I went back to him for clarification and he said yes, it has to go to the South-west. He said Roland, it is not my fault, for me I need to equalise June 12, God knows my heart, the buck stops at my table, they say June 12 was annulled, I took responsibility but only God knows what happened; the underneath things that happened, by the time he told me, I pitied him,” he said.