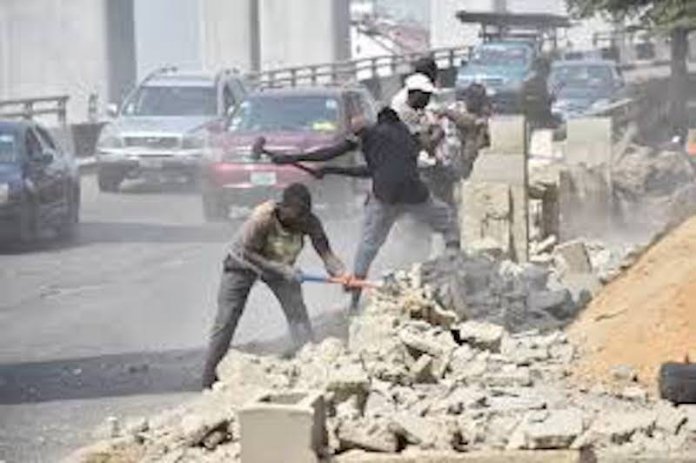 The Federal Government on Friday began demolition of illegal fences under some bridges in Lagos, the News Agency of Nigeria (NAN) reports.

A NAN correspondent who monitored the exercise reports that the demolition exercise began with a fence of about 250 metres built under the descent of the Apongbon Bridge on the CMS-bound carriageway on Lagos Island.

The fence which was still under construction had been raised by seven to eight coaches on various sections.

Some officials wearing the tags of “Toll Royalty Car Park Technologies“ came out to challenge the process but were told by the engineer supervising the team to visit the Federal Ministry of Works.

Mrs Musiliat Aloba, a Senior Engineer in the ministry who led a team of engineers and security operatives on the exercise, said that she was acting on instruction to ensure that under the bridges were visible.

“I am not directed to speak to anyone. Please come to the Federal Ministry of Works,’’ she said.

NAN reports that the team went further to demolish fences concealing about 300 metres under the Obalende/Apongbon Flyover Bridge on the CMS-bound carriageway.

The team also demolished another set of fences metres away under the same Obalende/Apongbon Flyover Bridge.

However, there was misunderstanding with the commencement of demolition of fences under the Ramp of the CMS Bridge which was nearing completion on some sections.

Some workmen on site who tried to resist the demolition argued that it was a legal project which had approval.

Aloba explained her assignment insisting that “nothing must block under the bridges’’.

“When you conceal the bridge, nobody can see what happens under. The Federal Government has lost so much money due to burnt bridges,’’ she explained.

NAN reports that extension of the fences being constructed to link the CMS Bus Stop foot bridge was also demolished.

Responding to the exercise, the Federal Controller of Works in Lagos, Mr Adedamola Kuti told NAN on telephone that the removal of illegal structures under bridges was a continuous exercise.

Kuti explained that the ministry began the demolition in 2018, saying that it was aimed as safeguarding the bridges from all forms of abuses causing damage to them.

He debunked claims by some people who said they had approval to build structures under any bridge in Lagos State.

Kuti said demolition of other illegal structures under bridges where notices had been served in the past would soon begin.

“It is an ongoing exercise to protect our bridges from abuse and damage,’’ Kuti said. (NAN)