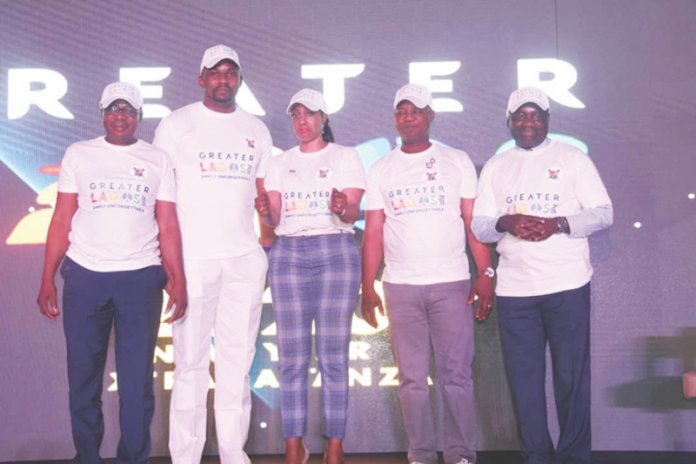 The Lagos State Ministry of Tourism, Arts and Culture unveiled its forthcoming end of the year festival dubbed ‘Greater Lagos 2020’ and themed ‘Simply Unforgettable’, at the Hall C of the Landmark Events Centre in Victoria Island, Lagos and the grand entry of celebrities like Olamide, Fireboy, Zlatan and D.J. Spinall had many of the attendees cheering.

After the Master of Ceremony, comedian Woli Arole, invited the host Commissioner for Tourism, Arts and Culture, Mrs. Olufunke Adebolu, to the podium she said that ‘Greater Lagos 2020’ is targeted at showing Nigerians home and abroad how Lagos has evolved in the last decade and the opportunities available to investors regardless of their race or nationality.

Representatives from the event’s sponsors, Mr. Rotimi Odusola from Guinness and Ms. Tolu Adegoke from Access Bank, two representatives from two of the partners, Ms. Jennifer Ukoh from Multichoice Nigeria and Mr. Erhumu Bayagbon from Airtel, as well as a few other Lagos State Government officials not limited to; the Commissioner for Information and Strategy, Mr. Gbenga Omotoso, Special Adviser to the Governor on Arts and Culture, Hon. Bonu Solomon Saanu, Senior Special Assistant on Diaspora and Foreign Affairs, Mr. Jermaine Sanwo-Olu, Permanent Secretary for the Ministry of Tourism, Mr. Babatunde Mesewaku.

Taking the mic from Mrs. Adebolu, the hit-maker Olamide speaks on his full support of the event and urge the media agencies to throw their weight behind the ministries involved in order to achieve the Greater Lagos 2020 dream adding that, “Greater Lagos 2020 is an event that better position this city and everyone who wants to achieve anything worthwhile in this city should support it.” He handed the microphone to D.J. Spinall four minutes later and he also declare his alliance and next was Fireboy who said, “for someone who has lived his whole life in Lagos and do business in this city, I put my weight behind the forthcoming festival which I am certain will better position it.

If you have been doing business in Lagos all year long, this event is for you to merry.” Then, other dignitaries seated on the podium said their piece with Guinness representative, the Legal Director and Company Secretary, Mr. Rotimi Odusola noting that there will so much beverages, alcoholic and non-alcoholic, available at the event which they are very excited to be part of.

Beside the serious talks and unveiling of the logo of the event and commercial with colours that impressed everyone present, there was an energetic dance presentation from the Dance Machine Empire and a buffet which we all gathered to munch at the end of the press conference.

According to Mrs. Adebolu, Greater Lagos 2020 will kick with micro events in five locations in Lagos State; Ikeja in Agege Stadium on December 25 same day as the grand opening in Eko Atlantic City, followed by Ikorodu inside the Town Hall on December 26, Badagry in Badagry Grammar School on December 27, Epe inside the Youth Centre on December 28, Lagos Island at the Eko Atlantic December 29 and build to a grand finale on New Year Eve which will hold simultaneously in all aforementioned venues on December 31st.