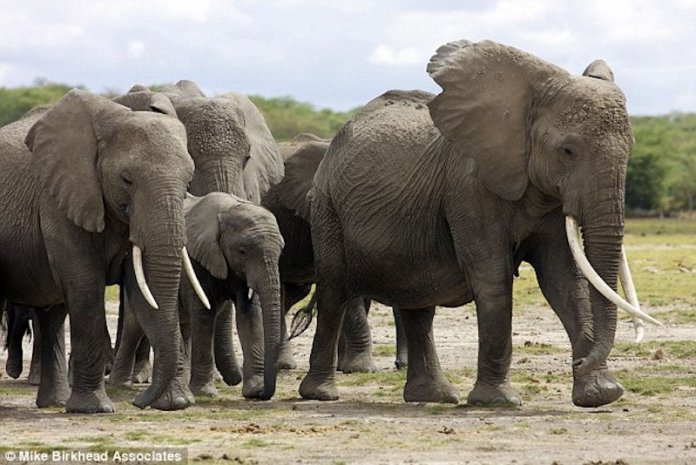 A herd of some 250 elephants has been spotted in Borno State, close to the borders with Cameroon and Chad.

It is the first reported sighting of elephants in the region since the Boko Haram jihadist insurgency began a decade ago, reports RFi France.

“The sighting of this herd means Nigeria’s elephant population has effectively doubled,” Tunde Marokinyo, co-founder of Africa Nature Investors, says excitedly on the telephone from London, in between visits to the Gashaka Gumti National Park in North-east Nigeria.

Hundreds of elephants used to migrate through the region up until a decade ago at around the time Boko Haram began fighting to establish an Islamic state. In 2014, Abubakar Shekau’s faction of Boko Haram set up camp in the Sambisa Forest that was formerly a game reserve the size of Belgium and The Netherlands.

Three major migration routes passed through the Sambisa Forest. These same routes that follow water sources are used by insurgents to escape military bombardment. The heavy exchange of artillery fire between the military and the insurgents drove most of the big game away from the reserve.

There has also been intense fighting and aerial bombardments on the shores of Lake Chad for much of the past decade. Elephants had formerly been frequent visitors to the lake.

Up until now, it had been unclear what happened to the elephants that once roamed the Sambisa Forest and savannahs in Borno and Yobe states.

But the war is by no means over with Boko Haram regularly carrying out raids on villages and kidnapping aid workers.

The new herd of elephants was spotted a few kilometres from Rann during a humanitarian mission carried out by helicopter.

Rann has become a place synonymous with the horrors of the insurgency. In July 2017, the air force accidently bombed a camp for internally displaced people.

Eight months later, two aid workers, Hauwa Mohammed Liman and Saifura Khorsa were kidnapped during a Boko Haram raid on the town. They were both killed by Boko Haram.

“We have dispatched our director of forests Peter Ayuba, to confirm the sighting and to carry out an impact assessment,” Wanori confirmed.

It is a risky mission for a Christian to undertake in an area where Islamic insurgents roam, especially on Christmas Day, but it indicates that the Borno State Government is committed to protecting the elephants.

On Tuesday, authorities in Vietnam seized over two tonnes of ivory and pangolin scales hidden inside wooden boxes shipped from Nigeria.

The UN estimates that over one million people are malnourished in North-east Nigeria due to insecurity. Elephant meat was traditionally part of people’s diets so the race is on to save the recently sighted herd from a hungry population.

Beef is now more sought after than elephant meat by those who can afford it. But cattle rearing has a detrimental effect on elephant habitats that has contributed to elephants moving across the border to Cameroon, which is far less populated than Nigeria.

Borno State Government yesterday said the sighting on about 300 elephants in the state was a sign that peace had returned.

The State’s Commissioner of Environment, Engr. Kabir Wanori said the sighting of elephants was not strange to the state.

He noted that it was the Boko Haram crisis that made the elephants to stop the annual migration through Borno from Cameroon to somewhere in Bauchi.

He said sighting them now indicates that something which has kept them away was no longer there, and it is known that they were kept away by the Boko Haram who inhabited the Sambisa Forest.

He said on hearing the story of the sighting of the elephant in Rann, in Kala-Balge local government of the state, he set up a committee to investigate.

He added that they reported back to him that about 300 elephants were seen and they all migrated from Cameroon.

He said: “As I am speaking to you, they are all in a town not too far away from Rann near a body of water.

“As a government, we are still considering what to do with them. I have asked the professionals in the Wildlife Department of the Ministry to come out with a position of what should be done.

“I am still waiting for the report and this will inform government decision about them. But as at 5 p.m. today (Friday) they were still sighted some kilometres away from Rann.”

He added that the sighting of the herd of elephants brought joy to the people of Borno and “we are seeing it with the eye that peace has definitely returned back to the state.”