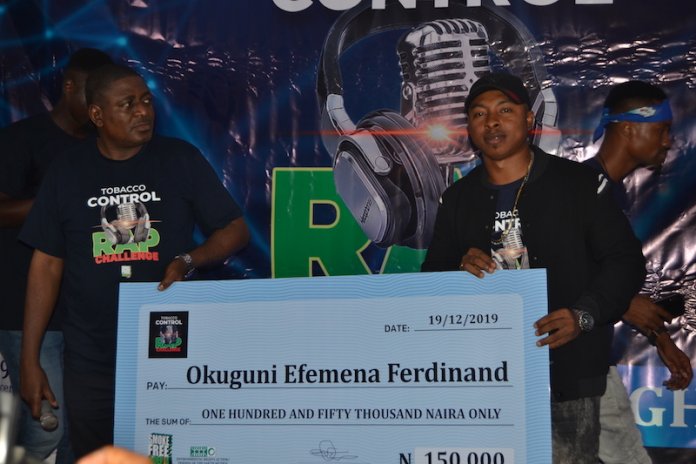 Sunday Ehigiator
The grand finale of the Environmental Rights Action/Friends of the Earth Nigeria (ERA/FoEN) ‘Tobacco Control Rap Challenge’ came to a close with five winners emerging as finalists.

At the glamorous ceremony held in Lagos State, and well attended by tobacco control advocates and youth groups, saw Okuguni Ferdinand and Bennet Etido emerge first and second positions respectively, basking home with the sum of N150,000 and N100,000 apiece; while Adeogun Yinka, Atiku Giddy, and Udeng Bennet, finished third, fourth and fifth respectively, and went home with N50,000 each.

The competition which started on September 2, 2019 was targeted at creating awareness on the enforcement of the National Tobacco Control (NTC) Act 2015 and Tobacco Regulations to the youth through a music competition tagged #TCRapChallenge and #EnforceTCRegNow.

“The TCRap Challenge is a reflection of ERA/FoEN belief that the youth are crucial in tobacco control. From the diversity of the winners, it can be concluded that Nigerian youth yearn for effective regulation of tobacco products and reject tobacco industry attempts to conscript them into the smoking habit.”

He also revealed that the five winners would likewise get a studio sessions, tobacco control branded T-shirts, phones and cash prizes, among other gifts.

In a brief comment, ERA/FoEN Deputy Executive Director, Akinbode Oluwafemi said, “We are happy that the youth targeted by tobacco companies have demonstrated through music that despite the tobacco industry strategies to grow replacement smokers, they can make the right choices.”

According to him, “the TC Rap Challenge received nearly 400 entries and participants on ERA/FoEN social media platforms. The platforms recorded over one million reach on Facebook, and over 500,000 reach on Instagram.

“During the campaign, the hashtag #TCRapChallenge and #EnforceTCRegNow trended two times within two weeks of commencement, got over 1,180 tweets, 480 retweets and 550 replies during the campaign”, he said.