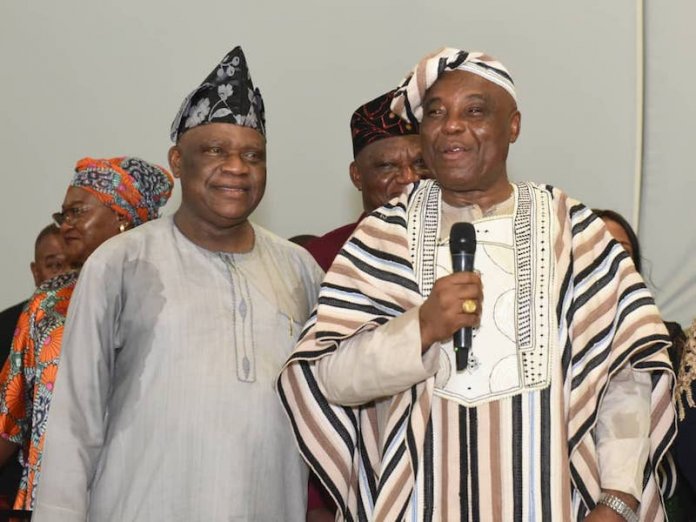 By Christopher Ebuetse
Media mogul and Politician High Chief Dr. Raymond Dokpesi, visited Monrovia, the Republic of Liberia where he was bestowed with a title “Zuoje”. This was to express appreciation over the enormous support and assistance that Dr. Raymond had shown one of their own, Ambassador Kanvee Adams.

The title “Zuoje”, when translated in English means, “thank you”. The Liberians conveyed their thanks to Dr. Raymond Dokpesi, founder of Daar Communications Plc, for his exemplary leadership, support and assistance in the piloting of Ambassador Kanvee Adams to greater heights in music in Africa.

The title “Zuoje” was conferred on him before a marmot crowd in one of the biggest concert organised in honour of Kanvee Adams by the Musicians Association of Liberia. The conferment of “Zuoje“ was done by eminent personalities from Liberia led by Nyonblee Katanga-Lawrence, the only female Senator and leader of Liberty Party, Liberia.

During the conferment, the crowd gave a standing ovation while shouting “Zuoje “. It was an interesting moment to behold in the history of entertainment in Liberia.
Dokpesi was accompanied by a large delegation from the Federal Republic of Nigeria, amongst whom were the Executive Producer, Afrima, Mr Mike Dada, Mr Olisa Adibua, Afrima jurist, West Africa, Dr Supo Ali Balogun, and Otunba Doyin Ogungbe. They all stormed Monrovia the home town of the legendary singer and gospel crony, Ambassador Kanvee Adams, to formally present to the Government and people of Liberia two Afrima Awards.

It is noteworthy that Kanvee Adams, who is currently under the Daar Music Global label was nominated this year for three categories of awards at the 6th Afrima Awards held in Nigeria. The three awards are namely: The Best Female Artist, West Africa, Best Artist Inspirational Duo or Group in Africa and Best Song Writer in Africa.

Ambassador Kanvee Adams won two of those Awards and was a close second in the Best Female Artist of the year in West Africa.
Winning two Awards in Afrima is not an ordinary feat. Kanvee became the first in history of the Republic of Liberia to win the most highly rated African music Award.

Chief Dokpesi on arrival at Liberia international airport had a grand reception and was welcomed by Liberians in great numbers. They were also there to catch a glimpse of one of their own that had been catapulted into the global stage of music.

Before her visit to Monrovia, during a reception, Kanvee Adams along with the Chairman and management of Daar Communications Plc, Chief Raymond Dokpesi Jr, presented her awards to the Ambassador of Liberia to Nigeria, Professor Hassan Canteh.

Dr Raymond Dokpesi and entourage were received by government officials of Liberia, representatives of the ambassador of Nigeria to Liberia, a large crowd from Liberia and Nigerian communities and Musician Association of Liberia amidst pump and pageantry.

Supporters and friends of Ambassador Kanvee who came to the Airport said the role of Dr Raymond Dokpesi in the development of music in Liberia was worth acknowledging and celebrating. They said that the history of Liberia will be kind to Dokpesi who took upon himself the duty to expose and bring to the limelight one of their finest Singers. Some of the musicians who spoke stated that Music in Liberia was still at the lowest ebb, froth with a lot of challenges and for a Liberian winning the continental award was a welcomed development.

They thanked Dokpesi and stated that he belonged to the very few in Africa who would cross borders to create a turnaround in the fortunes of an Artist from a different Country.
In a thanksgiving service at St Kizito Catholic Church in Monrovia, the officiating priest Rev. Johnson elegizede Dokpesi, for the great assistance to Kanvee Adams. In response, high Chief Dr Raymond Dokpesi, thanked the officiating priest and the congregation admonishing them not to embrace crisis but work at all times to ensure peace in Liberia.

High Chief Raymond Dokpesi and his team visited and presented the Afrima Awards to His Excellency, Hon. Chief Dr Jewel Haward-Taylor, the Vice President of the Republic of Liberia and the Nigeria Ambassador to Liberia, His Excellency, Dimka G James who reiterated that the assistance Dokpesi has rendered to the Liberian female Artist goes a long way to re-emphasize the big brotherly role that the Nigerian government has always played to Liberia ever since the civil war ended 14years ago. On her part, the Vice President of Liberia was happy to be associated with such a very laudable achievement from their citizen.

Hon Daniel Gayou Acting Honourable Minister for Information, Cultural Affaires and Tourism, thanked High Chief Dokpesi for impacting the lives of their people. He noted that the Afrima Awards would go a long way to improve the arts of their people.

Hon Eugene Fahngon Deputy Minister for Public Affairs, Ministry of Information, Cultural Affaires and Tourism also spoke on the efforts of Dokpesi and stressed the facts that Liberians are grateful to him.

Additionally, Ambassador Kanvee noted that her coming to Liberia was to present her Awards to the people and government of Liberia and to honour the grand reception.
Dokpesi while on courtesy visit to the Ministry of Information appealed to the government of Liberia to find ways of honouring those that have worked hard to bring recognition and honour to the Country. He stated that if the current President, His Excellency, George Weah was from Nigeria, in his days as a great footballer, he would have been given a national honour. He noted that one of the ways to stimulate growth and progress is to bestow honours on those who worked to make their Country great. Dokpesi went further to request from the government of Liberia to emulate Nigeria and other African Countries who celebrate those who have made their Countries proud by bestowing national honours and recognitions.

Dokpesi also in other fora and at the concert in honour of Kanvee Adams reiterated the need for the people to live in Peace, stating that crisis and conflict are not the road to solving challenges. He stated that there is no country in the world that does not have challenges and those leaders should find ways of solving the numerous challenges plaguing their Countries especially those within the African continent.

Dokpesi noted that he would continue to reach out and assist talented Africans like he has always done as his media conglomerate is named, having the entire Africa in mind. That is why his media outfit is called Africa Independent Television,(AIT). Dokpesi noted that for a better part of his life, he has worked to project Africa to the world in a positive manner.
The former Vice President of Liberia, His Excellency Joeseph Boakai said that the success of Ambassador Kanvee Adams in Afrima is a sign of good things for young and talented artists. He thanked Dokpesi on behalf of the Liberia people and prayed that both Countries continue to have a seamless relationship.

Other important personalities that spoke included Nyonblee Karnga-Lawrence, the only female Senator and Leader of Liberty Party, Liberia.

In his home Country, Dr Dokpesi remains an enigma of some sort, he is the pathfinder of the Entertainment Industry, a foremost Nigerian who used his media conglomerate the largest private broadcasting network in Africa to expose and export the cultural ideals of the blacks to the outside world. It is worthy to reflect on the massive support and assistance he gave to the growth of the entertainment industry in Nigeria. The legendary 2face Idibia, Daddy Shoky, Idris Kareem Abubakar, and many more Artists in the earlier struggle to build the entertainment industry have always spoken of the immense role of Dr Dokpesi in the development of the music industry in Nigeria and Africa.

*Ebuetse is a media practitioner with AIT, Lagos.