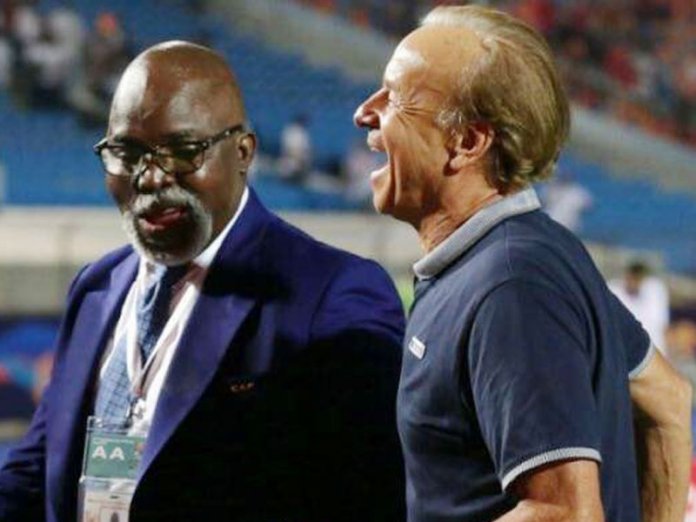 As Nigerians look forward to the New Year with better performances from the country’s national football teams, the Nigeria Football Federation (NFF) has revealed plans to renew the contract of Super Eagles Head Coach, Gernot Rohr for another term.

The Franco-German who was contracted in 2016 for an initial two-year contract has been threatening to open talks with other countries if the NFF fails to speak on a new deal for him before the end of next month.

But yesterday, President of the NFF, Amaju Pinnick said in Lagos that Rohr’s contract will be renewed but with stringent conditions that includes him staying in Nigeria.

“We are going to renew Rohr’s contract with Nigeria before it expires. Unlike the previous contract, we are going to insist now that he stays in Nigeria with accommodation for him in which ever city he prefers between Abuja and Lagos,” revealed the NFF chief during a media parley in Lagos yesterday.

Part of Rohr’s new contract will be to have a harmonious working relationship with the federation’s Technical Committee.

“He should be ready to work with the Technical Committee. We don’t want repeat of some of the things that created problems to happen again as we aim to move the game forward in the New Year.”

Although, there have been subtle move by the gaffer to get the Sports Minister, Sunday Dare, to intervene on his contract matter, it is believed that the minister made it known to him that only the NFF have the right to decide whether to keep him or ask him to take a work from the job.

On the position of the Sports Minister not happy with the state of the game in the out going year, Pinnick said the minister has every right to speak on our performance as the head of sports in the country.

“Don’t forget the minister is the chief sports officer of the country. We don’t feel bad he spoke his mind on the state of football in Nigeria. We believe his intervention is bound to be a wake up call for us and the players,” stressed Pinnick who is looking forward to the New Year with enthusiasm.

“Year 2020 is full of so much promise for Nigeria football. We have the qualifiers for both the AFCON 2021 and the World Cup 2022. We need to get our acts right from the first kick of the ball in the New Year because there are no longer minnows in African football.

As part of the plans to put the administration of the game in proper perspective in the 2020, Pinnick hinted of plans for the NFF to relocate to the Sunday Dankaro House after years at the Glass House the federation has shared with the Federal Road Safety Commission.

“I want to assure you that the NFF secretariat will relocate to the Sunday Dankaro House before the end of January.”

He also hinted that cadet players that have contracts with football agents will no longer be tolerated in the Golden Eaglets.

Nigeria’s cadet teams (U-17, U-20 and U-23), floundered in continental tournaments in the out-going year, rubbishing the image the country has made over the years as a super-power in youth football.

To stem the influence of football agents in the national teams, the NFF has now warned that any player that has any contract will no longer be allowed to play for Eaglets.

“We have now realized the disruptive influence of these football agents to our preparations for major tournaments as was seen in the out going year. Henceforth, any player who has any link to any agent will be shut out of our team,” Pinnick concluded.