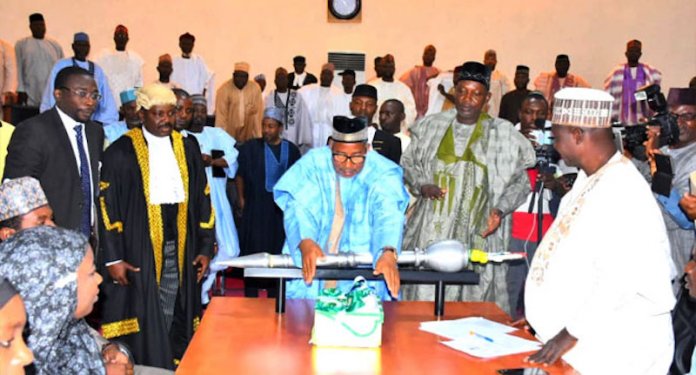 Bauchi State Governor, Senator Bala Abdulkadir Mohammed, has signed the proposed budget of N167,215,807,500 for the 2020 fiscal year following its passage by the state House of Assembly earlier in the day.

While signing the budget at the Executive Chamber of Government House in Bauchi yestersday, the governor lauded the lawmakers for the speedy passage of the budget into law, saying this was an indication of their patriotism and statesmanship.

Mohammed added that the passage of the 2020 Appropriation Bill into law by the Assembly just two weeks after its submission by the executive has further deepened the relationship between the two arms of government.

The governor, who was in company of the members of Bauchi State House of Assembly led by the Speaker, Hon. Abubakar Suleiman, and some members of the executive, praised the cordial relationship between the executive and the legislature in the state that resulted in the smooth passage of the bill.

He urged all elected members to set aside their party and political differences and look at Bauchi State as a project and do things in a manner that would add value to the state and leave it better than they met it at the end of their tenure.

He recalled that the relationship between the legislature and the executive in the state at the beginning was shaky at the onset “but today Bauchi has set the pace in the area of cordial relationship the two arms of the government.”

Speaking on the speedy passage, the governor said: “What the members have done is to give us all the required impetus to do our job constitutionally.”

Mohammed explained that the 2020 budget tagged “Budget of Hope” was not just an economic issue, but based on issues affecting the state.”“I am happy that you had done justice to the appropriation bill. You have shown that you are the bosses. You have looked at all shades for the betterment of all the constituencies and the micro-constituencies and the state in general,” he said.

The governor promised that based on the cordial relationship that facilitated smooth passage of the Appropriation Bill into law, the executive on its part “would follow the budget assiduously and carry members along.”

He, therefore, urged his commissioners to provide enabling environment for the Assembly members to perform their constitutional oversight functions effectively.

He lamented that Bauchi State lagged behind in the areas of health and education, assuring that resources would be judiciously deployed to restore hope and better living for the people.

Earlier, the Speaker explained that the governor presented the proposed 2020 budget to the Assembly two weeks ago, pointing out that they deemed it proper to pass it into law after scrutinising it.

Suleiman, however, said although the Assembly made some adjustments in the budget, the final figures remained the same.