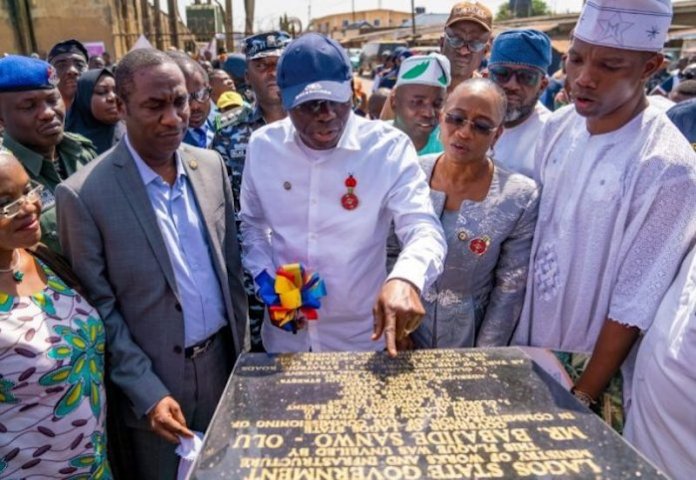 Speaking at the inauguration of the roads yesterday, Sanwo-Olu said: “Good road network facilitates effective management of traffic and transport, thereby boosting the socio-economic activities of the state; it reduces traffic induced health challenges and travel time to access health facilities as well as educational institutions.”

According to him, the provision of road infrastructure is central to the delivery of the THEMES agenda of his administration, adding that “it is common knowledge that tourism and entertainment are better appreciated and attract more people when access to the venue is relatively stress-free.”

The governor said Ojokoro LCDA is a strategic settlement with a fast growing population and huge need for infrastructural renewal, and that the 31 network of roads inaugurated was specifically executed to offer traffic relief to the rapidly developing area, improve the socio-economic activities and connectivity within the axis and its neighbouring Ogun State.

“The completion of the network of roads will also complement other completed roads within Ojokoro LCDA,” stressed.

The governor said drainages were also done with the roads which he said would help to de-flood the environment while the streetlights will complement the security architecture of the state.

“To this extent, the prioritisation of infrastructure, especially road, rail and water transportation facilities, is predicated on its multiplier effect and direct relationship to other pillars of the THEMES agenda.

“The network of roads will help unlock perennial gridlock on Lagos-Abeokuta expressway with resultant reduction in travel time along the corridor. Prior to embarking on these projects, traffic on the road had grown tremendously considering the high rate of the population growth and its attendant vehicular density,” Sanwolu said.

He promised that despite the various commitments of his government, “we shall find the most effective ways to ensure that this axis gets due attention. We will do more roads and many other projects in other sectors for the benefit of Ojokoro and Lagos in general.”