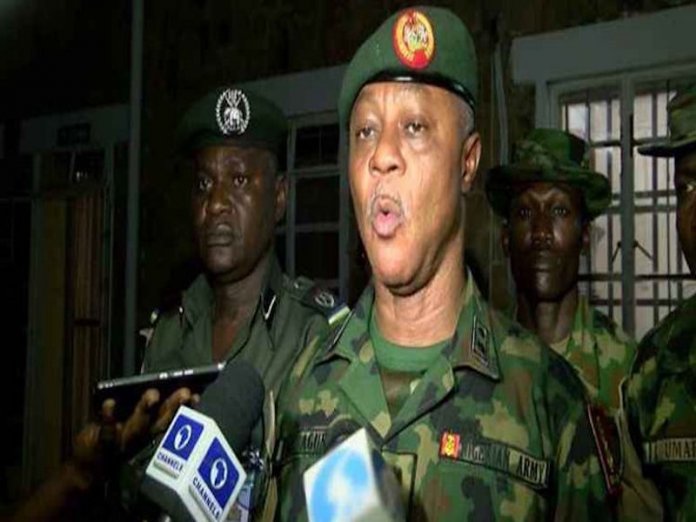 Commander of the Military Operation Safe Haven, Maj. Gen. Augustine Agundu, has asked farmers and herders in southern part of Kaduna State to surrender illegal weapons in their possession or risk being arrested, accusing retired security officers of fueling crisis in the area.

He also alleged some retired security officers of southern Kaduna extraction were responsible for promotion of violence in the area but assured they will soon be nabbed.

The Commander, who stated these yesterday in Kafanchan during Kaduna State government and Defence Headquarters’ Operation Safe Haven’s meeting with stakeholders in southern Kaduna, said the farmers and herders must stop their old practice of taking laws into their hands.

Agundu, who spoke passionately on why Kaduna people must live in peace with one another, urged residents to identify and report criminal elements in their communities to security agencies for prompt action.

“Farmers and herders carrying illegal fire arms must surrender them to the nearest security post to avoid arrest.

“Farmers and herders must always report any grievances to security especially the military rather than taking laws into their own hands. This will not be tolerated.

“As farmer you don’t need to kill another person who destroys your farmland because we cannot buy life. We must stop stealing cows. I also advise the herdsmen to stop using children to rear cows and night rearing. Let us isolate the bad ones, the criminals that cut across all the tribes. We must be tolerant of each other and grow understanding,” he urged.

The Commander, who earlier visited the Chief of Kagoro and Emir of Jama’a at their respective palaces, called for tolerance among residents and warned trouble makers to leave Southern Kaduna or face the full wrath of the law.

He said: “What we want from you is to identify the bad ones living in your communities and report to us the security for prompt action for peace to reign. No problem without solution, we must hold our communities together to live in peace.

“Let’s appeal to our conscience, people who are giving us problem are only few. The land that belongs to all of us is the six feet’s grave, at the end of day nobody owns any land.

“The people who are fueling crisis are not from here, they are in cities. We must say no to violence. When people want to cause crisis, they sow the seed of discord among people.

“There are serving and retired security officers in this state and many are the ones promoting violence. We will get you, it is just a matter of time.

“I am appealing to you all, to give us useful information to pick up the few bad ones living among us for peace. Our men are ready to bring peace,” he said.

Speaking with the traditional rulers, the Commander said: “We have the responsibility to always tell truth to the people. The few individuals are the ones propagating hatred to cause havoc in our communities today. Enough of trouble, some people are keeping fire arms especially in Plateau state and that is what we are doing now in Plateau by moping the illegal fire arms”

“My appeal to you traditional rulers is to isolate the bad ones, the enemies are living within us, identify them to foster peace in Southern Kaduna. If we keep the bad ones among us, peace will delay. Some trouble makers are in cities, they only come and instigate problem. We must go back to old days where we all lived in peace with one another. Let’s respect each other,” Agundu said.