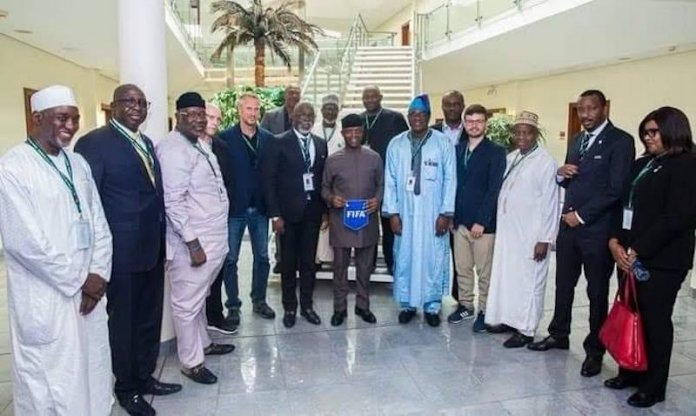 The Nigeria Football Federation (NFF) is set to put the country forward as a potential host for next year’s continental showpiece event, the African Women Nations Cup tournament (AWCON).

Early last month, South Africa, another emerging power-house in women football, turned down an approach to step in as emergency hosts of the 2020 tournament after Congo-Brazzaville pulled out of the hosting of the 12-team gathering in July.

With the Confederation of African Football (CAF) now in a race against time to find a country to hold the tournament, Opera News reports that Nigeria’s football governing body’s board has commenced work to see if a bid is feasible.

Nigeria failed with a bid – fronted by NFF President Amaju Pinnick – to host the 2020 FIFA Women’s Under-20 World Cup.

Costa Rica and Panama were instead announced as joint hosts by FIFA, after Pinnick admitted challenges with the West African country’s inability to fulfill all requirements proposed by the world governing body FIFA at short notice.

The NFF has been on a collision course with Sports Minister, Sunday Dare, whose support they would need to secure government guarantee.

The body was strongly criticised by the Sports Minister during its Annual General Meeting (AGM) last week in Edo State over corruption in the governing of football as well as the slide in the country’s fortunes in the beautiful game.

“In the eyes of the Nigerian public, the perception that the NFF and Nigerian football is corrupt is rife. I have had cause in the past to speak on how perception is everything and the perception around the NFF is not one that will court new partners and sponsors for the federation,” the minister stated in his welcome address.

“Even, though, many of the allegations have not been proven, the atmosphere around football is polluted on account of the negative perception of corruption and we must move quickly to sanitise this.”

With Nigeria suffering through an economic crisis, strong criticism from a section of the country’s socio-political commentators and analysts beset the botched bid to stage the women’s global youth event.

Despite the criticism, the Under-20 World Cup project received strong backing from the Nigerian government with Vice-President Yemi Osinbajo insisting they were fully behind the plans.

“The Government of Nigeria guarantees to back the bid 100 per cent,” Osinbajo said during a FIFA inspection visit in August.

“We are actually excited with the prospect of hosting the FIFA Under-20 Women’s World Cup in 2020.

“For us, football is a unifying force. Government interest in hosting is beyond commercial; football is a measure of unity and well-being of our people as diverse as we are.”

The last major tournament played in Nigeria was the 2009 FIFA Under-17 World Cup, 10 years after the country hosted the Under-20 version.

However, defending champions Nigeria have previously hosted and won the AWCON in 1998, 2002 and 2006.

It will now decide whether to rescue the continent’s women showpiece event one more time, with games potentially staged in Lagos, Benin City, Asaba and Uyo.

There has been no dates set for the 2020 women’s Africa Cup of Nations but it is usually held in the second half of the year. The last final – won by Nigeria – was in Ghana.

Six nations have hosted the tournament since it switched to the recent format in 1998, Nigeria and South Africa have both staged it thrice, Equatorial Guinea (twice), Namibia, Cameroon and Ghana.

Nigeria’s women are the most successful national team in African football history with NINE continental titles – two more than Egypt’s men’s team. The Super Falcons are the only African team to have played in all of the Women’s eight World Cup tournaments since 1991 but they have failed to translate their continental dominance on the world stage.

Their best performance came when reaching the quarter-finals in 1999 and 20 years later when they exit in the second round of the 2019 tournament in France.