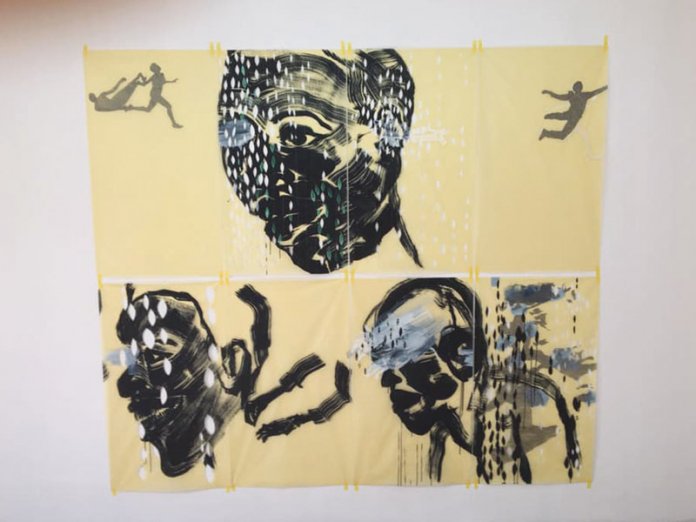 Movement is a way of life on the continent, but no one uses the term diaspora to describe African migrant groups who live in a foreign land within the continent.

So in the group exhibition titled Diaspora At Home, the Center for Contemporary Art (CCA) and KADIST Paris engages the public in discussions on mobility within Africa.

Initiated by curators Iheanyi Onwuegbucha(CCA) and Sophie Potelon(KADIST), the project, which consists of two exhibitions in Lagos, Nigeria and Paris, France, includes a programme of artist residencies in Lagos, an exhibition and a series of artist talks and conversations at CCA, Lagos.

Abraham Oghobase in interpreting the theme of the exhibition combines text, photographs and a sculptural installation while using the materiality of photography to explore movement and states of transitions. He evokes longing, loss, nostalgia, homesickness and even anger by merging a collage of pictures taken in Botswana and Ghana over the stencils of selected lyrics from two songs by the father of South African jazz, Hugh Masekela: “Stimela” and “Been Such A Long Time Gone”.

French-Palestine artist, Bady Dalloul who takes historical facts in forms of maps, images and video to create fiction interviewed members of the Lebanese community in Lagos, Nigeria and created a “Bound Together”, three different Nigerian dresses made from hand-printed fabrics in the form of commemorative textiles to narrate the stories of these Middle Eastern families he met in Lagos, who are not able to return to their country because they have found a means of survival in a new land.

French artist, Chloe Quenum render works with glass, metals, textiles and concrete, and with processes of staining, transparency and casting, so she was invited to activate her installation Châtaignes (Chestnuts) creating a landscape by scattering several fruits as if they have fallen from imaginary trees.

The “fruits” are wrapped in clay with traces of an ochre-tinted powder on the floor of the exhibition space. The fruits are protected by clay, which is normally used to protect perishable things. In the installations, she questions the origins of the fruits but also tries to recall the colonial history behind the global commerce of the items.

Cameroonian artist, Em’kal Eyongakpa takes advantage of CCA’s willingness to convert the library to a place that goes beyond the books. The installation is a combination of field recordings of sounds of water and wind alternating with sound excerpts from the ongoing conflict in Southern Cameroon. The silence of the library is literally disturbed by his sonic composition.

Laura Henno a French photographer and filmmaker, whose constant theme of the rise of secret migration and the dangers involved, is seen again in the documentary she shows at the exhibition, titled “Koropa”. It shows the relationship between a fisherman turned smuggler and his apprentice- a child making his way across dangerous seas for the first time.

Tunisian artists, Nidhal Chamekh brings part of his ongoing project around the visual memories of the vanquished and what we from them in contemporary times. In the series of drawings titled “Nos Visages” (Our faces) is a series of montages drawn from portraits of soldiers of the French colonial empire. Due to the Nidhal’s inability to put a name on all these anonymous beings, he doubles the faces by superimposing contradictory halves on top of each other.

Rahama Gambo leaves her camera behind to create documentary storytelling that encompasses drawing, film, sculpture and installation and is called “Nest Works and Wander-lines”.

She uses metaphors to explore the existence of space and time through movement, using weaverbirds and termites and the moving pathways they make in the sky and on the ground.

Wura Natasha Ogunji presents a new body of work for the exhibition of cutout figures on architectural tracing paper, in a work titled “Fixed Things and Flying Things” she reimagines the idea and struggles of living at home in the context of the human appetite of living in constant search of greener pastures.

Diaspora At Home helps the viewers as individuals to redefine what they call “home” – could it be in another African country outside their place of birth and origin, or they have to migrate across the sea to foreign lands.

In 2020, the exhibition will travel to Paris to be shown at KADIST as part of the programmes attesting to the French government’s support for Africa.