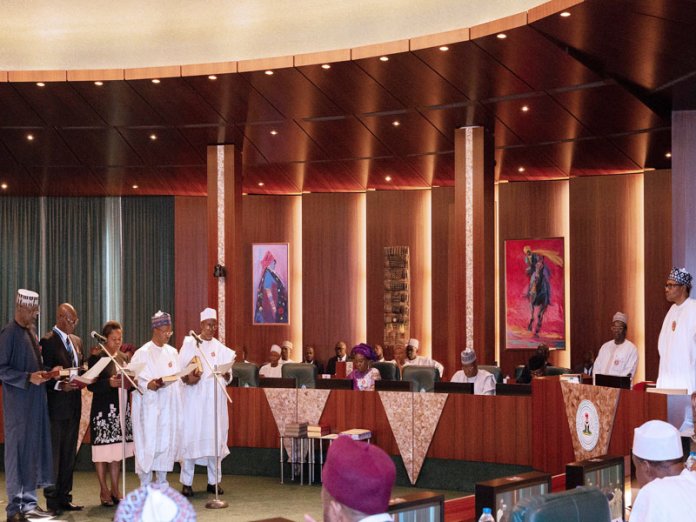 President Muhammadu Buhari has administered oath of office on nine federal permanent secretaries, including the wife of the Minister of Labour and Employment, Dr. Chris Ngige.

The permanent secretaries were sworn in wednesday in two batches of five and four before the commencement of the federal executive council (FEC) meeting at the presidential Villa, Abuja.

President Buhari has approved the deployment and re- deployment of the nine permanent secretaries and 10 others.

Meanwhile, President Buhari has also approved the deployment and re-deployment of the nine permanent secretaries and 10 others.

The circular conveying the redeployment was signed by the Acting Head of the Civil Service of the Federation, Dr.Folasade Yemi -Esan. Yemi- Esan stated in the circular that the handing /taking-over processes were to be completed immediately.

A statement issued yesterday by the Director (Media and Public Relations), Office of the Head of the Civil Service of the Federation, Mrs Olawunmi Ogunmosunle, listed the affected permanent secretaries and their newly approved designations.

The circular further stated that the redeployment of the permanent secretaries of Finance (Special Duties) and Aviation is to be completed on or before January 4, 2020 , while Environment and Budget and National Planning on or before February 19, 2020.