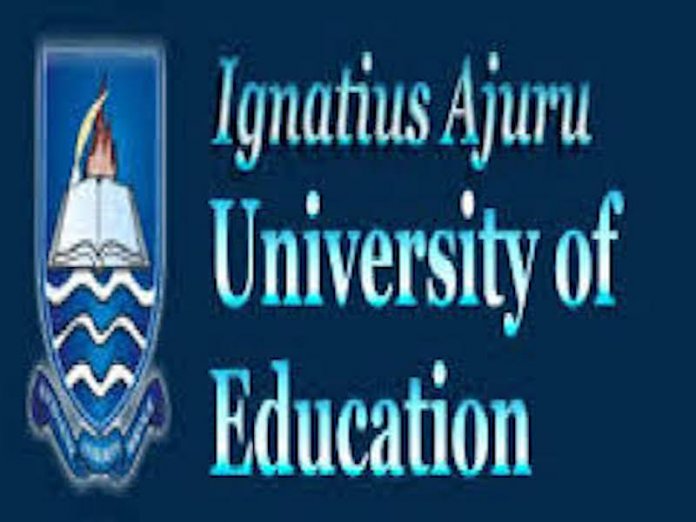 It was jubilation all the way at the Rivers State Government-owned Ignatius Ajuru University of Education (IAUE), Rumuolumeni, Port Harcourt last week as the founder and Presiding Pastor of Salvation Ministries, Port Harcourt, Pastor David Ibiyeomie, formally presented a N320 million female hostel built by the church to the university management.

Ibiyeomie also presented to the public and dedicated a building in the Old Port Harcourt Township for free primary education.
The students in their hundreds, lined the streets of the university campus at Rumuolumeni to welcome the pastor whom they described as a messiah who came to salvage the institution from it numerous challenges.

As the pastor and his entourage drove to the project sites, the shouts of ‘Our Own Pastor’, ‘Our Messiah’, etc rented the air as the students jostled for vantage position to get a glance of the man who has revotionalised hostel accommodation in the university.

While the students poured encomiums on the pastor and his ministry, the Vice- Chancellor, Prof. Ozo-Mekuri Ndimele, confessed to “stealing” part of the N320 million provided by the church to build and provide other projects and facilities for the university.

Established in 1971 as Rivers State College of Education to address the problem of acute shortage of trained teachers for the state’s rapidly rising post-primary education, the institution had passed through several structures. It became a university and christened Ignatius Ajuru University of Education in 2009 following the passage by the State House of Assembly on October 15, 2009 and the signing into law the University of Education Law No. 8 of 2009 by the state government.

While the institution had changed in structure, it has faced a perennial problem of facilities especially accommodation and office spaces. Thus it was a relief when during the convocation ceremony of the university in 2018, Ibiyeomie promised to assist the institution in the provision of accommodation.

It did not make much meaning to the university authorities then as, perhaps, such promise had been made by others in time past.
The vice-chancellor admitted that much when he said during the presentation that he was surprised when he was called by Ibiyeomie to come to his office.

Ndimele said: “You will recall that you were here on September 1, 2018 and made a promise to us that you will help build us a hostel. Soon after that you called me to bring to you the drawing. That we did. Soon after that you called me to your office and asked me how much it will cost to build the hostel. I told you I am not a builder and that I will take that drawing to the Estate Department to get the cost. That we did and came back to you with a bill of N320 million. You so approved for us.

Only God knew how I got home after that approval because I was shivering. And you said: “I want you to deliver the job for me. Poor teacher like me. I was frightened. I have never seen N320 million before all my life. So, we came back and you called us back after a few days and raised a cheque of N100 million. I informed our dear Governor Nyesom Wike. I informed my council chairman that you said I should help build this for you: not on contract.”

He said he quickly put a committee together, with him as chairman and moved his office to the site of the hostel to ensure that the project did not fail.
The vice-chancellor gave an account of how the university officials “stole” from the pastor in the interest of the institution.

He said: “As we began to build, by the first N100 million, we had gotten to second decking of the building. We did not come to you to give a report but surprisingly you called me again and said we should come and take another N100 million, making N200 million.

“I told my colleagues that we would steal this money to help the university. So, by the time we completed the second decking we still had some change. I know pastor will forgive me if I confess my sins to him. Because the budget was made by Works (Department’s Head) based on what he knows as a builder. So I became a “bargainer.” Everybody who came to supply sand, we bargained with them and even frightened them sometimes to beat down the cost.

“By the time we had N200 million, I told my colleagues: We have a PG Hostel abandoned here on campus, what do we do? I told them: Let us steal some money from here and complete it.
“We had to complete it, put chairs, beds, wardrobes, foams and everything in it, and a common room, camera and solar power. Complete hostel.

“We still had money left. So we had to settle the Chief Security Officer (CSO) on campus. He had a small office. We built for him a three-bedroom security office with a conference room furnished with your money.”

Other projects he said the university applied the pastor’s money include power line, solar energy and access road to the hostel.
“If you look at the right hand side as you are going to the building, you will see a vast land, over 40 plots of land cleared with your money.

“We did these projects and many more things for the school with your money, that is why I said we stole. Now that we have confessed our sins, I hope we are forgiven,” he said, amidst laughter.

The President of the Students’ Union Government (SUG), Mmah Dominic Dumbari, on behalf of the students, also thanked Ibiyeomie and the church for the gesture.

He said: “We are particularly and specially thankful to God Almighty for bestowing on us the grace to be alive and to meet you once again in sincere gratitude and appreciation for your numerous contributions to the school.

“We are indeed grateful to you for your support to the advancement of the university in the provision of a world class female hostel and other numerous contributions the school has benefited from your benevolence.”

But like Oliver Twist, Dumbari, asked that the pastor should do more for the institution.
“We still solicit your good assistance and support to the school in whatever measure particularly the provision of comfortable hostel accommodation for our male students who have only one hostel, among other challenges the university still faces,” he said.

A lecturer who would not wish to be named, said: “He is indeed a sponsor of education. We lack words to say how we feel. We were once rejected but now the toast of the state.”
Presenting the hostel to the management and students of the university, Ibiyeomie said he was motivated by the urge to be a blessing to the society.

“Life is not about duration but about contributions. No one should leave this world without contributing,” he said.
He added that people do not need to wait for other people to make demands on them before reaching out to society.

He expressed delight at what the institution had used the donation to achieve for the students and promised to do more.
While presenting the free primary school building at Old Township, Ibiyeomie said it was the church’s contribution to the growth of education in the society.

He told journalists: “This is actually a building we gave for free primary school. It is our own contribution to education in the society. The church will be in charge of the teachers and everything. We run the school for free.”

He stated that the primary school which would take off next academic session as a tuition-free institution, would be open to the less-privileged, irrespective of their religion or denomination.

With the response of on-lookers who gathered around the building, the donation will change the perception that religious organisations are doing enough in affecting the society in other ways except in wooing people to their fold.
Like Mr Johnson Adele, a taxi driver, said, “God go bless this man for thinking about the common man.”