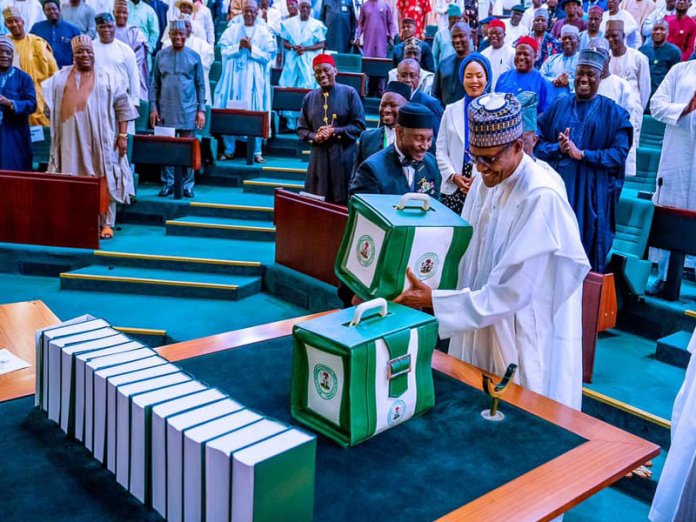 The presidency has set up a committee to scrutinise the 2020 Appropriation Bill passed by the National Assembly, charging it to look critically into the differentials between the figure submitted by President Muhammadu Buhari and the one approved by the legislature, and advise the president on assent, THISDAY learnt last night.

The National Assembly had on December 5, passed N10.59 trillion, N264 billion more than the N10.33 trillion estimates submitted for 2020 by the president in October.
This differential, a reliable source told THISDAY, would be thoroughly scrutinised by the committee, before presidential assent.

The budget was last Thursday transmitted to the president for assent.
Although there is pressure on the president to give assent because of the administration’s desire to return to the January-to-December fiscal calendar, Buhari is said to be insistent on ensuring that his core financial objectives are not distorted by the fresh insertions, which are already causing disquiet in the Senate.

“The president wants to ensure that the projects inserted conform to his overall fiscal objectives,” a source told THISDAY, saying the exercise would not necessarily lead to the defeat of the desire to return to January-to-December budget cycle.

It was gathered that the committee would soon look at the budget document and advise the president accordingly on the next line of action.
THISDAY learnt that it was after the committee might have completed its work that the issue of whether Buhari would assent to the bill or not could be decided.

“All I know is that with the presidency is now in possession of the approved Appropriation Bill, the onus is on the executive to speed up action on the issue of assenting to the bill and I know that should be before long because I know both the legislature and the executive are on the same page about returning the budget cycle to January-to-December effective 2020 fiscal year,” one of the sources stated.

Meanwhile, senators are warming up for a fight with the leadership of the Senate over the distribution of some capital projects in the 2020 Budget, passed penultimate Thursday by the National Assembly.
Sources told THISDAY at the weekend that the projects were outside the N100 billion constituency projects for lawmakers in the two chambers of the National Assembly that the executive conceded to them.

It was learnt that the cost of the inserted projects, which was not originally in the N10. 33 billion appropriation bill the president presented to the National Assembly on October 8, formed part of the reasons the National Assembly jacked up the budget size by N264 billion before passing it on December 5.
Some senators across party lines, who spoke on condition of anonymity at the weekend stated that apart from the N100 billion voted for constituency projects for the National Assembly members, the leadership of the two chambers allegedly inserted some projects in the senatorial districts of some senators and constituencies of some House of Representatives members under various headings in some ministries and agencies.

The aggrieved senators accused the leadership of the National Assembly of making their favourites beneficiaries while leaving out others.
The sources identified ministries according to a copy of the budget breakdown seen by THISDAY where the projects are inserted for execution include Human Affairs, Disaster Management and Social Development; Special Duties and Intergovernmental Affairs; Agriculture and Rural Development; Communications; Defence and Open University.

A breakdown of the four ‘legislative’ projects highlighted under the Ministry of Humanitarian Affairs, Disaster Management and Social Development showed that N700 million was earmarked for installation of all-in-one solar powered street lights across the eight local government areas of Delta Central Senatorial District which the Deputy Senate President, Senator Ovie Omo-Agege represents; N500 million for grants to youth and women in Internally Displaced Persons (IDP) camps in Borno Central Senatorial District of the immediate past Governor of Borno State and an ally of the Senate President, Senator Shettima Kashim; N400 million for training and support of civilian JTF in Jere/MMC/Kaga Federal Constituencies of Borno State and N300 million for vocational training and provision of empowerment materials to youth and women in Lagos Central Senatorial District of Senator Oluremi Tinubu.

The ‘legislative’ projects to be funded through National Lottery Trust Fund under the Ministry of Special Duties and Intergovernmental Affairs are N100 million for the empowerment of youth and women, purchase of motorcycles, sewing machines, refrigerators and grinding machines in Gombe North Senatorial District of Senator Alkali Saidu and construction of maternity clinic and hospital equipment at Jalingo Ashaka, Funakaye local government area of the same Gombe North senatorial district at a cost of N460m.

For the Ministry of Agriculture and Rural Development, the following senatorial projects are listed for execution and they include N475 million for the procurement of farm implements and accessories in Yobe North Senatorial District of the Senate President, Dr. Ahmad Lawan; supply of farm implements, fertilisers and other empowerment items to farmers at Satame and all the villages, towns in the same Yobe North senatorial zone at a cost of N200 million and construction of rural roads at Gadawa and some selected local government areas within the same senatorial zone to the tune of N900 million.

Under the Ministry of Communications, N100 million was earmarked for the provision of desktop and laptop for skill acquisition and knowledge information and communication technology in Niger East Senatorial District of Senator Musa Mohammed while under the Ministry of Defence, N1 billion is voted for the provision of teaching and instructional materials, books etc for schools in some selected local government areas of the country; supply of laptops and writing materials to secondary schools in Borno State to gulp N500 million while under Open University, N430 million was earmarked for the completion and inauguration of 13 study centres in Kano North Senatorial District of the Chairman of Senate Committee on Appropriation, Senator Barau Jubrin.

However, Chairman, Senate Committee on Media and Public Affairs, Senator Godiya Akwashiki, while responding to THISDAY’s inquiry on the matter yesterday, said he was ignorant of the inserted projects, adding that he is only aware of the N100 billion already voted for constituency projects.

He explained: “What I know is the N100 billion constituency development projects funds from where the Senate got N40bn billion while the House of Representatives got N60 billion. Apart from that, I don’t know whether other insertions were made to the budget because I am not a member of the Appropriation Committee.

“I’m hearing this for the first time. It may be true and it may be false because the chances of senators inserting projects into the budget are 50 and the chances of saying it is not true is also 50. As it is now, the budget has not been signed into law. The proposal comes from the executive and it would still be scrutinised by the executive.

“The Senate Committee on Appropriation told us that they discovered additional revenue, which was not captured and decided to apply it to some departments and ministries. That was the explanation they gave for the increment in the size of the budget.”