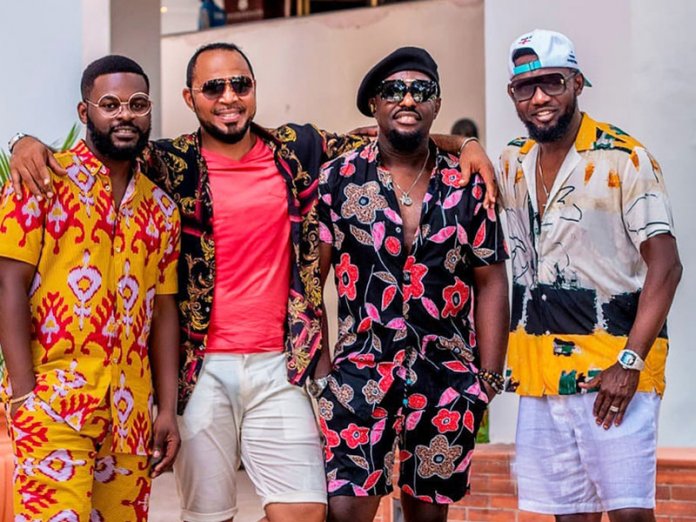 Things have changed for the charming foursome “Merry Men” as they return in yet another mission. The ladies also seem to have taken centre stage in the sequel, restraining the men and beating them at their own game. Ferdinand Ekechukwu reports

They are known as the Merry Men, even though the ladies would prefer calling them ‘Yoruba Demons’. Well, they are back on “another mission”, this time in the Merry Men 2. The Moses ‘Sneeze’ Inwang directed sequel to the star-studded Nollywood movie is packed full of theatrics and stunts. The hit action-comedy movie by popular comedian turned actor/producer Ayo Makun (AY) is schedule for cinema release December 20, but first with an exclusive US screening December 12, and a Lagos premier December 15.

AY recently took to his Instagram page to announce the official trailer of the sequel to his 2018 movie. “The highly anticipated film is the latest from the back to back Box Office blockbuster packages from @aycomedia,” he wrote. AY Makun has to his credit a number of successful Nigerian films, including 30 Days In Atlanta released in 2014 and A Trip To Jamaica in 2016. On opening, the less than three-minute trailer immediately introduces a series of action-packed events that unfold in the upcoming film.

This somewhat contrasts with the glamorous lives of the four main characters, with the posh sports cars and speed boats they use to race each other. First part ‘Merry Men: The Real Yoruba Demons’ which made an estimated N228 million, emerged the highest-grossing Nollywood film of 2018. For the sequel, Ayo ‘AY’ Makun, Folarin ‘Falz’ Falana, Ramsey Nouah, and Jim Iyke return as the Merry Men with Williams Uchemba joining them as the fifth Merry Man.

Things have changed for the charming foursome Merry Men. Set in the Nigerian capital Abuja, Merry Men 2 follows the story of four of the city’s most eligible and notorious bachelors – Remi Martins (Falz), Amaju Abioritsegbemi (Ayo Makun), Ayo Alesinloye (Ramsey Nouah) and Naz Okigbo (Jim Iyke) – on another fast-paced mission. This time though, they may be way in over their head, egged on only by their love for and desperate determination to save Kemi Alesinloye (Rosy Meurer).

The group is known for their thriving businesses, palatial homes, expensive cars and the attention of women in no short supply. They get contracts from the political elite, steal from the rich and give to the poor, but face a big challenge when they go up against a notorious and corrupt politician. They got past that challenge, and now they’re about to go again. With a mix of love, family and friendships, the Merry Men struggle to keep it all together through this epic movie.

The ladies also seem to have taken centre stage in the new film, with clips of the ladies taking charge of the day, restraining the men and beating them at their own game. Also starring in the blockbuster movie is veteran Iretiola Doyle. BBN 2 Alex ‘Unusual’ Asogwa is making her debut appearance in the movie. The second runner up of the Big Brother Naija Season (2) ‘Double Wahala’, Alex hosted the September 2018 Merry Men red carpet which trended on the themed ‘Agbada challenge’.

Billionaire’s wife and actress, Regina Daniels joins the star-studded cast, playing the role of ‘Kenya’, alongside Ufuoma McDermott, Damilola Adegbite and Nancy Isime. In October 2019, Regina shared a poster with the caption: “There is no force as powerful as a woman that wants revenge. In #Merrymen2 the ladies are about to show the guys how it’s done! Guess who gets the paycheck for a perfect payback?”