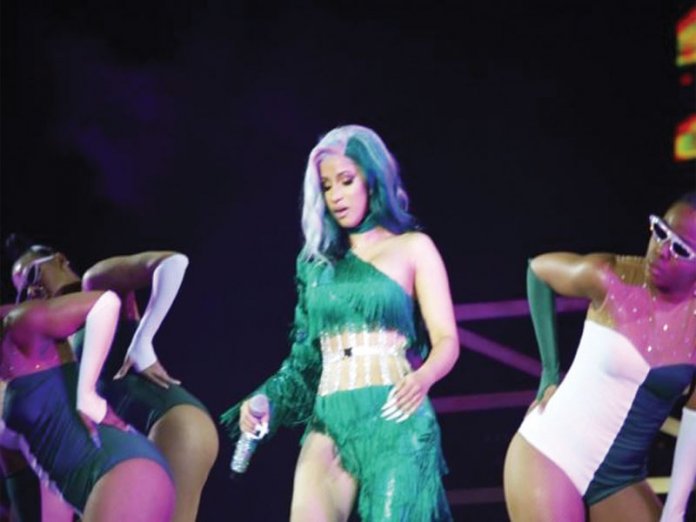 American rapper, Belcalis Marlenis Almánzar, aka Cardi B had an experience of a lifetime in Lagos during her visit to the continent for the LiveSpot X Festival. Ferdinand Ekechukwu reports

From the moment she made known her move to Africa for the first time, for the 2019 LiveSpot X Festival, which held in the African cities of Lagos, Nigeria and Accra, Ghana on December 7 and 8, 2019 respectively, international star Belcalis Marlenis Almánzar, aka Cardi B already left her fans expectant. This would in a way rub off on the trip being her first time on the continent, especially coming to Nigeria.

She was particularly excited, sharing photos and videos on social media from when she set out to the delight of her over 55.2 million followers. The Grammy winning rapper took to her Instagram page on Thursday, December 5, 2019, where she shared a video of herself dancing in a private jet, prior to arriving in Nigeria. In the video, the rapper was seen twerking to an unreleased remix of Davido’s ‘Fall’ on which she featured.

She went on to caption the video with a quote announcing her trip to Africa. “1:03 am drop my KK in NY on my way to Afrriiiiicaaaaaaaaaa baybeeeee!!!!!!” The self-proclaimed ‘Queen of the Bronx’, who’s famous for her hits such as ‘Bodak Yellow’, and ‘Press’ further wrote in an Instagram post: “Africa, I’m coming! Nigeria & Ghana.” She finally arrived Lagos Thursday evening.

The 27 year-old mother of one, on Friday morning went through some media rounds. At Cool FM 96.9 Radio Hit Music Station, her live radio interview with the hosts N6, Taymi B and singer Dare Art Alade, turned out a lengthy conversation ahead of her first headline concert in Africa since her inspiring breakout in 2017 with “Bodak Yellow”. She spoke about herself and daughter. “She really has changed me,” she says of her year-old daughter.

“These things now, I gotta think twice when I got my daughter. I cannot mess up because I will mess up a lot of things for her and I will go to jail,” Cardi narrates, pointing out important decisions her daughter Kulture has made her make. “So I’m like you know what? I gotta change for my kid.” She acknowledged being nicknamed a Nigerian name, Chioma-B.

Just after OAP @taymib named Cardi and boyfriend Offset’s child Kulture “Ayo” (meaning Joy), Cardi B went on to confirm speculations about the current viral video that revealed a surprise verse of Cardi on Davido’s hit song “Fall”. According to her, the song was recorded as far back as nine months ago and her label has something to do with the delay in release. After a full day of media rounds and fan meet-ups, Cardi took to the streets of Lagos taking lots of photos and videos of her experience in the continent’s most populous nation.

One of the highlights of her brief stay in Lagos was her visit to a strip club (perhaps as a reminder of her own days as a stripper). The songwriter was in the company of Nigerian-American singer, Jidenna. She had pulled all stops along the road. Clips of her adventures in the strip club littered the internet and she makes it rain money. As she sprays the bills on happy fans, the strippers, her husband, Offset’s song, “Clout”, on which she featured, plays in the background before it switches to another of her hit songs, “I Like It”.

She also went to check out some art at a gallery where she also received a couple of paintings from fans and artists. Together with her teammates in the early hours of Sunday December 8, met with Nigeria’s celebrity Pencil Artist, Alesh Akeem at Eko Hotel and held a private discussion. On Saturday morning, Cardi B shared a few photos from her visit to an orphanage home on Lagos Island.

She wrote: “Gotta thank the ladies and the gentlemen that nurtured these kids that need just a little bit of more love and protection and gear them up for a better place, destiny and future. People like y’all matter!”

By Saturday evening it was time for the concert which held at the Eko Atlantic City, Lagos, and Cardi B gave an electrifying performance at the LiveSpot X Festival, with the videos from the concert enough evidence to prove that the show was lit. “She gave people what they paid for. Just dey twerk up and down,” remarked a female guest. “Well for the venue, I see so much nudity, my eyes begin pepper me.”

Artistes at the event set included African giants Burna Boy, Niniola, Reekado Banks, Seyi Shay, Patoranking, Teni Makanaki, Tiwa Savage, Fireboy, DML and several other top Nigerian musicians. During the electrifying performance which featured some of her hit tracks ‘Bodak Yellow’, ‘Bartier Cardi’, ‘I Like It That’, ‘Girls Like You’, ‘Money’, ‘Press’, ‘Backing It Up’, ‘Be Careful’ among many others, the rapper donned Nigeria’s national colours, same for her dancers.

Speaking on Livespot X Festival, the Chief Creative Director, Livespot360, Dare Art Alade, had this to say: “We know how much love the fans have for Cardi B and this was one of the reasons we chose to give fans a special experience to see the queen of hip-hop live in Lagos. However, we also are aware of the massive appeal of some of our Nigerian music acts.

“The show will definitely have been incomplete without these music stars, and this is why we all had a great time at LiveSpot Festival”.