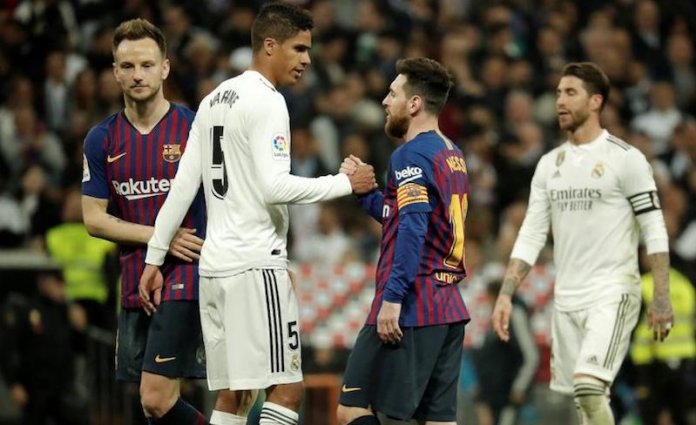 Barcelona’s clash with Real Madrid on December 18 could be thrown into chaos by pro-Catalan independence protestors.

A group called ‘Tsunami Democratic’ have more than 18,000 supporters and have called for them to meet in four different locations close to the Nou Camp before El Clasico.

They plan on gathering four hours before kick-off, which is at 7pm GMT, and have issued a rallying cry on social media.

Many of the supporters also have tickets for the game, meaning there could be increased tension in the stadium.

Originally, the first Clasico of the season was supposed to have been played on October 26 but it was postponed due to security issues in Catalonia.

In the autumn, nine Catalan separatist leaders were jailed and Tsunami Democratic flooded the city’s El Prat airport with protesters, costing millions as it was brought to a halt.

El Clasico is watched by millions of fans all over the world and those protesting inside and outside the stadium could have their pro-Catalan independence message beamed to the masses.

Tsunami Democratic said: ‘In an exceptional situation, it is necessary to act exceptionally.’

‘At this time, an important part of the Catalan population suffers from exclusion for ideological reasons.

‘It cannot exercise fundamental rights without repression, nor can it exercise his right to self-determination. In addition, dozens of people are or have been arrested simply for exercising and promoting these rights.

‘After verifying the impossibility of agreeing with FC Barcelona and Real Madrid CF the opportunity to make visible, in the stands and on the pitch, in an effective form, the call for dialogue that Spain ignores, Tsunami Democratic commits to doing so.

‘For this, Tsunami Democratic convenes a massive concentration on December 18 at 4pm outside Camp Nou. So far, more than 18,000 people have signed up to the call.

‘Many of these people, with tickets or membership [of FC Barcelona], have already received the relevant slogans and have organised to develop the actions planned for a day that will be followed by 650 million people around the world.’