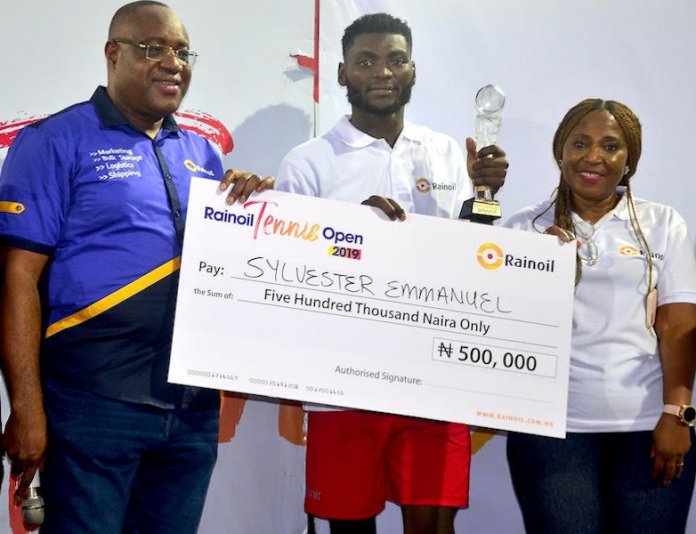 Nigeria’s male and female number one players, Sylvester Emmanuel and Oyinlomo Quadre continued their dorminance of the local scene when they defeated all comers to be crowned winners of this year’s Rainoil tennis open championship which ended on Sunday.

Held at the Clay Court of the Lagos Country Club, Ikeja Lagos, Sylvester defeated men’s singles defending champion, Joseph Imeh by two straight sets of 6/2, 6/3 to emerge winner and cart away the trophy and N500,000 at stake while Imeh got N250,000 for his efforts.

In the women category, Oyinlomo wasted no time in beating old war horse, Christie Agugbom, 6-1, 3-0 (rtd) to take the title and N400,000 prize money while the runners- up got N200,000.
The men’s doubles was won by Uche Oparaoji and Godgift Timibra just as Oyinlomo Quadre and Omolayo Bamidele won the women doubles event.

Winners for the men and women doubles got N250,00 and N200,000 respectively.
Speaking on her victory, Oyinlomo said that hard work and dedication made it possible for her to overcome experienced Agugbom whom she praised for her fighting spirit just as she commended the sponsors for putting up the tournament.

” My victory was due to hard work and dedication without which one can do nothing. I played against an experienced and formidable opponent who does not give up easily and am happy I won at the end of the day “It’s also important I give kudos to my opponent for her fighting spirit. She is an experienced player who must be respected at all time
” I must also commend the sponsors for putting up the tournament because it help to keep players busy and we need more of such tournaments to enable our players be in top form”,noted Oyinlomo who says her next target is to improve her World ranking.

Sponsor of the tournament who also doubles as Group Managing Director/ CEO of Rainoil, Gabriel Ogbechie while congratulating the players and Lagos Country Club for making their facilities available for the tournament, explained that the company decided to sponsor the tournament because of his passion for tennis, promising that they will continue with the sponsorship.

He stated that as part of efforts to help Nigerian players achieve full potential in tennis, his company sent Sylvester Emmanuel to a tennis academy in Spain and have spent over $90,000 on him to aid his development with a promise they will soon go into discussion with Oyinlomo to know what help can be extended to her.

” Apart from having regular tournaments that will keep our players in top shape, it will also move them away from poverty. I believe that if great tennis players in the World today are making close to $100m a year, nothing stops our players from also making money for themselves but this could only be possible through regular competitions”, he concluded.