In less than three months from now, February 2020, precisely, a new governor would mount the saddle at Creek Haven, the seat of government in Bayelsa State. To many, it would be difficult accepting the fact that a constitutionally-elected governor would be sworn in to take over from Governor Seriake Dickson, after the off season election and the resultant court cases demanding for fresh election in the state.

It is, however, becoming very clear that the controversy that trailed the campaigns, the governorship election of November 16, 2019 and the several court cases are becoming worrisome as political observers hold their breath to see if the judiciary can settle the cases before the exit date of the outgoing governor.

The two High Court judgements in respect of the candidature of APCs deputy governorship candidate was clear, as he was disqualified, while the second case was the one brought by Senator Heineken Lokpobiri against the party, alleging that the governorship primary that produced David Lyon was a sham.

The APC lost the two cases but hours to the November 16 election, the court of Appeal cleared the APC to participate in the election. The Appellate court also cleared APCs deputy governorship candidate, Biobarakuma Degi Eremienyo a day to the election, which followed the November 14 stay of execution granted by the Appeal Court on a High Court order disqualifying him. The court ruled that the status quo bellum be maintained pending the hearing and determination of the Motion on Notice to be heard on November 20th.

This came just as the Independent National Electoral Commission (INEC) had responded that though the electoral body had printed the ballot papers for the election, a vote for APC would be null and void when viewed against the fact that the court had ruled against the party’s participation earlier.

Interestingly, the People’s Democratic Party (PDP) which has ruled the state since 1999 dawn of the present democratic dispensation, was shell-shocked, displaced and made to watch in utter dismay as the APC employed all the arsenal, brigandage and federal might to ensure that there was no free and fair election in the state and turned out winners, as declared by INEC.

Indeed, it will be a legal conundrum as both parties  have tough legal hurdles to surmount before the February 14 hand over date to a new governor. The outgoing Governor Dickson said what happened in Bayelsa was not a free and fair election.

“My views and that of observers and all those who have had the opportunity to comment on what happened, not just in Bayelsa, but also in Kogi are all there and they all unanimously said that what took place was not an election. In fact, we are now experiencing a new concept of civilian coup d’etat and I will credit that to the former President Goodluck Jonathan for he was right. That’s the sort of thing that took place in Bayelsa and Kogi.”

To Dickson, it was unfortunate that INEC went ahead to announce the November 16 governorship election results in spite of the brigandage and violence that marred the poll. While going philosophical, Dickson insisted that the election was a charade: “Voting did not hold in places like Nembe, Ogbia, Southern Ijaw and parts of the Yenagoa local government areas. I will liken the recent happenings in the state to my political experience in 2012 when I became governor, but I call on the people to keep faith with God as there would be light at the end of the tunnel. It is at times like this that children of the highest God should praise and worship even more. Don’t give up because you are children of the most high.”

Even as Dickson insisted that the election was more of brigandage and violence, the chairman board of INEC institute Soyebi Adedeji, admitted that the November 16 governorship elections in Bayelsa State was characterised by violence during a public presentation in Abuja on issues of the  election.

Adedeji said there was violence in Bayelsa State and that those who carried out the actions were mostly youths, stressing that if youths could channel their energies towards developing the country’s democracy, life would be better for them than the new trend of violence that is beginning. “We will not fold our arms and pretend that we did not see it by not admitting that there was violence in the last two elections and it is a new trend. We must be honest enough to admit that the elections were marred by violence, especially in Bayelsa State.”

Unfortunately, what happened was a sham called an election when viewed against the facts that the level of violence and coordinated disruption of the electoral process, the total disregard for transparency and the urgent need to review the roles of the security agencies in our electoral policies.

Bayelsa State in particular where I monitored the process was a strong case that points to the fact of the need for a fundamental re-organisation of election security and the agencies, some of which stood by and watched killings, riggings and other malpractice being carried out.

It is worrisome though that elections have become a period when the budget for security takes the huge chunk and security agencies lobby to be posted on election duties due to what they see as ‘free money’. Rather than provide effective security, there was no effective responses from the agents who were paid to provide security. The security agencies watched with hands akimbo while thugs, street urchins and hooligans carried on unchecked.

Bayelsa State, in particular, is a very bad case. Its terrain is as difficult as the people who occupy the nooks and crannies of this Niger Delta state. They are very stubborn, fearless, challenging and easily provoked which makes it equally difficult for any governor to handle the affairs of the state. The truth is that even as there are four main Ijaw dialects in this oil rich Niger Delta state, it is obvious that they don’t drive along those lines but have a strong mind-set that sometimes backfires.

It may not be pretty difficult dissecting the roles played by the political parties, INEC, security agencies, particularly the army, immigration, civil society organisations and monitors.

I may not be wrong to state that the government agencies are some of the reasons why our elections have become a sort of guerrilla war and not because politicians are desperate. Some of these agencies hype and fuel the crises in order to create roles for themselves and be part of the big-budget venture which is always listed under security votes and never captured under any subheading. How can one explain the presence of the police, Army, Navy, the Air Force, DSS, Civil Defence, Road Safety, Nigeria Immigration Service, NDLEA, Customs, EFCC, ICPC, Vigilante, and still there was so much violence in the Bayelsa election.It is no longer a new story that INEC staff run away from violent areas during elections. However, at the end of the day, the electoral umpire recorded 83,000 votes for APC and 874 for PDP in Nembe. Brass also had 23,831 for APC and 10,410 for PDP.

It is quite unfortunate though that most observers are blaming the ‘loss’ of the state to APC to the perceived acrimony between Governor Dickson and former President Jonathan, but from proper observation, the APC played their cards out and used the security agents to have their way. Even if Jonathan had thrown his weight behind the PDP, his people from Ogbia Local Government Area had already made up their mind to queue behind APC which scored 58,016 votes as against PDPs 13,763.

It was beyond any rift, but the inability of a people to do things rightly and freely without recourse to blackmail, brigandage and greed which make them more than transactional in their approach to sensitive issues of governance. It will take quite some time before one understands the pattern of selections, elections and choices made by these people. The governorship candidate of the PDP, Douye Diri whose Local Government Area of Kolokuma/Opokuma for the first time produced a candidate for the highest office of the state, could only muster 15,360 as against APCs 8,934 in an area that has over 50,000 PVCs collection.

With all the problems noticed while on duty in Bayelsa, and with what played out during the polls, it will be tough to argue that the election was free and fair. The truth is that INEC; security agencies know full well that it was a sham. INEC was on ground but folded their arms; the soldiers and security agents indirectly joined the perpetrators of evil to set our electoral development indices years back. 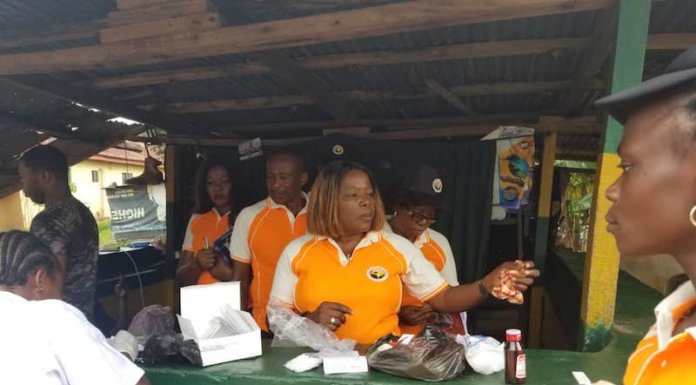