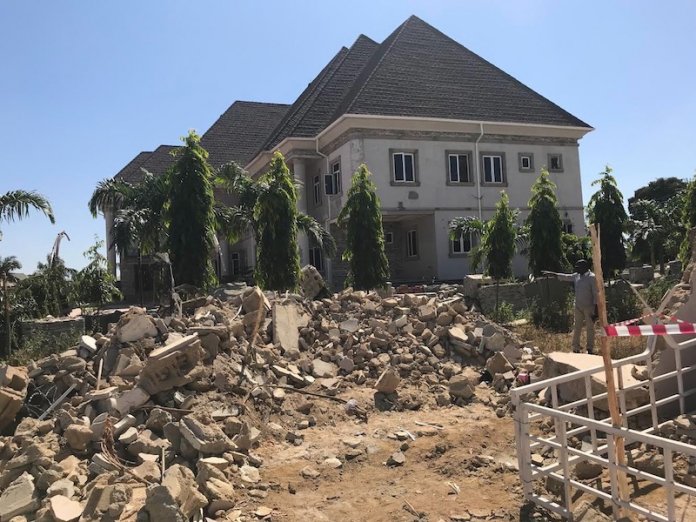 The residents alleged that already “over 300 houses” have been destroyed by KASUPDA in the affected areas namely, Baban Saura, Anguwan Waziri, Karji, Tsohon Kamanzo and Angwan Maigyero, all located along Yakowa road, Kaduna.
The destruction is said to be a warning signal to an impending demolition of the houses said to have been illegally built on layouts belonging to the state government.

A visit to Karji revealed that some of the destroyed houses have either been completed and are being occupied or about to be occupied, while others are still under construction.

The development has unsettled residents of the areas who are apprehensive and having sleepless night over the impending demolition, which will not only lead to monumental losses, but render them homeless.

On a certain Friday, officials of KASUPDA, accompanied by armed security personnel, were said to have stormed the settlements at about 12 midnight with bulldozers and went from place to place destroying some of the houses.
THISDAY findings showed that some of the houses were partially destroyed while in some cases fences were pulled down as warning for the impending demolition.

Mr. Yusuf Zomo, one of the affected persons told journalists in an interview on Sunday that over 300 houses were destroyed by officials of KASUPDA when they visited the areas with their bulldozers.
Zomo who was speaking on behalf of the affected persons said they were shocked when their homes were being pull down at midnight while everybody was asleep.

He alleged that there was no prior notice or warning from KASUPDA before the demolition, adding that no reason had been given for the action. He explained that initially, those with containers on the road were directed to remove them and the directives were complied with.

“But at about 12 midnight on Friday, when everybody was sleeping, they (KASUPDA ) moved in with caterpillars and bulldozers. They were accompanied by armed security men who threatened to shoot anyone who came close to them.
”People were sleeping in their homes when they heard their houses being pulled down and they had to run. If you don’t run out, they will pull down the house on you. People were shouting and running helplessly” Zomo said.

Speaking further, he said, ”If this is a government of the people and they claim that the land belongs to them, why didn’t they come in the day time and talk to us and tell us their intentions. Up till this moment we don’t know their reason for pulling down our houses. We are crying out to the world to hear what the government of Kaduna State has done to us.

“Is Governor Nasir El-Rufai aware of this or not? We are not fighting, we cannot fight them. But we are the ones who voted them to power. If there are no people, there is no government. They should have come in the day time and sought audience with us so that we can discuss and understand ourselves”.

Also in an interview with THISDAY, 65 years old retiree, Mrs. Hauwa Waigot, whose house was also destroyed, said KASUPDA gave approval for her building after she paid the necessary charges.

She said: “Before we started our building, we took our plan to KASUPDA, they asked us to go and pay the charges in the bank. After we paid, they came and surveyed the place. They gave us the go ahead to start our building. They told us that our land is not part of the government layout. That was how we continued with our building. Our file is with them. We paid everything into KASUPDA’s account.”

She stated further that, there was no any warning, or notice from KASUPDA prior to the destruction.
She said she had just finished her building and was preparing to move in when the KASUPDA came with its shocker.

“We spent all our resources on this building, we have finished everything and we are planning to move to the house. Just overnight my children heard news of massive destruction of buildings around the community.

“My children know my health condition so they didn’t want me to know when they discovered that our house was also destroyed. But later on, some people were coming to symphatise with me. That was how I got to know that my house was destroyed.

“I want the government to consider the fact that we are all human beings. I am a retiree. I have spent all my life’s savings on this building to have shelter with my children. If the place is a government layout, we were not informed. KASUPDA gave us the go ahead to build. We paid the money they asked us to pay and they gave us receipts. Government must look into this matter and stop this destruction,” she said.

She pleaded with the state government to look at the situation with human face and consider the consequences of the demolition on the lives of people in this hard times, having spent their resources.

“I know government is for the people. They should have pity on us. If they chase us from this place, where are we going to start from? Whatever the problem is, let it be resolved amicably” she pleaded.

Speaking in a similar vein, a chieftain of the ruling All Progressives Congress (APC) in the state, Godfrey Daniel Kantim, whose house was also destroyed, expressed shock over the incident.

“I am utterly surprised to see this kind of thing. I have never seen a thing like this before. There was no notice and no warning,” he said.

Kantim said he had completed his house which had been commissioned by his pastor and was preparing to pack in when the incident occurred.
According to him, on Saturday, at about 12 midnight, the security man guarding his house called him to inform him of what was happening.

“I drove down and arrived the house around 1:00am and I saw that part of the house, including the fence and electrical fittings were destroyed. I have finished the house, my pastor had prayed on the house, I was just planning to pack in. If the government has interest in the place, they should inform us. When I started this building nobody stopped me.

“When they sold the place for us, we went round for C of O (Certificate of Ownership) and they said they have not given approval for C of O.
You have a family and you struggled to have a place to lay your head with your family only for government to act so drastic.”

Kantim who said he is a law abiding citizen, said he purchased the land from the villagers and that he followed the normal process of buying land.
“I know that the governor, Mallam Nasir el-Rufai is a man will not like to see a thing like this and I believe he may not be aware of this. So I am pleading with him to address this matter with the fear of God. If they drive us from here, where do go?

“We have spent all our resources to build these structures, where do we start from if they drive us away? Are we going to start as terrorists or kidnappers? We are pleading with the governor, we kneel before God and him, to please allow us to stay” he pleaded.

However, in a reaction, the Managing Director of KASUPDA, Mr. Ismaila Dikko, said the houses were illegally built despite several notices warning people to stop building in the area.

According to him, since 2012 the agency issued “stop work notices“ to those who built on the land, but they ignored the notices and continued with their buildings.

Dikko said: “The area is part of the eastern sector gazetted in 1994 with an ordered that doesn’t allow development without planning permission and statutory rights of occupancy.

“Ask if they have any permits before development and our ‘X mark‘ and painting have been all over their properties advising them to stop. We have issued stop work notices since 2012 but they went ahead to build illegally, this is not acceptable.The area has its plan, with schools, cemeteries, markets, police station, hospital, etc, but they decided to build without regards”.

Residents of the affected places are said to be having sleepless night for fear of the demolition.
Kaduna State is currently embarking on “Urban Renewal Programme” which involves the construction/ dualisation of roads and demolition of illegal structures within the metropolis.