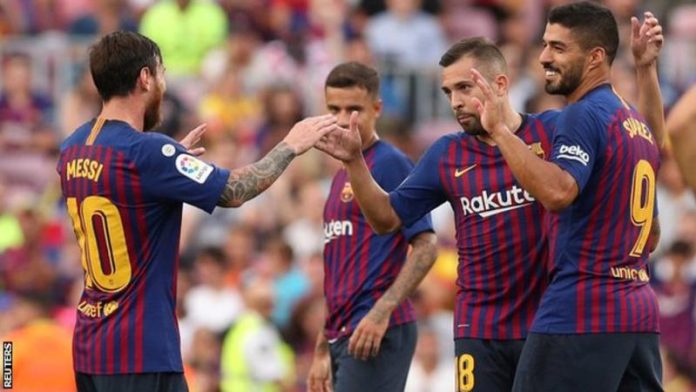 Barcelona visit Atletico Madrid today knowing only victory will return them to the top of the table above Real Madrid.

Despite sitting top of LaLiga on goal difference ahead of Real Madrid before going into the weekend, Barca’s defence has been unconvincing, having shipped 16 goals in 13 games and it will be tested today by an accomplished Atletico side.

Today’s encounter will see Antoine Griezmann return to Atletico for the first time since his controversial summer move to Barca – and he heads there with a point to prove. Griezmann has endured a disappointing start to life at the Nou Camp, which has seen him score just five goals in 17 games this term.

Victory for Atletico, who are three points adrift of the Catalans, will propel them firmly back into title contention.

It has been a strange season thus far for Atletico, with Diego Simeone’s side very much the draw specialists in Spain’s top flight. The capital outfit have shared the points in exactly half of their 14 La Liga outings this season, but no team in Spain’s top flight has suffered fewer defeats (1) this term.

Goals have been a real problem for Atletico, finding the back of the net just 16 times in their 14 league matches. They have the joint-best defensive record with just nine conceded, though, and as mentioned, are currently fourth with 25 points to show from their exertions thus far.

Atletico also have a rotten recent record against Barca in Spain’s top flight when considering that they have not triumphed against this weekend’s opponents in the league since February 2010.

Barca have not been without their problems this season, but the Catalan giants will enter this match off the back of four straight wins in all competitions, including their last two against Celta Vigo and Leganes in the league.

The fact that El Clasico was postponed means that Barca have a game in hand on every side other than Real Madrid, who will travel to Camp Nou for what should be a cracking affair on December 18.

It seems incredible to think that Barca have not lost to Atletico in La Liga since 2010, but the points have been shared in their last two league matches in Madrid.

Atletico have big problems at the back with Stefan Savic, Sime Vrsaljko and Jose Gimenez all out.

The latter has recently returned to training but is unlikely to be considered for today’s match, meaning that Mario Hermoso and Felipe should start as the two central defenders once again.

Key midfielders Saul Niguez and Thomas Partey are available after missing out against Granada last weekend through suspension, but Diego Costa is out until at least February following a neck operation.

Joao Felix played for 35 minutes against Juve after overcoming an ankle injury, though, and the Portugal international could now return to the XI with Angel Correa and Alvaro Morata also starting.

As for Barca, the club are yet to provide a firm update on the injury suffered by Ousmane Dembele against Dortmund, but the France international is unlikely to feature this weekend.

As a result, Griezmann should join Messi and Suarez in the final third of the field, while Gerard Pique will return to the back four having missed the Champions League clash through suspension.

Barca still have issues in the full-back positions, though, with Nelson Semedo and Jordi Alba still injured, meaning that Sergi Roberto and Junior Firpo should keep their spots once again.

Further forward, key midfielder Sergio Busquets will miss out through suspension, handing Valverde a selection dilemma in the middle of the park. Arthur should return to join Frenkie de Jong, while Arturo Vidal will hope to edge out Ivan Rakitic to take the final position.