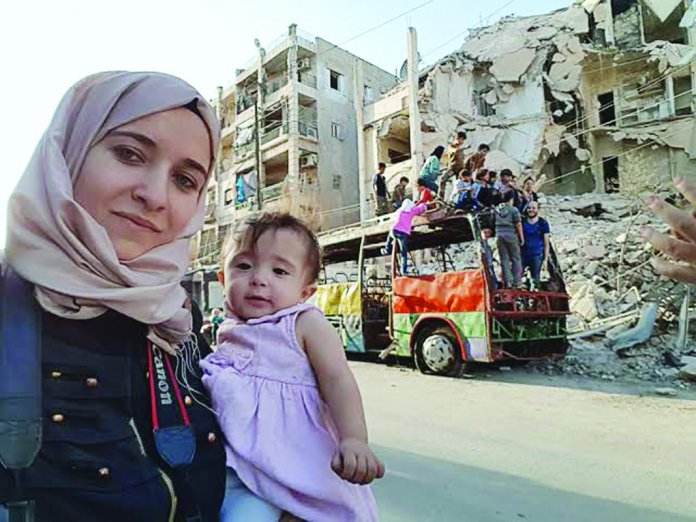 The opening night of the 2019 African International Film Festival (AFRIFF) set the tone for the week-long film feast with this heart-wrenching documentary movie, For Sama. The one hour 40 minutes biopic directed by Waad Al-Kateab and Edward Watts won the best documentary movie award in 2019 Cannes Film Festival amongst other awards. Waad, the narrator is a young film maker who fell in love with Hamza, a doctor and married in Eastern Aleppo amidst shelling and air strikes that characterised a city under siege.

A very disturbing watch, For Sama documents the lives of civilians who were caught in the war between the ruling regime in Syria and the militias who had reportedly taken over parts of Eastern Aleppo. Waad simplified the complicated narratives of the Syrian war by just filming everything that took place from the period of the peaceful protests at the University of Aleppo till it grew to become a national outrage. The civil protests started while Waad was studying economics marketing. Although she had wanted to be a journalist, Syria, for her, was not exactly a place to practise true journalism. She continued filming everything to counter the government’s initial claim that there was no protest in Syria. The revolution started in 2011 with these peaceful protests but it grew from 50 to over 20,000 people.

Waad’s visual account of the war comes from her perspective as a woman, trying to raise her baby in bomb-ridden Aleppo. She moved from being terrified to numb in order to stay calm and courageous. Still, it begs the question of why a government will launch a military action against civilians made up of women and young children. The rules of military engagement do not allow attacks on unharmed civilians. Still, Waad’s footages revealed dismembered children, blood-filled hospital floors, wails of little children who watched their siblings die and other gory sights.  Waad lived and relived the life of sheer contrasts in war-torn Aleppo. Her visual juxtapose of anxiety and humour matched the threatened daily existence with the struggle to save lives. Whilst the regime was destroying the territories assumed to be occupied by ISIS and other militias, and ordinary people got killed, Waad’s husband, Hamza was preoccupied with saving lives at a hospital that he established in Aleppo.

One emotional scene was that of a pregnant woman who was hit during the attacks. Hamza and his team quickly performed a Caesarean Section on the woman to retrieve an almost lifeless baby who was pumped, messaged and butt-slapped desperately back to life.

It was futile to munch popcorn  at Film House Cinemas inside Landmark Village, Victoria Island, while watching For Sama because the viewer can either choke on it or bite his tongue as the scenes of man’s inhumanity to man came in quick succession. Hamza thought there was no better place to stay than eastern Aleppo where there was an urgent need for medical care for the injured. Waad showed the world the untold anguish of an involuntary migrant which is often forgotten as soon as the immigrant assumes a refugee status. The story is to help the viewers empathise with the conditions that had forced others to choose a new home. For Sama teaches a lesson that in the absence of peace, a home is lost.

It’s difficult not to see the parallels between the Syrian situation and other countries in the world where the voice of the people are silenced. According to Waad, all the people wanted in Syria was the freedom to choose who will rule the country.  In many so-called democratic states, the voters are still intimidated by orchestrated electoral violence marked by ballot snatching and burning amongst others.

Back to the movie, life goes on regardless of the devastating situation in Aleppo. A few schools are run in basements to protect children from military attacks. Every underage child in Aleppo seemed to boast of a strong warfare vocabulary. There is no telling of the magnitude of the psychological damage that this lingering war will cause to these young children, who shouldn’t have been victims or eyewitnesses of this unfettered massacre.

The aerial shot of Aleppo revealed well-tarred road network in the maze of monumental ruins. For Sama is not to be misconceived as a total account of the Syrian war because it is a fragment of a side of the story rendered as a love letter to Sama, who may need to understand her identity issues in future. Through its existentialist themes of survival, love and migration, For Sama’s unscripted account of the Syrian war is articulate, harrowing and haunting.

CHARLES SOLUDO – YOU HAVE MY UNBENDING SUPPORT