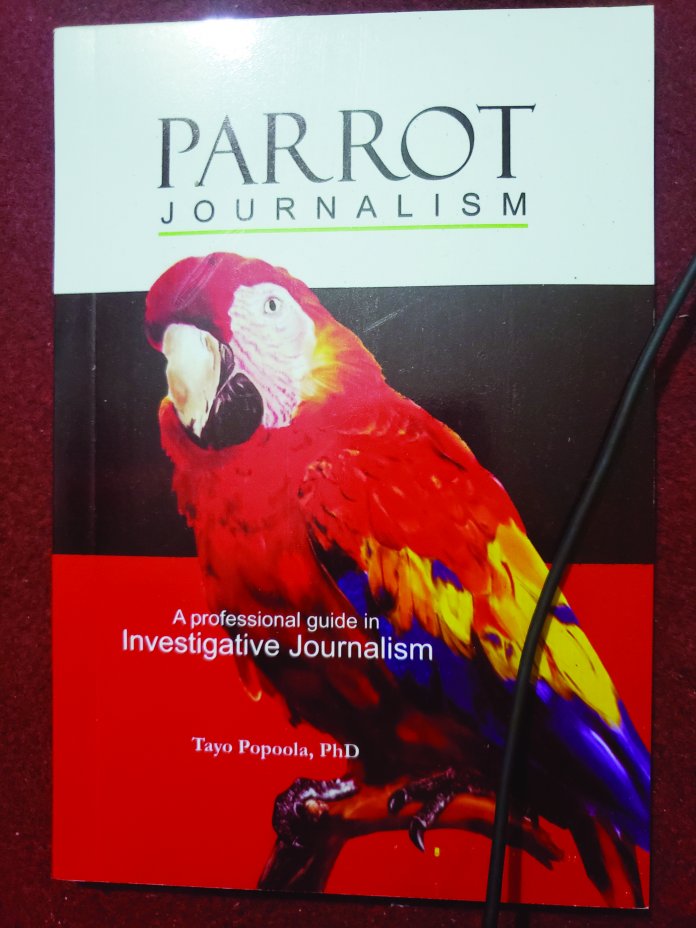 Journalists are increasingly getting caught in conflict situations, leading up to avoidable loss of work equipment, injuries, and in some dire cases, death.

Journalists are often in the middle of opposing forces and either party can turn on the reporter once they feel their interest is not being served. The likelihood of encountering danger rises with investigative journalism, because this is when the reporter becomes really exposed and vulnerable to attacks.

Journalists can still achieve the same results in their investigation and still play safe, according to Dr. Tayo Popoola in his new book, ‘Parrot Journalism: A Professional Guide in Investigative Journalism.

“As a journalist myself, I’ve been thinking about how we can stem the tide of journalists’ assassination, police brutality, oppression and so many other inhuman treatments given to media professionals, not only in Nigeria but also in other parts of Africa and across the world,” said Popoola, a lecturer at the Department of Mass Communication of the University of Lagos (UNILAG)’

He said in the classroom, they try to bridge the gap between the town and the gown, stating that it was in the process of his research into how to “reduce if not completely eliminate the inglorious treatment usually meted out to journalists, not only in Nigeria, but also in other parts of Africa and in the rest of the world.”

The was how he evolved the concept of Parrot Journalism, taking into account the savvy attributes of the very observant bird with high-capacity memory. The Parrot listens unobtrusively to conservations or observes transactions without seeming to, and more importantly, from a safe point.

The author, Dr. Popoola presents the book as a guide to investigative journalism. “We have had so many books on investigative journalism but this is the first of its kind in Africa. The African Red Parrot, especially, is the most gifted bird and it has so many attributes that we need to expose, explore, and we need to equally adopt if we are to stem the tide of journalists’ assassination in the country. The book interrogates the current practice of journalism with notable attributes of the Parrot.

“If all those journalists that have been eliminated had adopted the attributes recommended in this book, then they would have been spared,” he said, citing recent cases of some journalists that were beaten up by security agents who also smashed their work tools.

Journalism, he said had gone beyond the point where reporters must come in close contact with people, particularly during conflict times before they could get a story. “Journalism has gotten to the level that it is not when you move very close to the protesters that you can gather information, and technology has made that very easy.”

One of the Parrot’s attributes comes into play here. In this situation, the Parrot manipulates its iris, pretending to doze, while it records all that goes on. It will divulge it at the appropriate time. However, before that time comes, the Parrot will not move and so cannot be regarded as a threat.to whatever is going on the environment. “You need to adopt that as a journalist; the ability to gather information, retain it, without writing or recording anything for a very long time. It is when you get to the place where you can produce the information.”

Ignoring this simple tactic has caused some journalists untold trauma, as with the photojournalist who was beaten to pulp when he tried to photography people perching on a train illegally at Bolade, Oshodi in Lagos. There are other avoidable incidences that turn really ugly.

The book also talks about funding, a crucial part of investigative journalism. The tip here is that the news medium should sponsor the reporter who is undertaking the investigation.

“The work appeals to two broad categories of people: the student undergoing journalism training and the professional journalist in the field,” says Lanre Idowu, a Fellow of the Nigerian Guild of Editors, in a Foreword he wrote.

Readers will find interesting the recommended ‘Techniques and Tools of Undercover Investigative Journalism; as well as its Constrains and Challenges’.